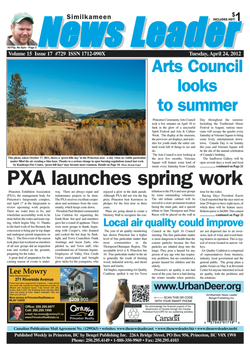 TOWN APPROVES FIVE YEAR PLAN
Where will your property tax dollars go for the next five years? At the April 16 Town Council meeting, the five year financial plan was approved.  The budget for 2012 shows anticipated revenue of $4,968,852 and total expenditures of $4,288,667.  This is the most costly year of the five. Beginning in 2013, revenues and expenditures decline substantially, then show a slight increase in 2016. Revenue from property taxes will come primarily from residential property, at 52.8 percent. Major industry will pay 19.5 percent of the tax revenue, and business and ’other’ will pay 22.8 percent. Property taxes amount to only 30 percent of total revenue sources. User fees amount to 16 percent, and grant funding is 34 percent. Other sources make up 20 percent of the total revenue. None of this information will tell the property owner how much the annual property tax bill will be.  The actual dollar value of the tax bill is based on the mil rate (dollars per $1,000 assessed value), and will include municipal, school and hospital taxes. Taxpayers will receive their bills from the provincial government.


TOWN SEEKS CROWN LAND
The Town of Princeton has applied for several parcels of Crown land for the purpose of rights of way for water and sewer lines. Parcels of land along the Trans-Canada Trail, Old Hedley Road and Highway 5A east of Princeton will be acquired for a sewer line from the industrial park which will link that line to existing sewer lines within the town. The other parcel is located along Bill Miner Way. This area is where the water line has been installed, extending from the new reservoir north of the airport.

COUNCIL DECLARES FREE LANDFILL DAYS
Town Council has designated Saturday, April 28 and Sunday, April 29 as free landfill days. During that weekend,  residents of the town and Area H may take items to the landfill which would ordinarily be charged a fee, but for those two days will be free of charge. These items include such things as furniture and other scrap items not included in the recyclable category. Residents are urged to do a clean-up of property at this time. The purpose of free landfill days is to prevent dumping in unauthorized areas such as over the side of a road or in forested areas. 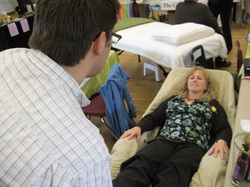 Photo: Arlene Arlow
Irene Highland of Cawston received a reflexology treatment at the 2012 Similkameen Wellness Faire in Keremeos April 14th.  Erik Highland (foreground), a Certified Reflexologist, showed off his craft to many a
happy visitor. The Wellness Faire was held in the Keremeos Victory Hall. 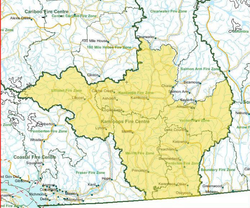 Photo: Kamloops Fire Centre
Effective at 12 noon on Tuesday, May 15, 2012, the size of open fires will be restricted in most of the Kamloops Fire Centre to help prevent human-caused wildfires and protect the public. Since April 1, Kamloops Fire Centre crews have responded to wildfire
incidents covering more than 100 hectares. Many of these wildfires resulted from poorly planned open burning. This prohibition applies to all areas of the Kamloops Fire Centre except the Clearwater and Salmon Arm fire zones. Anyone conducting Category 2 or 3 fires outside of those two zones must extinguish such fires by noon on May 15. This prohibition will remain in effect until Oct. 15, 2012, or until further notice.
Specifically, prohibited activities include:
· The burning of any waste, slash or other materials (piled or unpiled) at a size larger than one metre by one metre.
· The burning of more than two open fires of any size at the same time.
· Stubble or grass fires of any size over any area.
· The use of fireworks or burning barrels of any size or description.
This prohibition does not ban campfires that are a half-metre high by a half-metre wide (or smaller) and does not apply to cooking stoves that use gas, propane or briquettes. This prohibition covers all B.C. parks, Crown lands and private lands, but it does not apply within the boundaries of a local government that has forest fire prevention bylaws in place and is serviced by a fire department. Before lighting any fire, residents should check with local civic authorities regarding any current prohibitions.

JUDGE ORDERS PROBATION
Kevin Lynch, age 40, of Princeton, appeared in Provincial Court in Princeton on April 12 to enter a guilty plea to a charge of breaching probation, and a second guilty plea to a charge of theft.  The breach charge was the result of Lynch failing to report to the Probation Officer as required. The theft charge resulted from Lynch entering a liquor vendor and walking out with a carton of beer he had not paid for. Lynch was ordered to pay a $250 fine plus the cost of the beer, $27.10. He will serve a one year probation with several conditions attached.

FAMILY FAIR DRAWS CLOSER
Thursday, April 26th will mark the 61st anniversary of the Princeton Secondary School Family Fair. The fair raises funds for bursaries for the graduating class of Princeton Secondary School. Last year organizers were able to award over 27 bursaries of $300 each to help with the cost of post secondary schooling. The community has been very supportive in the past and once again the Family Fair Committee is asking for your support for this year’s graduating class. While you are at the fair make sure you check out the Art Show in the school band room. They are hoping to have a good display of artwork from students at John Allison, Vermilion Forks and Princeton Secondary School. The baking table will be offering Mr. O’Malley’s cooking class’s tasty cinnamon buns. These sell out fast so get there early to purchase these freshly made buns. There will also be a white elephant sale, books, baking and more. The ever popular games for the younger members in the family will be manned by the Class of 2012. Tea will be served in the PSS Cafeteria, so you can plan a break from your shopping and meet friends for refreshments while being served by the 2011/12 Princeton Ambassadors. Donations are still being accepted for this event. The Family Fair Committee appreciate all "garage sale" items (no used clothing please), toys and puzzles, plants, books, jewellery and handicrafts – preferably in good clean condition. As well they need donations of breads, buns and baking. Articles may be dropped off at Princeton Secondary School or call Tracey for pick – up at 250.295.7215.

Hot Dogs Sold For A Good Cause! 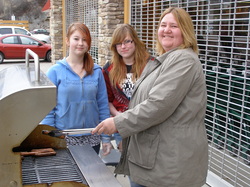 Copyright 2012 Bengel Publishing Inc.
Sarah Nelson, Kayla Dore and Tina Krause sold hot dogs outside Cooper’s Foods as a fundraiser in support of Emily Dickau’s family. The hot dog sale Saturday, April 14th was by donation with between $200 and $300 collected. Cooper’s Foods donated the food and supplies and those who donated were very generous. 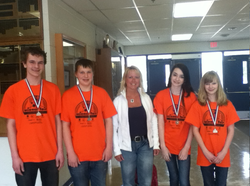 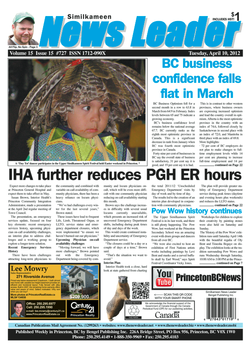 IHA PLANS TO CUT PGH ER HOURS
The following is the News Release issued by Interior Health explaining the situation at Princeton General Hospital:
Princeton General Hospital Emergency Department Update
BACKGROUND
• Providing consistent emergency service at Princeton General Hospital has become increasingly challenging, in spite of our best efforts to recruit additional doctors and locums.
• The situation has recently worsened due to the fact several of the locums we usually rely on are unavailable, and one of our local doctors is no longer able to provide full emergency coverage as of April 1st.
• The result will be more frequent closures of the Emergency Department, which could be during peak periods, in April and beyond.
INTERIM PLAN
• To avoid that scenario, Interior Health has worked with Princeton's community physicians to develop an interim plan that will provide more consistent and reliable service to the residents of Princeton and the surrounding area.
• This plan provides full, uninterrupted Emergency Department coverage for daytime, evening and weekend hours - the busiest hours for the Department.
• We are recommending that the Emergency Department at Princeton General Hospital close between 12 Midnight and 8:00 AM four nights a week, Mondays through Thursdays, as of May 1st, 2012. Interior Health data shows the lowest number of patients, and the lowest number with life threatening
conditions, present to the ED during these hours. Approximately 6.6% of Princeton ED visits occur between 12 Midnight and 8:00 AM.
• Interior Health and the community physicians believe this interim plan is a reasonable option which brings certainty to the community and acknowledges the demands placed upon our current physicians.
• We expect the interim plan may need to be in place for approximately one year while longer term solutions are sought.
PATIENT CARE
• Our intention is to install a telephone at the hospital entrance so anyone arriving at the hospital will have the ability to call 9-1-1. BCAS will continue to have ambulances stationed adjacent to the hospital.
• When the ED is closed, BCAS bypasses Princeton and delivers patients directly to Penticton Regional Hospital (PRH) or another site that can provide a higher level of care. Patients needing life saving care are always transported to a larger centre.
• Interior Health recently established a dedicated high acuity response team (HART) based at Penticton Regional Hospital. BCAS can dispatch this team when they determine it's best for the patient's care. HART members are highly trained critical care nurses who respond with a BC Ambulance Service (BCAS) basic life support team. A respiratory therapist assists as required.
• If community residents have any health concerns when the ED is closed, they should call 8-1-1 (HealthLinkBC) for round the clock health information, or they should call 9-1-1 for an ambulance.
• Interior Health's goal continues to be providing 24/7 coverage at Princeton General Hospital. 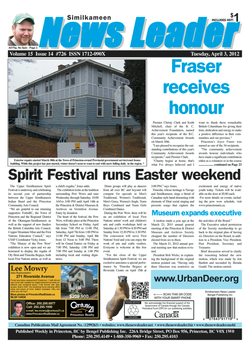 TOWN LOOKS AT NEW ZONING
A new zoning bylaw will eventually lead to the establishment of a single-family residential with secondary suite zone. The Zoning Amendment Bylaw was giving first and second reading at the March 19th regular meeting of Town Council and now advances to the public hearing stage. On February 7, 2011 council adopted Bylaw No. 845, 2010, which provided for the addition of definitions, conditions and regulations for the inclusion of secondary suites within residential properties. The bylaw made provision for secondary suites to be permitted within the RD Two Family Residential Zone – the only zone currently permitting secondary suites. “A special single family residential zone does not currently exist,” Chief Administrative Officer Patrick Robins states in his report to council. “To date three applications have been received and processed on individual basis.” A public hearing will be scheduled later this month before the bylaw amendment can be adopted.

PXA PLANS BIG WORK PARTY
Princeton Exhibition Association plans a work party for April 21 that will bring out members from all of the user groups. The goal of the day, in addition to clean-up, is to have all of the user groups inspect their areas and make a list of things that need repairs or replacement.  Plans to renovate the grandstand are top priority, but there are many projects that need to be done. Town Council has been invited to participate in the work party inspection tour, and to join the members of the groups for a potluck lunch. 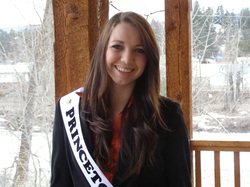 Copyright 2012 Bengel Publishing Inc.
Ciara is a 16 year old proud Rebel PSS student who was born in Princeton. She enjoys art, the great outdoors, volunteering in the community, and has a huge passion for sports. After graduation she hopes to be playing post secondary basketball on a scholarship; it has been a goal of hers since grade eight and she is very driven. Her volunteering with children has inspired her to attend University to become a teacher or counselor. She is proud to be sponsored by the Royal Canadian Legion and wishes best of luck to all the candidates.

WorkZone Comes To An End!

Photo: Arlene Arlow
Chris Blais of the WorkZone in Keremeos agreed to have his picture taken one last time before the facility closed March 31st. Chris plans to return to his first love, Orchard Management. Chris would like to remind you that the furniture, computers, desks and other office items will be for sale during the upcoming Wellness Faire on April 14th at  Victory Hall. Who knows, maybe Chris himself will be hanging around on
April 14th and you can wish him well on his new endeavours.