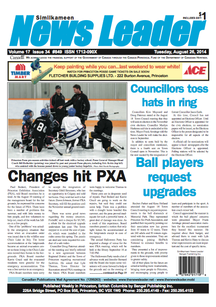 COUNCILLORS TOSS HATS IN RING
Councillors Kim Maynard and Doug Pateman stated at the August 18 Town Council meeting that they will seek re-election in the November civic elections. Councillor Marilyn Harkness said she is undecided at this time. Mayor Frank Armitage told the News Leader he will make his decision in September. In addition to seats held by the mayor and councillors mentioned,  there is a fourth seat on Town Council open in November. This is  the seat vacated by the resignation of former Councillor Jason Earle. At this time, Council has not appointed an Elections Officer.  Until an Elections Officer is appointed for the civic elections, no nomination papers will be issued, as the Elections Officer is the person designated to be responsible for all aspects of the  election. An official call for nominations will appear in local  newspapers after the Elections Officer is appointed. Polling stations will be selected by the Elections Officer.

BALL PLAYERS REQUEST UPGRADES
Reuben Parker and Kesa Holland attended the August 18 Town Council meeting to request improvements to the ball diamonds at Memorial Park. They represented Princeton Slo Pitch Association, and justified their request by pointing out their association now has grown from 10 teams to 12 teams. There are 240 adults and 50 minors registered with the association. They are considering joining SloPitch National to enhance benefits to members. They presented a list of improvements to the grounds, with priority given to those improvements related to greater safety. All of their plans for the future are aimed at holding more  tournaments, bringing more people to Princeton, and encouraging young people to learn and participate in the sport. A number of members of the association coach minor ball. Council appreciated the manner in which the ball players' concerns  were presented. Mayor Frank Armitage praised association members for the excellent tournament they hosted this summer. He inquired about their budget, and advised them to meet with Lyle Thomas and Kevin Huey to discuss what improvements are most important and the cost of specific items. 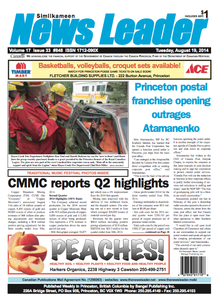 IMPROVEMENTS CONTINUE ON HIGHWAY 3
Motorists who use Highway 3 between Princeton and Hope will see some significant safety improvements in the Saturday Creek area, thanks to construction activity that is getting underway. A 1.8-kilometre stretch of the highway located approximately 22-kilometres southwest of Princeton will be widened from two to three lanes to provide an eastbound passing lane and realigned to improve sightlines.  The project will also improve access to several forestry roads by relocating accesses and widening the intersections.  Construction of 2.5-metre paved shoulders and drainage improvements will improve safety for pedestrians and all other road users. "The Highway #3 Mayors Coalition is pleased to see the provincial government moving forward on this important part of the region's highway system. The improvements between Princeton and Hope have been a long term priority of the Coalition, and are a necessary step toward the economic development along the Highway #3 corridor. Local mayors have worked hard to identify priority road work along Highway 3," said Fraser-Nicola MLA Jackie Tegart. "I'm looking forward to working closely with them in the future to ensure our road network is safe for everyone and supports job creation in the region." Hoban Construction Ltd. has been awarded a $7.85 million contract to carry out the project, scheduled to be completed in September 2016. Motorist disruptions and delays are expected to be kept to a minimum and negligible changes to the speed limits are anticipated during construction.

TOUR ENDS IN KEREMEOS
by Arlene Arlow
Members of the 2014 ALS Cycle Of Hope took time to sign each other's uniforms for posterity August 13th in Keremeos. The week-long awareness tour officially started in Kamloops. Cyclists visited Salmon Arm, Vernon, Kelowna, Penticton, Osoyoos and finally Keremeos where they were hosted at the Grist Mill for lunch. This is the third year that the event toured the Okanagan and Similkameen. Robin Farrell of Victoria organized this year's tour and is pleased that the participation has grown each year. "We started out with six people three years ago," Farrell said. "Last year we had ten cyclists, this year we had twelve." The awareness tour is not a feat for the out-of-shape.  Participants must commit to a six-month training regime. Training includes thrice weekly cycling tours with long uphill grades. Many of the participants have a friend or family member who has been impacted by what is otherwise known as Lou Gehrig's disease. Robin is grateful for the behind-the-scenes help. "We had hotels to stay at along the route. Accent Inns and Trek Bicycles sponsored this year's tour." 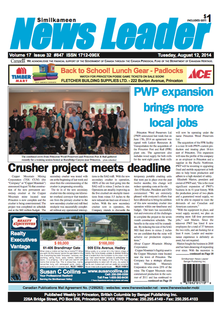 CRUSHER PROJECT MEETS DEADLINE
Copper Mountain Mining Corporation (TSX: CUM) (the 'Company' or 'Copper Mountain') announced August 7th that construction of the new permanent secondary crusher at the Copper Mountain mine located near Princeton is now complete and the crusher is being commissioned. The project was completed on schedule and at the $40 million budget.  The secondary crusher was tested with ore at the beginning of last week and since then the commissioning of the crusher is progressing smoothly. The tie in of the new secondary crusher into the existing one kilometer overland conveyor that transfers ore from the primary crusher to the new secondary crusher and mill feed stockpile was successfully completed without any operational interruptions to the SAG mill.  With the new secondary crusher in operation, 100% of the ore feed going into the SAG mill is minus 2 inches in size. Operations are steadily improving as the live crushed ore stockpile transitions from minus 5.5 inches to the new reduced ore feed size of minus 2 inches. With the new secondary crusher now in operation, the Company intends to dismantle the temporary portable crushing units that were put in place over the past twelve months; this change will reduce operating costs at the site. Jim O'Rourke, President and CEO commented: "We are extremely pleased with everyone's efforts that have allowed us to bring the addition of this new secondary crusher into operation within our timeframe and budget.  Our team has successfully met and overcome all the challenges to complete the project in the seven month construction schedule.  The benefits to the mine will be immediate.  By reducing the size of the SAG Mill feed down to minus 2 inches we are confident that the mine will achieve our production expectations."

NEW CHILDCARE SERVICE OPENS
Living  Water Community Child care announced last week the opening of their before and after school childcare centre.  The service will provide care for ages 5 to 12 years in their beautiful location at 38 Kenley Avenue in the downstairs of Living Water Community Church. The program is managed by Eirich Innjbor who comes to Princeton with a bachelor of Elementary Education from the Philippines, a certificate in Health Science Education and Special Education.  She is a very outgoing and capable young woman and loves children. The Living Water Community Childcare program is  fully licensed with the B.C. Government and is able to provide lower income parents with subsidies through the Government process.  Childcare rates are very reasonable and they are looking forward to providing childcare in a safe, happy and very beautiful environment. "We are currently taking applications and look forward to having your child in our centre," says Esther Donovan of Living Water Community Church. "We can provide full time, before and after school care, also part time care depending on your needs," she adds. "We also provide a discount for multiple children in the same family that can help with the parental costs." In the event of a continuing teachers strike they are prepared to offer full day childcare starting in September at very reasonable rates until the strike is settled. For more information contact the new service via e-mail at livingwatercc@eastlink.ca or call 250-295-7733. 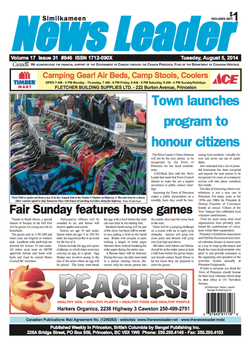 RDOS RELEASES SELECTED HIGHLIGHTS
Selected highlights from the regular meeting of the Board of Directors of the Regional District of Okanagan-Similkameen held Thursday, July 17. Complete minutes of the meeting will be made available to the public following adoption at the next scheduled Board meeting August 7, 2014. The Regional Board adopted bylaw No. 2650.01, 2014 RDOS Fees and Charges Amendment Bylaw. Fee and charge changes are to Temporary Use Permit applications submitted between July 1, 2014 and July 1, 2015 to be charged a reduced fee of $350.00. After July 1, 2015 the application fee would go back to $700.00. Building permit fee changes will be to title and on-line document searches costing $50.00, and non-electronic documents from Land Titles Office will be $100.00. Bylaw 2602, 2014 RDOS Mosquito Control Extended Services Amendment bylaw was adopted by the Regional Board. The Regional Board gave the first three readings of the bylaw in February which would amend the funding formula within the existing bylaw which currently provides a formula for the Mosquito Control program based on the field time spent averaged over the previous three years. With the inclusion of 2011 figures which include Provincial West Nile funding, the 2014 taxation would not represent the intent of the formula. Administration recommended that for 2014 only, the formula for funding the Mosquito Control program based on the 2012 and 2013 field time average.

SIZZLE CONFIRMS ENTERTAINMENT
The Similkameen Sizzle organizing committee met July 30th to solidify some of the elements planned for their 13th annual celebration on September 20th. Entertainment Director Jeff Lakey confirmed at the meeting that all live musical groups have been booked and confirmed.
The schedule of performances was set as follows:
8:30 - 11:00 AM Corner Turtles
11:45 - 1:30 PM Mat Duffus
1:45 - 2:30 PM Xlr8er
3:00 - 5:00 PM The Blackbirds
Final details are still being put in place for additional activities including a pancake breakfast, vendors, the chili cook-off and hot pepper eating contest. The Similkameen Sizzle committee this year is made up of a very small handful of dedicated volunteers who see potential in hosting the annual pepper festival. Details and entry forms for vendors are available at the Sizzle website located at www.gotpeppers.info. 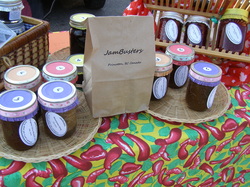 Copyright 2014 Bengel Publishing Inc.
The weekly 'farmers market' on Highway 3 at Bridge Street in Princeton has an interesting cross section of offerings. There's homemade jams, jellies, preserves, soaps, lotions, breads and buns. There's handicrafts including clothing and jewellery. There's even farm-grown produce and some new and used items. They have collectively called themselves a Trader's Market and are on-site Saturdays from 8:00 AM to 2:00 PM.