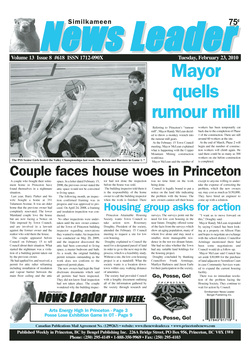 PUBLIC DID NOT OPPOSE
On February 15, Town Council held a public hearing on a proposal for rezoning property located to the rear of Fields Store. The hearing asked for anyone opposed to the rezoning to speak out and give the reason for opposition. There were a number of questions in regard to the use of the lot for parking and some concerns about noise. There was no major opposition to the rezoning. The proposal was made by the owner of the land along Bridge Street between Harold Avenue and Angela Avenue where the construction of a supermarket is in the planning stage.

COUNCIL REFUSES OBJECTION LETTER
A local group known as Save Our Similkameen (SOS) appealed to Town Council to sign a letter directed to PetroBank expressing opposition to further coal bed
methane exploration. Council refused to sign the letter SOS had prepared. The reasons for the refusal had
nothing to do with Council’s opinion on the matter of coal bed exploration. Council would not sign any
letter not written on Town of Princeton letterhead, and did not believe it was appropriate to send a letter to PetroBank. As Councillor Frank Armitage pointed out, PetroBank is just doing business. The letter should go to the Ministry of Mines and Energy who sell the permits. It is up to Council to contact the Ministry to voice any opposition to continued coal bed methane exploration in the Similkameen Valley. Council unanimously supported a motion to do that, with a copy to the Ministry of Environment and PetroBank. In addition to sending the letter, Council will take the matter to the Similkameen Valley Planning Society to see if Indian Band Councils, Regional Directors and the Village of Keremeos will support similar action on behalf of Similkameen Valley residents. 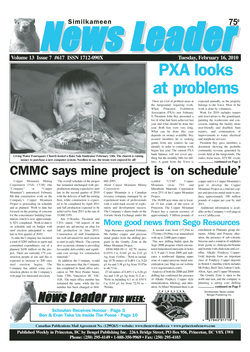 MUSEUM PLANS MAY OPENING
The renovation and expansion of Princeton Museum has been delayed again, leaving the Museum Society no option but to leave the expansion plan until after the Princeton 150th anniversary celebrations. The museum will open for the long weekend in May, and will close in September. The work on the museum will be done next winter. While this was a big disappointment for all Museum Society members, they will go ahead with their customary arrangements for the tourist season. Operations manager Nick Mills is currently applying for grants to hire three students for summer employment at the museum. Museum Society executive members will meet with the Town of Princeton to discuss a number of matters of interest to both, including the matter of a lease for the museum building. At the Museum Society regular meeting held February 9, members were pleased to receive a letter from Alex Atamanenko wishing them success in facing the challenges of the coming year and offering to help in any way he could. Mills reported a continuing flow of e-mail inquiries, most of which pertain to information about family history. An author is requesting items from the archives. He has used the museum archives information in the past. Members hope he will make a donation to the museum in consideration of the work done on the author's behalf. There was discussion of when the Granite Creek cemetery clean-up would be done. It had been scheduled for autumn 2009, but inclement weather prevented the work. The clean-up calls for removal of some trees. It is likely to be done this spring. Jon Bartlett brought to everyone's attention an online course in the basics of archival practice. The course costs $300 - $400 and would prove useful to the Museum Society if a member wanted to take the course. Bartlett also advised members there will be a presentation on local mining history by Randy Manuel, former curator of Penticton's museum. Manuel will speak at Riverside Centre on February 23 at 7:00 PM. The next meeting of the Museum Society will be held on March 23. 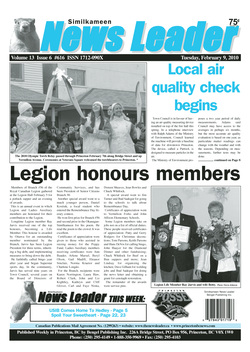 LOCAL AIR QUALITY CHECK BEGINS
Town Council is in favour of having an air quality measuring device installed on top of the fire hall this
spring. In a telephone interview with Ralph Adams of the Ministry of Environment, Council learned the machine will provide a baseline of data for downtown Princeton. The device, called a Partisol, is designed to measure particles in the air. The Ministry of Environment proposes a two year period of daily
measurements. Adams said Council may have access to the averages in perhaps six months, but the most accurate air quality evaluation is based on one year, as particulate matter readings can change with the weather and with the seasons. Depending on measurements, further tests may be done. Members of Council and Area H Director Brad Hope expressed concern
based on a background of citizen complaints about emissions from the local pellet plant. Hope reminded Adams of a report Adams made to Regional District saying the pellet plant had harmful emissions. Adams replied there is a difference between measurements of what is
being emitted and what is actually falling in the area. 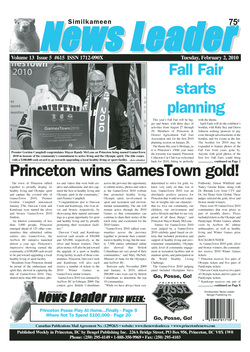 PRINCETON WINS GAMESTOWN GOLDThe town of Princeton rallied together to proudly display its healthy living and Olympic spirit and capture the coveted title of GamesTown 2010, Premier Gordon Campbell announced January 27th. Dawson Creek and
Kamloops were named the silver and bronze GamesTown 2010 finalists. An Interior community of less than 3,000 people, Princeton emerged ahead of 123 other communities that submitted online entries into GamesTown, the ActNow BC initiative launched
almost a year ago. Princeton’s impressive showing earned the community a $100,000 cash award to be put toward upgrading a local healthy living or sport facility. “Residents from Princeton should be proud of the enthusiasm and spirit they showed in capturing the
title of GamesTown 2010. They shared more than 600 stories, photos and videos that were both creative and enthusiastic and also captured the best in healthy living and Olympic spirit in the community,” said Premier Campbell. "While we have always been very determined to strive for gold, we knew very early on that, win or
lose, GamesTown 2010 was an absolutely positive process for Princeton that would reveal a number of insights into our character - that we love our community, our children, our environment and active lifestyle and that we are very proud of all these things,” said Princeton Mayor Randy McLean.