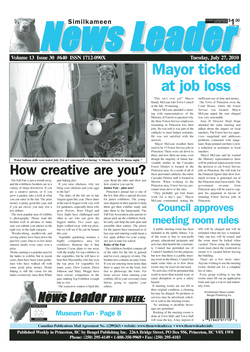 FAIRGROUNDS MANAGEMENT GROUP LOOKS AT FAIRGROUNDS
Princeton Exhibition Association, the volunteer management group for the fairgrounds facility, met July 20 at the fairgrounds office. The most recent activity at the fairgrounds was the ATV/BC poker run weekend. According to all reports, everything went well, and the group left the grounds quite clean. This does not mean there is nothing to do at the grounds. There is a problem with weeds in the infield, which needed to be addressed before the long weekend as the Tulameen Turtles geo-caching group will be on site. In addition to the weed problem, there are a number of chores that need to be done before the Fall Fair. The Fair Association will be holding work parties to do some of the work, but there is a lot to be done in general grounds upkeep. A really big job is replacement of the perimeter fence between the south corner and the barn entrance road. President John Bey estimated $30,000 to do the job right. There was a lot of discussion regarding why the PXA has to pay insurance on the grounds, as the PXA does not put on any events. Councillor Jason Earle, Town Council liaison with the PXA, said the reason is that municipal insurance does not cover the grounds, despite the fact that the grounds are owned by the Town of Princeton. This has been an ongoing discussion for several years, and there never seems to be an answer that satisfies the PXA. As the bull riding finals will not be held in Princeton this year, Fall Fair President Keith Olson asked for permission to use the grounds on September 11 for a major flea market/garage sale. Permission was granted. The Fall Fair Association has met with success in holding these community sales, and the one planned for September 11 will be the last of the year. The next meeting of the PXA will be held on August 17 at the fairgrounds office at 7:00 PM. Anyone interested in the operation of the fairgrounds is welcome to attend.

COUNCIL RAISES CAMP RATES
On July 19, Town Council gave first, second and third readings to a bylaw to increase rates at the municipal campground. The new rates will be more in line with current rates charged at other commercial campgrounds. An RV or tent site with power and water will cost $25 a night, or a tent site without services will cost $20 a night. A monthly rate will be $450. There are rates set for individual services such as sani-dump, showers, extra vehicles or extra persons. A picnic site costs $2.50 per person.

COUNCIL PRAISES AIR SHOW
Councillor Ray Jarvis, along with Nadine McEwen and Patrick Robins and their crew of volunteers, received a great deal of praise from Town Council for the success of the third annual Princeton Air Show. McEwen said she counted 1,023 people attending the event, but she reckoned there were more. On the evening before the event, a get-acquainted social was held for the pilots, and everyone enjoyed this gathering. Since the air show, pilots have e-mailed Town Hall to express how much fun they had at the show, saying it was one of the best shows they had participated in.

Let's Check Out The Museum! 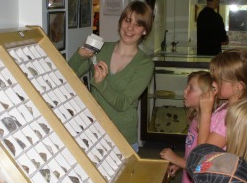 Copyright 2010 Bengel Publishing Inc.
Princeton Museum on Vermilion Avenue is a favourite stop for many visitors during the summer. One of the main attractions is the complete section of rocks, fossils and minerals contained in the Joe Pollard Wing. Pollard collected the specimens - many from the local area - over a number of years. His entire collection was donated to Princeton Museum following his death. 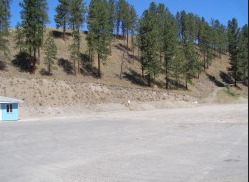 Copyright 2010 Bengel Publishing Inc.
Town Council has begun the legal process to use provincial government and school district land to create a Bike Skills Park. The park will be developed on land adjacent to the arena on the east side between the Posse clubhouse and Highway 5A. Part of this land is highway right of way, and part belongs to the school district. The Bike Skills Park will utilize part of the slope down from Princeton Secondary School to construct a challenging course for bikes. 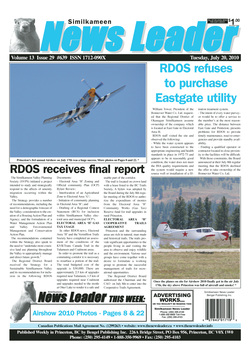 WOMAN LOSES LICENSE
Pamela Shields appeared in Provincial Court in Princeton on July 15 to enter a guilty plea to a charge of driving while impaired. She was apprehended following a report of a domestic dispute in progress. When police attended, they saw her drive away and suspected she had been drinking. They sent out a bulletin and Shields was later stopped and her breath was tested. She failed the test. Shields had no prior convictions, and was ordered to pay the minimum $1,000 fine and surrender her driver’s license for one year.

RDOS REFUSES TO PURCHASE EASTGATE UTILITY
William Tower, President of the Bonnevier Water Co. Ltd. requested that the Regional District of Okanagan Similkameen assume ownership of the company which is located at East Gate in Electoral Area H. RDOS staff visited the site and observed the following:
- While the water system appears to have been constructed to the appropriate engineering and health standards in place in 1972-73 and appears to be in reasonably good condition, the water does not meet the IHA quality requirements and the system would require a new source well or installation of a filtration treatment system.
- The intent of every water purveyor would be to offer a service to the member’s at the most reasonable price. The distance between East Gate and Penticton; presents problems for RDOS to provide timely maintenance, react to emergencies and provide standby availability.
- Finding a qualified operator or contractor located in close proximity to the facilities will be difficult.
With those constraints, the Board announced at their July 8th regular meeting that the RDOS declined the offer to take ownership of the Bonnevier Water Co. Ltd.

GRIST MILL CELEBRATES CANADA POST STAMP
by Dave Cursons
On July 23rd at 1:30 PM the Keremeos Grist Mill and Gardens welcome the public to a special ceremony. It’s a celebration of a the Keremeos Grist Mill Commemorative Stamp issued in January by Canada Post. Rika Ruebsaat and Jon Bartlett of the Princeton Traditional Music Society will sing traditional songs while local dignitaries join the public in the festivities. A Canada Post commemorative plaque will be presented to the Keremeos Grist Mill and Gardens. Representatives of the newly revived Similkameen Branch of the Okanagan Historical Society and of the South Similkameen Museum Society will be on hand for the event. The Grist Mill Heritage Site, acquired on behalf of the people of British Columbia, was restored by the BC Heritage Trust in the 1990’s. In 1877 Barrington Price established this mill by Keremeos Creek, where for some twenty years it served pioneering families.

So Close You Can Almost Touch It! 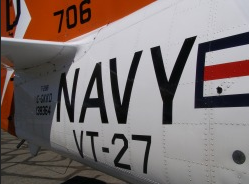 Copyright 2010 Bengel Publishing Inc.
The aircraft on the tarmac at Princeton Airport were on display so you could get up close and personal like we did, or you could pose in front of one for a photo. It was all part of the third annual Princeton Airshow on July 17, 2010. 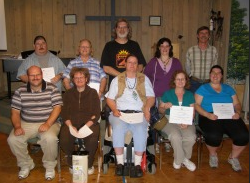 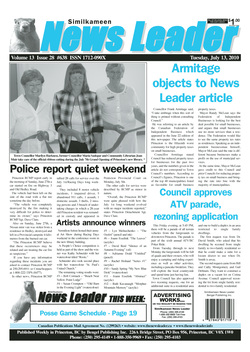 ARMITAGE OBJECTS TO NEWS LEADER ARTICLE
Councillor Frank Armitage said, “I take umbrage when this sort of thing is printed without consulting Council.” He was referring to an article by the Canadian Federation of Independent Business which appeared in the June 22 edition of this newspaper. The article states Princeton is the fifteenth worst community for high property taxes on small businesses. Councillor Armitage stated Council has reduced property taxes for businesses for the past two years, and the numbers given in the article do not correspond to Town Council’s numbers. According to Council’s figures, Princeton is one of the top 40 municipalities listed as favorable for small business property taxes.

ACCESSIBILITY GROUP BOGGLES TOWN COUNCIL
Princeton Accessibility Awareness Committee sent a letter to Town Council asking for four handicapped parking spaces to be designated in the downtown core. These new requests followed a lengthy list of requests sent to Town Council earlier this year. Councillor Jason Earle stated the new requests should be added to the previous list and taken care of as time and money permitted. Councillor Marilyn Harkness suggested that the new request may be a priority, and may push back the other things requested. Mayor Randy McLean said the first list is “encyclopedic” and the new requests just add to it. He commented on the lack of parking spaces available downtown to meet the Princeton mindset that wants to park right in front of any store they plan to enter.

MINISTRY OFFERS IDEAS FOR HIGHWAY 3
Mayor Randy McLean reported to Town Council on July 5 that there is the possibility of improvements to the Hope-Princeton highway. At a recent meeting of mayors from towns along Highway 3, with two MLAs and four members of the Highways Department, the Highways representatives outlined ideas for removing tight corners at Friday and Saturday Creeks, making the highway wider, and increasing speed limits along new straight stretches. Mayor McLean said the idea is to fill in the corners with rubble from widening the highway, then re-routing the traffic along the newly filled area, something like constructing a causeway. 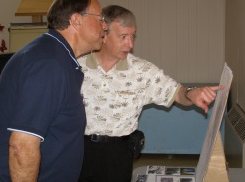 Copyright 2010 Bengel Publishing Inc.
The annual Blakeburn Reunion was held July 9th and 10th in Princeton. Dozens of former Blakeburn residents gathered in Princeton Legion Hall on Saturday, July 9th to share stories and memories in a 'greet and meet' informal setting. Local historian Terry Malanchuk, pictured on the right, led many reunion attendees and other interested Princeton residents on a historic walking tour of the ghost town Blakeburn on Sunday, July 10th. 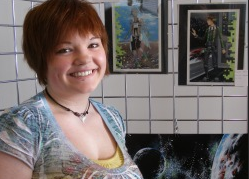 Copyright 2010 Bengel Publishing Inc.
Rachel Hoiland, pictured, and Adrianne Dodds received bursaries last year from the Vermilion Artists. One of the interesting things about receiving a bursary from the local art group is that the recipients also get to host a showing of their artwork the following summer. Hoiland and Dodds had their show July 9th and 10th in the Conference Room of the new library building on Vermilion Avenue. 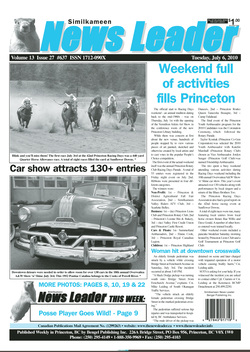 The official start to Racing Days weekend - an annual tradition dating back to the mid-1960s - was on Thursday, July 1st with the opening of the Vermilion Artists Art Show in the conference room of the new Princeton Library building. While there was concern at first about the new venue, hundreds of people stopped by to view various pieces of art painted, sketched and otherwise created by local artists and to cast votes in the popular People’s Choice competition.

The first event of the actual weekend itself was the annual Princeton Rotary Club Racing Days Parade.  A total of 53 entries were registered in the Friday night event on July 2nd. Ribbons were presented in four different categories.

The final event of the Princeton Youth Ambassador program for the 2010 Candidates was the Coronation Ceremony, which  followed the Rotary Parade. Taylor Kostiuk (Princeton Co-Gen Corporation) was selected the 2010 Youth Ambassador with Katelin Marshall (Princeton Rotary Club) chosen as Vice Ambassador. Jordyn Senger (Princeton Golf Club) was named Friendship Ambassador. The trio spent a busy weekend attending various activities during Racing Days weekend including the 10th annual Overwaitea/A&W Show ‘n’ Shine car show. This year’s event attracted over 130 vehicles along with performances by local singers and a return of the Blues Brothers Too.

The Princeton Racing Days Association also had a good report on the 42nd horse racing event at Sunflower Downs. A total of eight races were run, many featuring local entries from local horse owners Renee Rae Willis and Dave Gould. A number of other horses entered were trained locally. Other weekend events included a pancake breakfast Saturday morning hosted by Princeton Lions Club and a Golf Tournament at Princeton Golf Club. 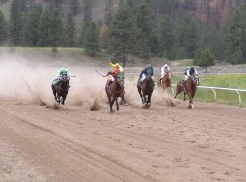 Copyright 2010 Bengel Publishing Inc.
The first race of the 42nd running of Princeton Racing Days at Sunflower Downs July 3rd was a 440 yard Interior John Deere Bonus Challenge Quarter Horse Allowance Race. It was the first of eight races scheduled for the day. 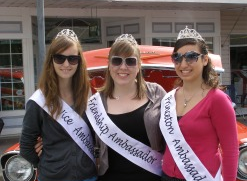