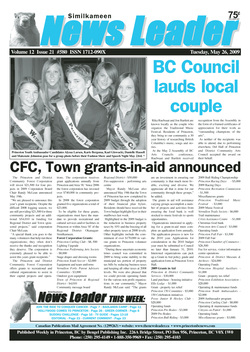 TOWN COUNCIL BRIEFS
A company called Jameson Resources is interested in buying coal property from Compliance. The property is located at Blakeburn, near Coalmont. Jameson Resources plans to export coal. If the deal goes through, it could mean 40 to 50 new jobs.

Radio needs adults - Students from Princeton Secondary School have received grants to set up their student radio station. They are looking for adults who would be willing to volunteer their time to work with the students.

Message board - A computer-controlled message board for downtown has met with approval from Princeton Performing Arts, who have donated $500 to the project. The theatre group will give a bursary this year to a local grad planning to study dramatic arts. Princeton Racing Days Association has added their $500 to the message board project. If they could use the board today, they would be telling local residents they need people with experience working in the parimutuels. If you can volunteer for this duty, please call John Bey or Carol Ruoss.

Deer count - The Ministry of Environment scheduled a deer count for last weekend to find out how many deer are in town.

Fire protection - Persons noting forestry activity in the Snowpatch area will be pleased to learn this is part of the Wildfire Protection Plan. The work is taking place on private property and will clear out dead wood. Council discussed other areas where dead wood should be removed, such as on the slope between the arena and the high school.

Airport - Councillor Marilyn Harkness praised the work of the Airport Committee. She had toured the new fuelling facility and reception area. Plans are going ahead for a great celebration at the second annual Airport Day on July 18. 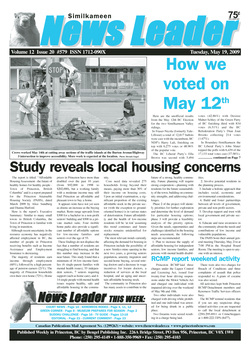 STUDY REVEALS LOCAL HOUSING CONCERNS
The report is titled: “Affordable Housing Assessment - the future of healthy homes for healthy people - Town of Princeton, British Columbia” and is a report prepared for the Princeton Attainable Housing Society (PAHS), dated March 2009 by Alice Sundberg and Dianna Hurford. Here is the report’s Executive Summary: Similar to many small towns in British Columbia, the Town of Princeton is familiar with living in transition. Although recent uncertainty in the resource economy has negatively affected employment in BC, the number of people in Princeton receiving benefits such as Income Assistance and Employment Insurance is decreasing. The majority of residents earn income through employment (60%), followed by a high percentage of pension earners (21%). The majority of Princeton households own their own home (72%). Home prices in Princeton have more than doubled over the past 10 years (from $92,000 in 1998 to $202,000), but a working family with a moderate income may still find Princeton an affordable and pleasant town to buy a home. It appears rents have not yet seen as drastic an increase as the buying market. Rents range upwards from $300 for a bachelor in a non-profit seniors' building and $500 in a private market suite. Four mobile home parks also provide a significant number of affordable options for low-income families and seniors over the age of 55. These findings do not displace the fact that a number of residents are struggling to find housing, and that this number may increase in the near future. This study found that a minimum of 16 low-income families (6 single-parent families with mental health issues), 55 independent seniors, 7 seniors requiring support (such as home care), and 4- 14 single people with mental health issues require healthy, safe and affordable housing in the community. Core need data revealed 275 households living beyond their means, paying more than 30% of their income on housing costs. Upon an initial examination, a significant proportion of the existing affordable stock in the private sector (with the exception to groundoriented homes) is in various states of deterioration. Future affordability and the health of low-income residents will be ‘at risk’ assuming this trend continues and future stocks remains unidentified for replacement. The most relevant trends currently affecting the demand for housing in Princeton include the possibility of a new Similco mine opening in the next two years, a growing seniors population, amenity migration and second-home buying, several retiring doctors and a decrease in wage incentives for locum doctors, a reduction of services at the local hospital, and an aging and uncertain affordable housing stock. The community in Princeton also has many assets to contribute to the future of a strong, healthy community. Future planning will require strong cooperation—planning with residents for the future sustainability of the town, building on community strengths, and addressing challenges. Phase 2 of the project will identify priorities for further exploration and determine the level of demand for particular housing options; phase 3 will provide a feasibility analysis of the priority option. Given the needs, opportunities and challenges identified in the housing needs assessment, the following steps are recommended: 1. Plan to increase the supply of affordable housing for independent seniors, low income families, and persons with mental health disabilities. 2. Involve potential residents in the planning process. 3. Include a holistic approach that includes social, economic and environmental considerations. 4. Build and foster partnerships between all levels of government, private and non-profit sectors. 5. Develop rapport and trust with local government and private sector. 6. Educate and raise awareness in the community about the needs and contributions of low income and vulnerable populations. The PAHS hosts their annual general meeting Thursday, May 21st at 7:00 PM in the Hospital Board Room. The meeting is open to anyone with an interest. 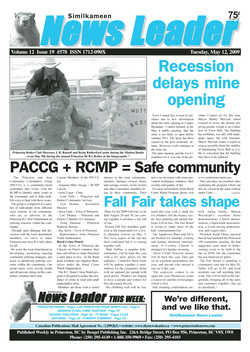 RECESSION DELAYS MINE OPENING
Town Council has revised its priorities due to new information about the mine opening at Copper Mountain. Council learned, at the May 4 public meeting, that the mine is not likely to open before summer 2011. The delay has been caused by the poor economic climate. However, work continues at the mine site. The mine opening, and the Town’s readiness for it, was one of the priorities Council set for this year. Mayor Randy McLean asked Council to revise the priority list, giving greater weight to an evaluation of Town Hall. The building has problems, not only with inadequate space, but with structure. Mayor McLean wants a report as soon as possible about the viability of maintaining Town Hall as it is. He is concerned that the building may have to be replaced.

COUNCIL SIDESTEPS AMBULANCE REQUEST
Town Council received a letter from Ambulance Paramedics of B.C. asking for support. The paramedics are currently bargaining with the provincial government to bring wages into line with other emergency service employees. The ambulance paramedics letter stated the paramedics are currently the lowest paid emergency service workers, receiving only $10 an hour, with an on-call standby wage of $2 an hour. The government asked for a 90 day delay before negotiations continue, and the ambulance paramedics wanted Council’s support by passing a motion requesting the provincial government go back to the bargaining table with a third party mediator. Council took the position that they had no business taking a position of attempting to influence the outcome of a labour dispute, and filed the letter. 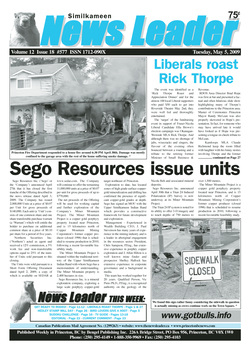 LIBERALS ROAST RICK THORPE
The event was identified as a ‘Rick Thorpe Roast and Appreciation Dinner’ and for the almost 100 local Liberal supporters who paid $50 each to get into Riverside Theatre May 2nd, they were well fed and thoroughly entertained. The ‘target’ of the fundraising event in support of Fraser-Nicola Liberal Candidate Ella Brown’s election campaign was Okanagan-Westside MLA Rick Thorpe. And although there was no shortage of jabs, wisecracks and zingers, the flavour of the evening often bounced between a roasting and a
tribute to the retiring former Minister of Small Business & Revenue. RDOS Area Director Brad Hope was first at bat and presented a factual and often hilarious slide show highlighting many of Thorpe’s contributions to the Princeton area. Master of Ceremonies Princeton Mayor Randy McLean was also properly skewered in Hope’s presentation. In fact, for someone who may have arrived late it would have looked as if Hope was presenting a tongue-in-cheek tribute to McLean. Kamloops MLA Claude Richmond keep the room filled with laughter with his funny stories involving Thorpe and the former Speaker of the Legislative Assembly. At one point Richmond quipped, “Rick is a hard worker. Not very effective, but a very hard worker,” which kept the crowd entertained. Richmond did take the opportunity to take a shot at the Referendum on Electoral Reform (the STV vote) and had probably the funniest line during the evening when he stated; “The STV is like a STD, very nasty and difficult to get rid of.” Penticton Mayor and RDOS Chair Dan Ashton and Keremeos Mayor Walter Despot also took their turns with the most entertaining of the speakers being Thorpe’s Administrative Assistant Mike Reid. Reid, who has held that position for the past 13 years, described in great detail his joining ‘TA’ a support group for former staff and employees who have survived working with Thorpe. Reid himself admitted the key to his longevity was linked to his answering “Yes, Minister” to everything Thorpe has asked of him over the years and the ability to cover any follow-up questions with reasonably plausible answers. Then it was Thorpe’s turn. First on his list was a complete roasting of RDOS Area H Director Brad Hope for choosing Australian wines over Similkameen Valley wines to be served during the evening. He also roasted Princeton Mayor Randy McLean for being the biggest whiner of the three Similkameen Valley political heads at the function. Then he roasted Keremeos Mayor Walter Despot for his fears related to the Mobile Business License Program. In all, it was a fun evening full of good-natured barbs and pokes where everyone, including the designated targets, had an opportunity to laugh at themselves and the sometimes silly things that happen while participating in the complex game of politics. Thorpe did state he appreciated the working relationships he had developed with local politicians and enjoyed working with them. “It’s been a pleasure to help your community get the things that really matter to you.”