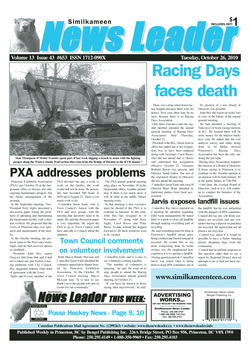 COUNCIL SELLS INDUSTRIAL LAND
Mayor Randy McLean announced on October 18 the sale of three parcels of land in the industrial park. “Three offers have been accepted for the industrial park and two are pending,” he stated at the public meeting. Another economic issue he addressed was a program called “economic gardening” which he believes would be of real benefit to local businesses. Economic gardening is a program developed to expand and nurture local businesses. It originated in a small town in the United States in 2006 and has been successful. It is an alternative to communities spending large sums trying to attract industry from outside the community.

GISBORNE MOVES TO FAIRGROUNDS
Gisborne Industrial Construction is the General Works Contractor for the Copper Mountain Mine construction project. Gisborne has been looking for accommodation for its workers but has been unable to find sufficient rooms for its workers. In response to the problem, Gisborne met informally with Mayor Randy McLean, Public Works manager Henry Rykers and John Bey, President of Princeton Exhibition Association, the group managing the fairgrounds facility. A verbal agreement was reached which will see Gisborne move portable bunkhouses onto the fairgrounds to hook into existing fairgrounds utilities. The date of occupancy has not been finalized, pending acquisition of the portable structures. The temporary building complex will have a site manager and its own security.

COUNCIL WANTS GREYHOUND SERVICE
Having parcels delivered to Hedley via Greyhound is not a pleasing alternative to having a parcel depot in Princeton. At the October 18 meeting of Town Council, the problem was discussed. The Town is having to pay somebody to travel to Hedley on the weekend to send Princeton’s water samples to the Okanagan laboratory where the samples are tested for monitoring safe drinking water. Council has been advised the operator is working toward re-establishing a parcel depot in Princeton. Council decided to write a letter to Greyhound saying how important it is to Princeton to have a parcel depot. 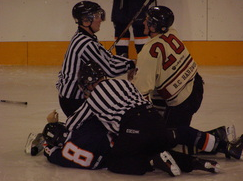 Copyright 2010 Bengel Publishing Inc.
Princeton Posse had a tough week of games at home. They played host to Osoyoos Coyotes Tuesday, October 19th losing 4-1 and almost tied Beaver Valley Nitehawks Friday, October 22nd coming from a 4-1 deficit at the start of the third period to finish the game on the short end of a 5-4 score. 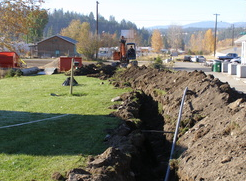 Copyright 2010 Bengel Publishing Inc.
Work began last week on the project which will eventually see lighting along the stretch of the Trans-Canada Trail through Princeton from the Bridge of Dreams all the way past Similkameen River to the Tunnel. Trenching was completed more than three-quarters of the way by Friday, October 22nd. 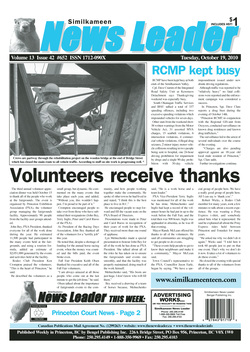 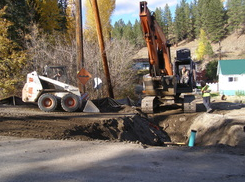 Photo: Brenda Engel
Work continues in and around Princeton on a number of public works projects. Water main/sewer projects have disrupted traffic in some neighbourhoods the past couple of weeks with many of those projects completed this week. Other neighbourhood received delays related to paving projects on area streets. 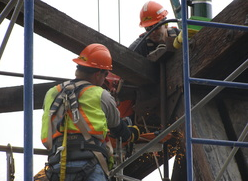 Copyright 2010 Bengel Publishing Inc.
The Town of Princeton closed the wooden bridge to vehicle traffic October 4th to allow for a rehabilitation project. The repair work to the structure centres on the replacement of long metal pipes that hold the bridge together and is expected to last a total of five weeks. One member of the work crew to the News Leader that work has been progressing well and no major problems have been encountered.

Alysha Harker Wants To See You! 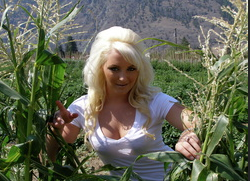 Copyright 2010 Bengel Publishing Inc.
She's a small town girl from Cawston, BC and we've been following her career for years. Now's your chance to show some support!

HI Everyone,
I wanted to invite you personally to my live show on Sunday, October 17th at the famous Roxy Night Club on Granville Street in Vancouver.

I'm opening up for "Midnight Cowboys" who are an amazing country band. I'd love for you to come and whomever else can make it.

Tickets are $15.00 that includes a beverage and all proceeds go to an up and coming movie filmed in Vancouver that has my song in it "Fly or Fall". The show starts at 8:00 PM. Thanks! 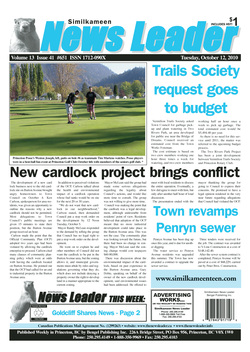 NEW CARDLOCK PROJECT BRINGS CONFLICT
The development of a new card lock business next to the old cardlock site on Burton Avenue brought angry homeowners to Town Council on October 4. Ken Carlson, spokesperson for area residents, was given an opportunity to outline the reasons why a new cardlock should not be permitted. Most delegations to Town Council’s public meetings are given 15 minutes to state their position, but the Burton Avenue group received an hour. Carlson made the point that the Official Community Plan (OCP) adopted two years ago had been violated by allowing the cardlock enterprise to proceed. Carlson cited many clauses of community planning policy which were at odds with having the cardlock located on Burton Avenue. He pointed out that the OCP had called for an end to industrial property in the Burton Avenue area. In addition to perceived violations of the OCP, Carlson talked about the health and environmental impact of a cardlock operation whose fuel tanks would be on site for the next 20 or 30 years. “We do not want that new cardlock in our neighbourhood,” Carlson stated, then demanded Council put a stop work order on the development by 12 Noon Tuesday, October 5. Mayor Randy McLean responded to the demand by telling the group that Council has no legal right to put a stop work order on the development. He went on to explain he and other members of Council did not want the cardlock to be put in the Burton Avenue area, but the zoning allows it, and municipal governments must abide by rules and regulations governing what they do, which does not include denying a property owner the right to develop land in a manner appropriate to the current zoning. Mayor McLean said the group had made some serious allegations regarding the legality about Council‘s actions, and would like more time to consult. The group was not willing to give more time. Council was making the point that the cardlock was a legal development, although undesirable from residents’ point of view. Residents believed that adoption of the OCP meant that no more industrial development could take place in the Burton Avenue area. This was not the case. The community plan
was looking toward the future, but there had been no change in zoning. Mayor McLean said the zoning change would cost taxpayers $60-80,000. There was discussion about the environmental impact of the cardlock, based on past experience in the Burton Avenue area. Gary Dobie, speaking on behalf of the owner of the new cardlock development, said environmental issues had been addressed. He offered to meet with local residents to discuss the entire operation. Eventually, a few did agree to meet with him, but only after another half hour of loud discussion. The presentation ended with the mayor thanking the group for going to Council to express their concerns. He promised to have a legal opinion rendered in the very near future regarding allegations that Council had violated the OCP.

PAY TO USE FIRE HYDRANT
Local residents who want to use water from a fire hydrant may do so, but it is going to cost $100 for opening and closing the hydrant valve, which can be done only by a member of the Town works crew. In addition, anyone using the hydrant will pay $20 per day rental. This is a new amendment to the water rates and regulations bylaw. Town Council has approved first, second and third readings of the amendment. Anyone wishing to use water from a hydrant must apply for a permit at Town Hall.

September Student of the Month 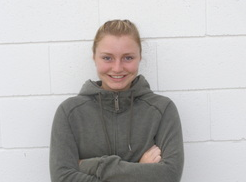 Copyright 2010 Bengel Publishing Inc.
Her name is Meagan Haayer and she was selected as Princeton Secondary School's Student of the Month for September. The grade 12 student was nominated for her efforts in organizing a pep rally - which included meetings held during Summer Break. The Student of the Month program is sponsored by PSS PAC.

From Hockey Sticks To Golf Clubs! 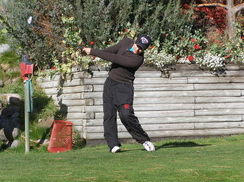 Copyright 2010 Bengel Publishing Inc.
Princeton Posse's Brett Serpico (#20) shows fine form teeing off at hole #7 at Princeton Golf Club October 6th. He and a number of teammates played local seniors in a best-ball tournament. The inter-generational event awards seniors with game tickets to see the Princeton Posse play at Princeton Arena. The event has been organized the past few years by Tip Anderson. 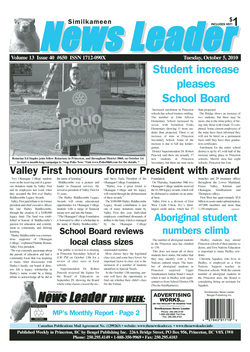 BOARD APPROVES LIFE AFTER HIGH SCHOOL
A survey funded by Human Resources Development Canada will be in our local secondary school in May and June next year. The survey seeks responses from
both students and counsellors to determine what non-financial barriers prevent students from seeking post-secondary education. Grade 12 students will be asked about their knowledge of post-secondary education options, student aid, and the student’s perception of the merits of applying. They will be asked if they had applied or expected to apply to post-secondary
education and for aid, and what supports or barriers they experienced while applying. If they have applied, they will be asked the outcome of their applications, if known. Student surveys will cover the following topics: schooling and labour market expectations, knowledge of post-secondary costs and potential benefits, understanding financial aid, awareness of
post-secondary options, familiarity of the process of applying for post-secondary admittance and financial aid, and other pertinent data. All responses will be confidential.

BOARD OKAYS MENTORING PROGRAM
Students may be mentoring other students soon in the Merritt area. Big Brothers Big Sisters of Canada, Kamloops branch, has offered to partner with School District #58 (Nicola-Similkameen) to begin a program in which secondary school students become mentors to elementary school students. The students will meet at lunch hour and engage in activities of common interest. Students wishing to enter the program will be screened and trained according to established child safety standards. The Board of Education has approved the program for the Merritt area schools only, although the Board
desires to have the program in Princeton schools. At this time, the distance from Kamloops to Princeton is too great for adequate monitoring. 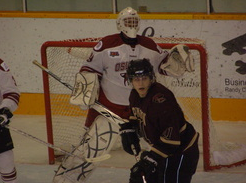 Copyright 2010 Bengel Publishing Inc.
Fans got to see 70-minutes of hockey October 1st at Princeton Arena as the Princeton Posse hosted Osoyoos Coyotes. The Posse trailed 3-2 after one and 5-2 after two and came back in the third to tie the game at 5-all, then again at 6-all with only 5.2-seconds left on the clock. Two 5-minute overtime periods were played with no additional scoring. 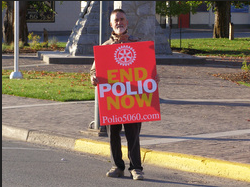 Copyright 2010 Bengel Publishing Inc.
Princeton Rotary Club kicked off a campaign hosted by District 5060 to "End Polio Now" with local Rotarians waving large signs in various locations around Princeton to get the word out. Ed Staples was waving his sign on Bridge Street downtown near Veterans Square early October 1st. The Rotary Club will be asking the Town of Princeton to proclaim October as "End Polio Now" Month.