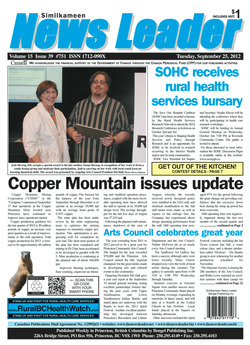 FAIRGROUNDS USERS MAKE WISHES
The three main groups who put on events at the fairgrounds - Rodeo Club, Racing Days Association and Fair Association - are forming ‘wish’ lists to present to Princeton Exhibition Association (PXA), management body for the fairgrounds.  The wish lists consist of improvements the groups would like to see done for 2013.  The PXA budget will be based on the priorities set at the October meeting, when all of the wishes have been presented. The September 18 PXA meeting began with President Paul Bedard expressing how pleased he is with the way so many people turned out to help for each event during the past few months.  Prior to each event, work parties have been a mix of people from all of the user groups as well as PXA members and other volunteers. Five major events have taken place at the fairgrounds this year: Princeton Rodeo, two horse racing events, Little Britches Rodeo and the fair.  One more event is scheduled, the community Halloween party on Saturday, October 27.  During the following week, the fairgrounds will be shut down, except for the horse barn area. There was discussion about the grandstand project, and the need to find a qualified person to develop the specifications for the project before asking for bids.  Completed projects include repairs to a number of locations, a new roof on the ‘saloon’ building, completion of the fencing project, painting of some buildings, repairs to barns, and the removal of pine trees that had created hazardous conditions during wind storms.  Racing Days Association President Karrie Crucil asked for, and received, permission to organize a group of volunteers to rebuild the 4-H animal pen area. Fair Association President Dan Kastor commented on the excellent report the fair received this year from a provincial fair judge, who said it was one of the best fairs she had judged this year. Unfortunately, attendance at the fair was down this year, likely due to having it on Labour Day weekend. Rodeo Club President Ken Crompton had a lot to say about the condition of the fairgrounds facility, saying the Town must take a greater role in assuring enough money to keep the grounds in top condition to attract additional events.  Karrie Crucil agreed, saying she knew of one group who were interested in putting on a major event in Princeton but went elsewhere due to poor conditions on the fairgrounds.  PXA would have made a big rental profit had this group chosen to hold their event in Princeton. The next PXA meeting will be held at the fairgrounds on Tuesday, October 16, at 7:00 PM.  At that time, everything on the wish lists will be prioritized so that the budget can be set for 2013.

COUNCIL SAYS NO TO HUT
A letter to Town Council from Ground Search and Rescue (GSAR) expressed concerns about rejection of a proposal put forward to build a Quonset hut at the airport and a rental fee of $600 per month. GSAR noted other communities in our area charge much less. Representatives of GSAR attended the September 17 Town Council meeting and were advised by Councillor Jason Earle to go to the Airport Select Committee and discuss the matter with that committee. Council was firm on rejecting the construction of a Quonset hut on the airport property.

COUNCIL WILL ATTEND EDUCATION MEETING
Two Councillors, Jason Earle and Doug Pateman, will attend the October 4 community dialogue on what future grads should be required to know.  The invitation to Town Council from the school district outlines several areas for discussion at the community meeting. The meeting will be held at Princeton Secondary School Library at 7:00 p.m. Questions to be answered at the October 4 meeting include defining what core subjects should be required for graduation, what other choices should be available to students, what competencies should be demonstrated, and what rewards students should be given.

She Turns Kid Into Batman! 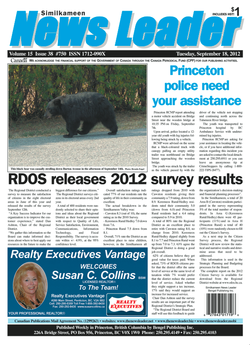 RECORD BRINGS HIGH FINE
Having a previous record of 24 hour suspensions cost Anthony Richard Upton a little extra when he entered a guilty plea to an impaired driving charge. He was apprehended on May 12, 2012, by police conducting a routine road check on Bridge Street. He failed the roadside check and went to the detachment office where he blew .210 and .190.  In Provincial Court in Princeton on September 13, he was sentenced to pay a $1,200 fine plus victim fine surcharge, and is prohibited from driving for 12 months. The judge warned Upton he would do jail time on the next impaired conviction.

GIRL TROUBLE ENDS IN FIGHT
On March 3, 2012, friends of Jonathan Sullivan went to his house for the evening, which included alcohol consumption. During the evening, Sullivan left his residence with the girlfriend of James Apps. Subsequently, Apps accused Sullivan of sleeping with Apps’ girlfriend. There was more than one incident of accusation, and while at his mother’s house, Sullivan was again approached by an angry Apps and a fight ensued, during which Sullivan grabbed a knife to defend himself.  Sullivan was later charged with assault with a weapon. On September 13, in Provincial Court in Princeton, Sullivan entered a guilty plea to the charge and was ordered to pay a $600 fine, and was placed on probation for 12 months.

The Blackbirds Sizzle In Keremeos! 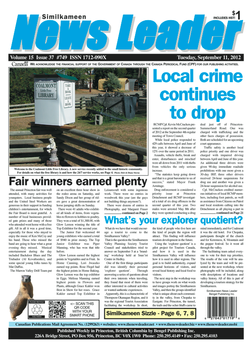 TOWN PROVIDES FIRE PROTECT TO ROCKRIDGE CANYON
Town Council approved a Fire Protection Agreement between Young Life of Canada (RockRidge Canyon) and the Town of Princeton at the September 4th meeting of Council. The purpose of the three-year agreement was to extend fire protection services to the RockRidge facility within the RDOS Area H Fire Protection District, which was originally requested in February of this year. The RDOS gave their consent to the Town of Princeton to enter into a fee for services contract with Young Life of Canada and the Municipal Insurance Association has confirmed the Town’s insurance coverage will apply to the provision of this extra-territorial service. The fee for services contains two components: an annual fee of $1,200.00 as well as an hourly response rate to calls. That rate will be determined from the current Office of the Fire Commissioner Reimbursement Rate Schedule. The motion to approve the agreement with RockRidge Canyon was moved by Councillor Maynard and seconded by Councillor Earle. Documentation provided at the meeting did not indicate when the agreement would take effect. 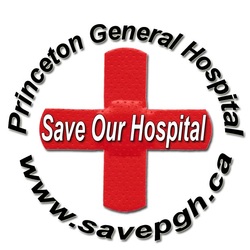 The Princeton Save Our Hospital Coalition started selling memberships this week. The SOHC is in the process of becoming a stronger force within the community and in order to be run as a proper society has started a membership drive. Memberships are just $2.00 per year and membership cards are available. Similkameen News Leader is selling SOHC Memberships at our downtown Princeton location at 226A Bridge Street. 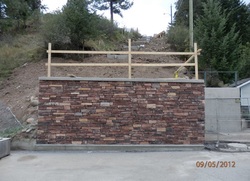 Copyright 2012 Bengel Publishing Inc.
The zigzag project in downtown Princeton took on a new cosmetic look this week. The mural painted on the retaining wall at street level was sandblasted off and replaced with a rock wall of cultured stones. The stone work was completed in less than a day. 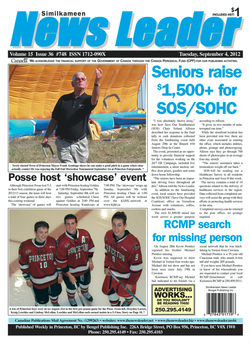 GROUP TACKLES FARM WORKER ISSUES
Penticton & Area Women’s Centre (PAWC) has embarked on a new project in hope to help farmers, communities and seasonal workers get together and work on resolving on-going problems linked to seasonal farm work. For those unfamiliar with PAWC work, they are a non-profit Society committed to achieving social and cultural equality in the South Okanagan Similkameen through the alleviation of poverty, violence and discrimination. PAWC assists both women and men through client and community based programs making sure that everyone has access to resources they need. These include Poverty Law and Disability Advocacy, support and referral services as well as education and raising public awareness on many issues that affect us all. One of those burning issues is a discord around seasonal farm work. We read many articles in regional newspapers each year related to transient farm workers. It proves that communities are well aware of the problems and a need for a more structured and permanent solution which would work for all. From all the work and research previously done, we found a strong inter-dependency between communities, farmers and seasonal workers. The Project FROM DISCORD TO ACTION is aimed to facilitating a one-day Action Planning Forum where the communities, farmers and seasonal workers come together and create a feasible plan that will have a positive economic impact on farmers as well as bring a positive change to each community in the area. PAWC has added Lilly Zekanovic as the Project Co-ordinator and all the questions and suggestions related to seasonal farm work issues should be addressed to her. The first stage of the Project is a Survey among the farmers, seasonal workers and various community members throughout South Okanagan Similkameen in preparation of Action Planning Forum which will be held in late November. The project From Discord To Action has been funded in part by Vancouver Foundation and BC Gaming and our many community partners. For more information or to become a partner in this project, contact Lilly Zekanovic, Project Coordinator ‘From Discord To Action’ Penticton & Area Women’s Centre. Telephone: 250.493.6822 ext. 106 or toll free: 1-800-493-6822  or you can contact her via e-mail at: farmwork.pawc@gmail.com.