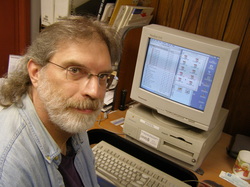 Born in Edmonton, Alberta and raised in Kelowna, British Columbia, George Elliott knew early on what career path he wanted to follow. "I was probably in Grade 6 or 7 and remember listening to the radio. I wanted to be that voice in the radio." Following graduation in 1978 in the first-ever Grad Class at KLO Secondary School in Kelowna Elliott didn't have long to wait to reach his goal. "My mom knew someone, who knew the Manager at a local radio station and set up a meeting for me." The 'guy' turned out to be Nick Frost, then Manager of CHIM-FM Kelowna. Elliott was hired part-time as a Tape Operator in October 1978 working four hours a week. It eventually led to more hours and a full-time on-air job at CKOV Kelowna, located across the hall from CHIM-FM. Elliott moved to Penticton, BC to work summer relief at CKOR-FM and CKOK in July of 1981. He ended up working full-time at CKOK (plus a short stint at CIGV-FM Penticton) until a call for middle management work out of town pulled him away in October 1986. He assumed the Assistant Manager position at CKRP (later CIOR) Princeton. He held that position until the station closed it's local facilities in April 1999. "That job prepared me for just about anything," Elliott says. "I did the morning show, covered local meetings for news, sold advertising, wrote the ad copy and produced the ads along with various other daily duties related to the business." After a year unemployed, Elliott was approached by Sharon Johnson, one of the partners operating the Similkameen News Leader. After a short meeting with her and Dawn Johnson, the other News Leader business partner, Elliott was hired full-time as Advertising Sales Manager. That was in July 2000. "I had never used a computer before, so that was going to be a hurdle from the start, but I sold some advertising my first day on the job and they decided I could figure out the computer later." Elliott bought the News Leader from the Johnsons in February 2004 and continues to operate it with his wife Brenda. Dawn Johnson, Elliott's former boss and good friend, works part-time as a reporter for her former employee. "It's a nice arrangement," Elliott says. "I've known Dawn as long as I've lived here. We always sat together at the media table of various meetings we attended when I was reporting news for the radio station. We both believe in the importance of keeping our small-town paper focused on the local happenings in our small town, which continues to be our focus."

You can contact George by sending an e-mail to: george@thenewsleader.ca 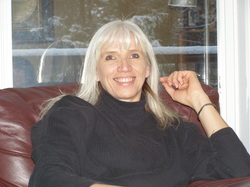 by Brenda Engel
I was born in Yorkton, Saskatchewan in 19 something and grew up on a farm. I’m a Prairie Girl. I had no idea what I wanted to do with my life when I was in school. When I was 19 I had an opportunity to replace my cousin at the Contact Lens Technicians office in Yorkton, Saskatchewan. That started me off on a 30 year career. The only way to get licensed for fitting glasses and contact lenses at that time was to take a correspondence course out of Ontario. At 2 years a piece it took 4 years to complete and I was so proud to receive very high marks. I loved fitting glasses and I was really good at it too. Each person was different, each face is different, and everyone’s need was different. For the ladies it was a cosmetic challenge. It was fun!  I just had a knack for it.  I moved to Vancouver, BC in 1987 and ended up there until 1994 at which time I moved to Princeton. I was so ready to get out of the city; it took me 6 months to stop speeding. Even though there was no one else on the highway I still had the urge to speed. Go figure. Being in the heavy traffic of Vancouver turns people into get there at any cost people. Even though there was no one else anywhere in sight, and I had nowhere to be, I still had the urge to get there faster, since there was no one in sight to impede my trip. Nuts!! George and I got married at the Similkameen Sizzle in Keremeos in 2004. It was the ONLY year it got rained out. The weather was AWFUL!! We had to buy warm jackets. Normally its 35 degrees out.  Apparently its good luck to get stormed on, on your wedding day. Still waiting……George isn’t laughing as he reads this. Develop a sense of humour George. I was bookkeeping at this location downtown, and when he bought the paper he moved it here with me. I’ve been learning about the newspaper business ever since, sometimes against my will. I’ve had to develop a thicker skin, but it’s not nearly thick enough, yet. It may never be. I’m usually the smiling voice that answers the phone, it’s my responsibility to do the classified ads and I’m actually starting to enjoy matching a customers needs to the right form of ad, be it a classified ad or a display ad. I’ve just recently started doing the crossword puzzle based on the previous weeks news.


You can contact Brenda by sending an e-mail to: brenda@thenewsleader.ca

Bengel Publishing Inc. was incorporated on December 23, 2003 by W. George Elliott to be the company to purchase the Similkameen News Leader. Elliott's company took possession of the weekly newspaper on February 1, 2004. The word 'BENGEL' has an interesting story behind it as explained by Elliott himself: "I wanted a name that was easy to say, but had some hidden significance to me. I kicked around a lot of ideas but kept coming back to the concept of naming my company after my wife Brenda or using a combination of letters from her name as well as from my name. Then one day it just hit me - the first initial from her first name, Brenda, added to her last name, Engel, gave me the word BENGEL. The white tiger in the corporate logo is a play on the work BENGAL." The word BENGEL also carries another hidden message in it: "Brenda Engel 'N' George Elliott Limited" which was the second choice of names Elliott was going to register if his first choice, Bengel Publishing Inc., was rejected.

The Similkameen News Leader publishes and distributes 1,000 copies weekly throughout the Similkameen Valley. In addition to mail out subscribers in Princeton, Hedley and Keremeos, we have newsstand locations at all of these communities. In Princeton the Similkameen News Leader can be purchased for a dollar per copy at Petro-Can, Cooper's Foods, Shoppers Drug Mart, The Hut, Sandman Inn, Husky, Chevron and at the News Leader office. In Hedley the News Leader is available at the Country Store and in Keremeos at Hilltop Esso, Valu-Plus Foods, Pharmasave and Fas Gas. Copies are also mailed to a number of paid subscribers who live outside of the Similkameen Valley with the majority of them going to other parts of British Columbia.