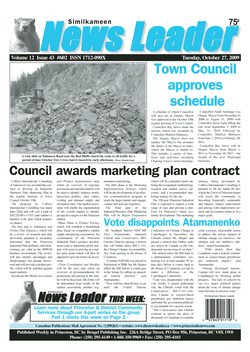 COMMITTEE FINALIZES MISSION STATEMENT
The Sustainable Similkameen Project Committee held two panel meetings over the weekend in Keremeos.
The first was a short evening session October 23rd where members representing various segments of the population of the Similkameen Valley attempted to fine tune their original Mission Statement. The day long session on October 24th brought the committee together to finalize the Mission Statement and define the Mission Objectives. Dr. Laurence A. G. Moss and Dr. Romella Glorioso facilitate the project, funded by Similkameen Valley Planning Society. The Mission Statement is: “To establish a socio-cultural, economic and environmental sustainability strategy for the Similkameen Valley that will maintain and enhance the quality of our rural and small town lifestyle.” The Mission Objectives are: 1) To celebrate the socio-cultural and biophysical diversity of our Similkameen Valley. 2) To protect our Similkameen Valley’s water, land and air quality and biodiversity. 3) To promote a diverse economy with multiple opportunities. 4) To maintain a physically, culturally and spiritually healthy Similkameen Valley. 5) To propose a means to implement, monitor and evaluate the strategy. 6) To increase the participation of Similkameen Valley residents in achieving the mission. Once the Mission Statement and Mission Objectives were finally agreed upon by all members as being complete the rest of the session was used to further define Key Decision Factors that could have an impact on the Mission Statement and what socio-cultural, economic, political, technological and environmental impacts each KDF could face. The resulting list was grouped together in common clusters to be analyzed by both Moss and Glorioso. “The process appears to be long and involved,” says Similkameen News Leader Owner/Publisher George Elliott who sits on the Committee. “But by the time we took a break for lunch we had actually covered a lot of ground and made some key decisions.” What does the group plan to achieve? “I think we all want to protect those things we value and it appears that regardless of whether you live in Coalmont, Princeton, Hedley, Keremeos or Cawston, there’s a lot of things we have in common with each other and we basically want to ensure those things are still intact many years from now,” Elliott says. The final report from the Sustainable Similkameen Project will not be published until 2010 as the committee will continue to meet monthly to further define goals with hopes of all governing bodies in the Similkameen Valley adopting the Mission Statement and Objectives.

COUNCIL AWARDS MARKETING PLAN CONTRACT
Colliers International Consulting of Vancouver was awarded the contract to develop an Industrial/Business Park Marketing Plan at the regular meeting of Town Council October 19th. The proposal by Colliers International Consulting was dated June 22nd and will cost a total of $30,725.00 (+ GST) and outlines a detailed work plan which features six phases. The first step is Validation and Product Due Diligence, which will be a review of research and data previously prepared to accurately determine that the Princeton Industrial Park attributes, and shortcomings are valid in the 2009/10 business environment. The review will also identify advantages and disadvantages not already discovered and will provide a product profile, which will be matched against target markets. Second are the Market Assessment and Product Segmentation steps where an overview of regional, provincial and national markets will be used to identify industry trends, buyer/user profiles, sales values, existing and planned supply and absorption rates. The market assessment will enable the segmentation of the overall market to identify prospective targets for the Princeton market. Phase Three is Product Pricing, which will establish a benchmark price based on competitive market supply and pricing expectations. An examination of the Princeton Industrial Park’s product development costs to determine profit margins will assist in arriving at a market price point which will then be adjusted to provide return on investment. Client Consultation and Briefing will be the next step where an overview of recommendations for positioning and pricing in the market will be discussed. All of this will be determined from results of the market assessment, product segmentation and pricing. The fifth phase is the Marketing Implementation Strategy, which will be the development of an effective
communication program to reach the target market and engage, compel and activate responses. The final part of the Industrial/Business Park Marketing Plan will be Report Preparation which will be a detailed report outlining the assignment methodology, research and market survey outcomes, and a recommended marketing strategy for the site. The 120-acre Princeton Industrial Park is expected to support a wide range of uses and provide a platform for Princeton’s future economic development. The marketing strategy being developed by Colliers International Consulting is planned to fill the initial 20 lots, which the Town of Princeton hopes will assist the community in becoming financially sustainable and balance market inducements and pricing with employment creation and investment return as two major goals. 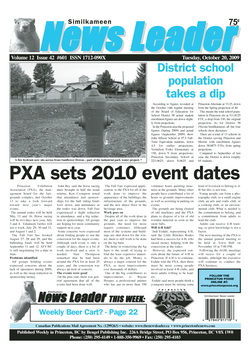 DISTRICT SCHOOL POPULATION TAKES A DIP
According to figures revealed at the October 14th regular meeting of the Board of Education for School District 58 actual student enrollment figures are down slightly from projections. In the Princeton area the projected figures (Spring 2009) and actual figures (September 2009) show John Allison School at 97.5 Full- Time Equivalent students, down 4.5 for earlier projections; Vermilion Forks Elementary at 158, down 9 from projections; Princeton Secondary School at 223.0625, down 8.0625 and Princeton Alternate at 33.25, down from the Spring projection of 40. This means the total school population in Princeton sits at 511.8125 FTE, a drop from 530, the original projection. As for District 58 (Nicola-Similkameen) all but four schools show decreases. There are a total of 13 schools in the District serving Princeton and Merritt with enrollment figures down 38.6875 FTEs from spring projections. Compared to September of last year, the District is down roughly 65 students.

SCHOOL BOARD EXAMINES FIELD TRIPS
A total of nine field trips for Princeton students were announced at the October 14th regular meeting of the Board of Education for School District 58 (Nicola- Similkameen). While most of the trips have already taken place in the September and October schedule, remaining trips include the Princeton Secondary School Leadership Class attending the BC Student Leadership Conference October 22nd in Kelowna and PSS Grade 12 students going to Merritt Secondary School November 12th for post-secondary institution presentations. The biggest field trip planned to date, which was approved at the October 14th School Board meeting, will be a Senior Girls Basketball team tour and Tournament in San Diego, California at the end of December. One field trip, planned in May of next year for Merritt Secondary School students to either Peru or Costa Rica for an ‘international development experience’ was denied. Reasons were many but focused primarily on the amount of school days students would miss and the choice of destinations for a French class to visit. 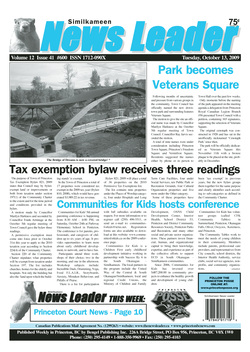 PARK BECOMES VETERANS SQUARE
Following months of uncertainty and pressure from various groups in the community, Town Council has
officially named the new downtown park and surrounding features Veterans Square. The motion to give the site an official name was made by Councillor Marilyn Harkness at the October 5th regular meeting of Town Council. Councillor Ray Jarvis seconded the motion. A total of nine names were under consideration including Princeton Town Square, Princeton’s Freedom Square and Vermilion Square. Residents suggested the names either by phone or in person to Town Hall over the past few weeks. Only moments before the naming of the park appeared on the meeting agenda a delegation from Princeton Royal Canadian Legion Branch #56 presented Town Council with a petition, containing 165 signatures, supporting the selection of Veterans Square. The original cenotaph was constructed in 1926 and has sat in the unofficially nicknamed ‘Cenotaph Park’ since then. The park will be officially dedicated as Veterans Square this November 11th with a bronze plaque to be placed at the site, probably in December.

CMMC POURS FIRST CONCRETE
Copper Mountain Mining Corporation (TSX: CUM) (the “Company” or “Copper Mountain”) announced October 8th that the Company has commenced construction on the mill foundations at the Copper Mountain Project site. The Company’s contractor Gisborne Industrial Construction Ltd has completed their mobilization and completed the first pour of concrete for the mill foundation. Concrete will continue to be poured through to mid December 2009, to complete the building foundations in preparation for the erection of the building steel in the spring of 2010. John O’Rourke, Chief Executive Officer of the Company stated: “We are extremely pleased with how quickly Gisborne mobilized their support facilities and crews to be in construction following us receiving the go ahead from the BC Government. With this planned construction start the project is on target to meet our scheduled production goal of mid 2011.” 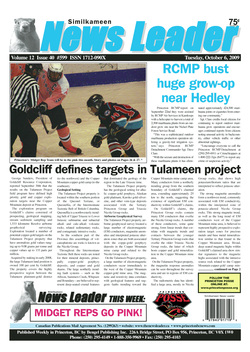 RCMP BUST HUGE GROW-OP NEAR HEDLEY
Princeton RCMP report on September 22nd they were assisted by RCMP Air Services in Kamloops with a helicopter to harvest a total of 2,500 marihuana plants from an outdoor grow site near the Nickel Plate Forest Service Road. “This was a sophisticated outdoor marihuana production operation utilizing a gravity-fed irrigation system,” says Princeton RCMP Detachment Commander Sgt. Dave Clare. “With the seizure and destruction of these marihuana plants it has eliminated approximately 424,500 marihuana joints or cigarettes from entering our community.” Sgt. Clare credits local citizens for continuing to report outdoor marihuana grow operations and encourages continued reports from citizens noting unusual activity in backcountry, either vehicle traffic or other abnormal sightings. “I encourage everyone to call the Princeton RCMP Detachment at (250) 295-6911 or CrimeStoppers at 1-800-222-Tips (8477) to report any crime or suspicious activity.”

TOURIST LEVELS STAYED HIGH
This summer’s statistics showed no real decline in tourists at the Princeton Tourist Information Centre. Centre Manager Lori Thomas told the News Leader last week that the numbers for 2009 compared favourably with the numbers from 2008. The numbers in August were on a par with August 2008, and slightly higher this July than last. The big surprise was the increase in June, with approximately 500
more visitors in June 2009 than in 2008. September was shaping up to be the equivalent to 2008. Excellent September weather helped. British Columbians formed the majority of visitors by far, with
Europeans second in numbers. Alberta and other areas of Canada were the third greatest group of visitors. American visitors did not amount to high numbers at all, with slightly over 100 per month. Lori Thomas noted a slightly higher number of inquiries as to camping facilities this year. The greatest number of inquiries were related to accommodation, adventure recreation, attractions and parks. Inquiries about the Trans-Canada Trail/KVR were less than 100 per month. There were a total of 26 inquiries from people interested in investing in or moving to the Princeton area.