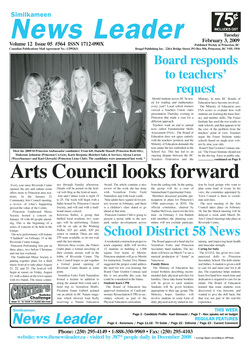 SCHOOL DISTRICT 58 NEWS
A residential construction project to teach carpentry skills will involve 12 students in building a 1,500
square foot home in Merritt. Princeton students will go to Merritt for instruction. Trustee Troy Hunter suggested the project could address the need for low cost housing, but Board Chair Gordon Comeau said
this is not possible this year, but could be considered in the future.
Students learn CPR - The Board of Education has approved instruction of Cardi-pulmonary Resuscitation (CPR) in secondary schools as part of the
Physical Education curriculum. The Board approved a band trip for Vermilion Forks and Princeton Secondary band students. The students will leave on March 7 to see a musical production of “Annie” in Vancouver.
Family fitness  - The Ministry of Education has issued booklets describing recommended daily physical activities for families. These take-home booklets
will be given to each student. Students will be given booklets appropriate to their age group. The Ministry hopes families will involve students in some form of
daily physical activity aimed at sustaining and improving heart health and muscular strength.
Caring for baby - The I.O.D.E. has given two computerized dolls to Princeton Secondary School. The dolls mimic real babies. Astudent is given a doll to care for and must care for it all day. The experience helps students learn first hand how much time and dedication is required to care for an infant. The Board of Education learned that some students soon discovered it was tiresome, and wanted to give the doll back, but that was not part of the real-life experience. 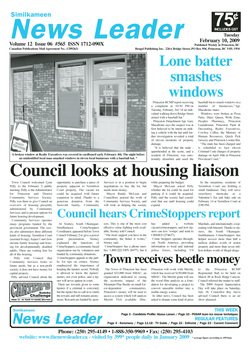 LONE BATTER SMASHES WINDOWS
Princeton RCMP report receiving a complaint at 10:30 PM on Tuesday, February 3rd “of an individual walking down Bridge Street armed with a baseball bat.” Princeton Detachment Sgt. Gary Macahonic says the suspect was at first believed to be intent on striking a vehicle with the bat until further investigation revealed a total of eleven incidents of property damage. “It is believed that the male - apprehended at the scene, and a resident of Princeton, was emotionally disturbed and used the baseball bat to smash windows in a number of businesses,” Sgt. Macahonic states. Windows were broken at Pizza Party, Dairy Queen, Work Zone, Peoples Pharmacy, Princeton Laundromat, Princeton Paint &
Decorating, Realty Executives, Cowboy Coffee, the Ministry of Human Resources, Quick Pick Grocery and Princeton Loonie Bin. “The male has been charged and
is scheduled to face eleven Criminal Code charges of property damage on April 16th in Princeton Provincial Court.” 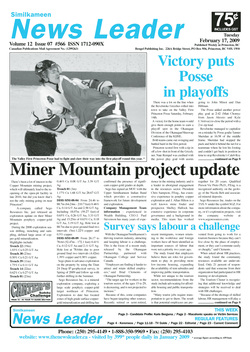 RCMP SEEK INFORMATION ON ROBBERY
Princeton RCMP report responding to a report of a robbery at Similkameen Vending at 294 Bridge Street. The call was recorded at 6:25 PM on Wednesday,
February 11th. Police say a lone male entered the store and “made a demand upon the proprietor.” Sgt. Gary Macahonic of Princeton RCMP Detachment says, “The culprit wore a disguise and no weapon was seen.”
Police request anyone with information that can lead to the identity of the robber or furthers the investigation
is asked to contact the local detachment at (250) 295-6911 or CrimeStoppers. You never have to reveal your identity when reporting a crime or tips related to a crime to CrimeStoppers and cash rewards are always being offered. The CrimeStoppers tip line is 1-800-
222-TIPS (8477). No other details regarding the robbery at Similkameen Vending have been released as police continue their investigation. 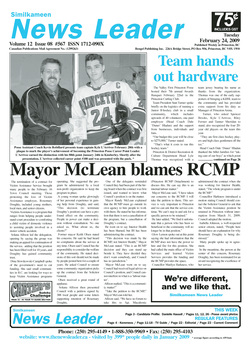 MAYOR McLEAN BLAMES RCMP
The termination of a contract for Victim Assistance Service brought many people to the February 16 Town Council meeting. Those protesting the loss of Victim
Assistance employee, Rosemary Doughty, included young mothers, local men, and senior citizens. Victims Assistance is a program that ranges from helping people understand court procedure to comforting a child victim of domestic violence to assisting people involved in a motor vehicle accident. Solana Allison led the delegation, opening by saying the group was making an appeal for continuation of the service, adding that the position has been filled well for 10 years, and Doughty has gained community trust.
Dina Slowikowski-Campbell spoke of the government’s need to cut funding. She said small communities in B.C. are looking for ways to keep Victim Assistance programs operating. She suggested the program
be administered by a local non-profit organization to keep the program in place. A young woman spoke glowingly of her personal experience in gaining help from Doughty, and said, “This decision (to terminate
Doughty’s position) can have a profound effect on the community. People in power can make a decision without consultation. No one asked us. What about us, the clients?” Former mayor Keith Olsen stated his concerns. He said he had heard no complaints about the service at any time. Olsen said Council has the responsibility to consider the welfare of the community. He stated decisions of this sort should not be made by people posted here for a couple of
years. He asked Council to ensure some community organization picks up the contract from the Solicitor General. Olsen received a great round of applause. Solana Allison then presented Council with a petition signed by 388 local people and some letters supporting retention of Rosemary Doughty. One of the delegates reminded Council they had been part of the hiring board when the contract was first
issued, and wanted to know what Council’s position is on the matter. Mayor Randy McLean explained
that the RCMP must go outside its own agency to hire people to work with them. He stated he has information that there is not a cancellation of the program, but a cancellation of Doughty’s contract. He went on to say Interior Health has been blamed, but IH has been administering the contract. “This decision was made by the RCMP, not Interior Health,” Mayor McLean stated. “This is an RCMP decision and they can stand up beside it. They have decided they don’t want somebody, and Council has no jurisdiction.” Mayor McLean went on to say Council had received legal advice on Council’s position, and Council cannot interfere in what is a ‘labour matter’. Allison replied, “This is a community matter!” “Take the petition to the RCMP,” Mayor McLean told her. Allison said, “We have no forum to take this to Sgt. Macahonic (Princeton RCMP Detachment) to discuss this. He can say this is an internal labour matter.” Mayor McLean said, “I have taken our concerns to the RCMP. I will take the petition to them. This service is very important to Princeton and we can ask that the service continue. We can’t step in and ask for a specific person to be retained.” He later added, “We find it unfortunate that a person who has been so beneficial to the community will no longer be in that position.” Glow Lemon spoke out at this point saying she had information that the RCMP does not have the power to hire and fire for this position. She had called the main office of Victim Services and learned Victim Services provides the funding and the RCMP provides the space. Councillor Marilyn Harkness, who administered the contract when she was working for Interior Health, stated, “The whole program is under the RCMP.” Councillor Harkness introduced a motion stating Council should contact the Solicitor General to ask that the Victim Assistance position be retained in Princeton without interruption from March 31, 2009. Council adopted the motion. Isabella Johnson, a well-respected senior citizen, stated, “People here should have an explanation for why Rosemary Doughty is being dismissed.” Many people spoke up in agreement. In the meantime, the person at the center of this concern, Rosemary Doughty, has been nominated for an
award recognizing the excellence of her service.