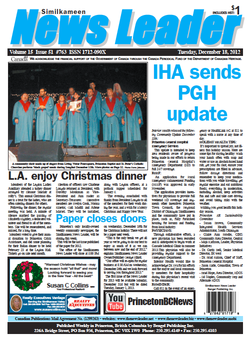 RCMP WARN OF SCAM
Princeton RCMP would like to advise the public of a telephone scam that has come to the attention of the police. This involves an unknown individual posing as a family member or a representative of the family member. The caller requests that you send money to assist the family member and details are provided on how to transfer the money. Once the money is transferred, the person does not hear from the caller again and when they finally speak to the family member, it is realized that the call was not legitimate. RCMP would like to caution the public of such phone scams and if you do receive a suspicious phone call of this nature to contact Phone Busters at 1-888-495-8501.

WHY CHRISTMAS TREES?
The Christmas tradition of bringing an evergreen tree into the house goes back to northern Europe perhaps 300 years ago, but may have originated with a pagan custom dating even further back. The first Christmas trees were decorated with edibles - apples, nuts and dates.  Some families hung sugar cookies on the tree. In America, popcorn and/or cranberry garlands were strung on the tree. Around 200 years ago, some families put candles on the tree. Often, the tree was set in the middle of the best room in the house, and the family danced around it singing Christmas songs such as ‘O Christmas Tree’. When Christmas trees became popular among Europe’s nobility, the decorations became much more elaborate. Confections were hung from the tree, and often small decorated boxes were hung and used as gifts for important visitors.

PAPER OFFICE CLOSES FOR HOLIDAY
Princeton’s only locally-owned weekly community newspaper, the Similkameen News Leader, will be closing this week. This will be the last issue published of the paper for 2012. The office of the Similkameen News Leader will close at 5:00 PM on Wednesday, December 19th for the Christmas holiday. There will not be a paper next week. “This is the only break we get all year so we’re going to do our best to enjoy as much of it as we can between now and the end of 2012,” explains Similkameen News Leader Owner/Publisher George Elliott. “Our office will re-open for regular business at 8:30 AM on Wednesday, December 26th and we look forward to serving you throughout 2013.” The first issue of the News Leader for 2013 will be available Monday, December 31st but will be dated Tuesday, January 1, 2013. 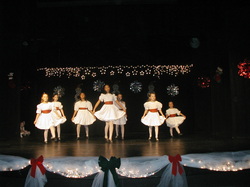 Winner Walks Away With Paint!

COUNCIL AWARDS ANALYSIS CONTRACT
The contract for structural analysis of the Princeton Courthouse building was awarded at the December 3rd regular meeting of Town Council. In a motion made by Councillor Jason Earle, and seconded by Councillor Doug Pateman, David Nairne and Associates of North Vancouver will conduct a Structural Assessment of the building at 151 Vermilion Avenue valued at $7,728.00. A total of seven responses were received following a Request for Proposals with David Nairne & Associates being the lowest one received. The second lowest amounted was $9,366.00 and the highest came in at $49,600.00. An assessment of the mechanical, electrical and environmental systems was completed earlier this year. The second step is the structural assessment. “If the results are favourable, the next step will be an architectural engagement to determine the suitability of the building for the purpose of a Town Hall,” Interim CAO Helen Koning stated in her report to Council. The structural analysis will start “as quickly as we can sign a contract with them,” Koning added. Expect to hear more about this project well into 2013 as Princeton Town Council continues with a step-by-step plan for the future of the building.

MUSIC MAN RETURNS!
Princeton welcomed the return of Harold Crane, former band teacher at Princeton Secondary School.  He was guest of honour at the band concert held at Riverside Centre on December 3. The reason for honoring Crane begins with current band teacher, Myrna Coates, seeking a vibraphone for her band.  She went to a music supply store in Kelowna to ask if the shop owner knew of anyone who might want to sell a vibraphone. He did.  He immediately contacted Joyce Crane, Harold’s daughter, who had a vibraphone stored in her basement.  Her father had bought it for her many years ago when she was in a band with him. Joyce hesitated about selling it, but when she found out it was for Princeton, and told her father about it, he told her to make up her mind.  The result was the vibraphone was donated to Princeton’s band. At the concert, 96 year old Harold Crane led the band in O Canada to begin the concert. Calling Crane Princeton’s ’Music Man’, Bob Cormack, who had been Principal of Princeton Secondary during the years when Crane taught music, gave a speech outlining Crane’s success as a band teacher.  Crane began teaching in 1961 and by 1965 led the Princeton band to a championship at a music festival in the Lower Mainland. The mixed school and community bands completed the evening with a wide variety of music, some simple for the beginners and some complex involving the entire band, such as the rollicking finish with ‘Rock Around the Clock’.

Local Design Gets Our Attention! 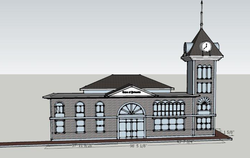 Drawing: Steve Brodie
Princeton's Steve Brodie has ideas. The last one he shared with us at the Similkameen News Leader was for the zigzag project. Although Brodie's design was not used, it had some creative and practical applications and design features we really liked. This week Brodie shares with us his conceptual vision of what can take place at the old court house building on Vermilion Avenue. We like it because it's designed by a local. What do you think? 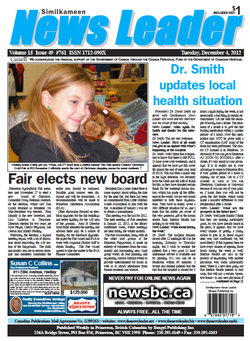 VANDALS COST PRINCETON POSSE $$$
by W. George Elliott Owner/Publisher
Similkameen News Leader
Princeton’s Junior B Hockey Club, the Posse, suffered a lost over the weekend. No, they didn’t lose a game and they didn’t lose a member of their team. The Princeton Posse lost an opportunity. The past five seasons the Princeton Posse has been part of a network of teams in the KIJHL and other sports teams in Western Canada that ‘webcast’ their games over the internet. The games are part of a pay-per-view program that makes money for both the league and the team. Viewers spend an average of $7.00 to view the game. A portion of that fee
goes to the league, which is then distributed to teams at the end of the season. The Princeton Posse webcasts have been the second most viewed in the league for the past two seasons. On average there can be anywhere from 25 to 100 people watching the live webcasts at home anywhere in North America. You do the math. That’s a few dollars. Multiply that by 25 home games in the regular season and tack onto that playoff games and additional revenue from viewing archived games and you get the picture that this is not a few bucks we’re talking about. Some time after the November 16th game and November 30th the Princeton Posse webcast equipment was damaged. The damage was serious enough to prevent the team from putting last Friday night’s game online, which lost the team (and KIJHL) some revenue. The Posse pay a per game fee to webcast each game and the league fines teams a hefty amount for not providing a webcast. The Posse could be fined for all future games not provided online. Fortunately a fundraising campaign started before last Friday night’s game ended and generous donations have been received. But why did this happen? I have my suspicions of what went on in the broadcast booth at Princeton Arena between Posse home games, but I have no proof, and it is not my style to point fingers without something to back me up. What I do know is that there are issues related to safety and security at Princeton Arena, which affect all the users of the facility. But what it really comes down to is sharing. We all need to share the space and we need to respect what other users are doing with their portion of that space. Wrecking webcast equipment is one thing. Those things can be replaced, but what happens if it gets more serious than that? If you have any information regarding the circumstances revolving around the vandalism of the Princeton Posse webcast gear, I’d like to hear it.

TOURIST STRATEGY WORTH BILLIONS
A 10 year tourism strategy has been developed by the Thompson Okanagan Tourist Association for the entire region, which will include a strategy for marketing the Similkameen Valley.  Tourism in the region is valued at an estimated $1.7 billion. During the past two years, the regional Tourist Association has worked to make business aware of the potential.  Meetings with stakeholders have been involved in developing the strategy through a coordinated approach to strengthening the tourist industry.  One of the key messages to every part of the region was to stop viewing competition as the business down the street, and start seeing it as the business in California or New Zealand. The goal of the Association is to put Thompson Okanagan region on the world stage as a ‘must visit’ destination. Similkameen Valley Planning Society has worked on marketing the entire valley. One of the key findings at the tourism meetings was a lack of identity for the Similkameen Valley.  A Similkmeen Valley website is being developed which will contain numerous images of the valley. One of the common goals of every part of the region is to create jobs and development that respects and sustains our environment and our culture.  For those who may doubt our culture, an overview of what goes on in the region is much like what goes on in the Similkameen Valley.  Ours is a region of forests, mountains, rivers, lakes, ranches, vineyards and wineries, sawmills, mines, orchards, ski hills and ski trails, and First Nations Reserves and businesses.  The sheer diversity of the region lends itself to a real marketing opportunity. The focus on summer tourism is still in place, but there seems to be a lack of tourists in the colder months, a problem the Association will address.  Snowmobile tours and ice fishing are winter time activities which may benefit from more and better marketing. 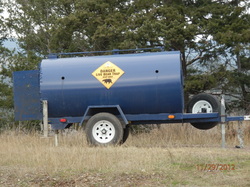 Photo: Brenda Engel
Residents on the Second Bench in Princeton have reported seeing a bear in their neighbourhood off and on over the past couple of weeks. There have also been bear sightings in various other residential locations in the area for several months. This bear trap spent a few days parked on the Second Bench as Conservation Officers took action resulting from the volume of sightings.