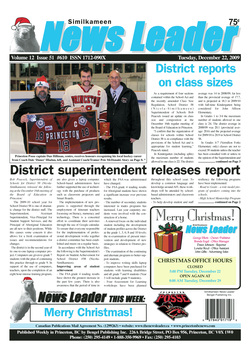 DISTRICT REPORTS ON CLASS SIZE
As a requirement of four sections contained within the School Act and the recently amended Class Size
Regulation, School District 58 ( N i c o l a - S i m i l k a m e e n ) Superintendent of Schools Bob Peacock issued an update on class size and composition at the December 16th regular meeting of the Board of Education in Princeton. “I confirm that the organization of classes for schools within School District 58 is in compliance with the provisions of the School Act and is appropriate for student learning,” Peacock stated. In Kindergarten (including splits) the maximum number of students allowed in one class is 22. The district average was 14 in 2008/09, far less than the provincial average of 17.7, and is projected at 18.3 in 2009/10 with full-time Kindergarten being considered for John Allison Elementary. In Grades 1 to 3/4 the maximum number of students allowed in one class is 24. The district average in 2008/09 was 20.1 (provincial average: 20.6) and the projected average for 2009/10 is 20.9 in School District 58. In Grades 4-7 (Vermilion Forks Elementary only) classes are not to exceed 30 students unless the teacher has been consulted with or unless in the opinion of the Superintendent and Principal the organization of the class is appropriate for student learning. In 2008/09 the school had an average class size of 23.6 (provincial average: 25.8) with the projected figure for 2009/10 set at 23.9. In Grades 7 to 12 there are a total of 36 classes with no special-needs students per class, 54 classes with 1 SNS, 74 classes with 2 SNS, an additional 74 classes with 3 SNS and 91 classes with 4 or more special needs students per class.

HILLMAN RECEIVES HONOUR, LEADS TEAM TO VICTORY
Saturday, December 19th was a big game for Princeton Posse as they played host to Grand Forks Border Bruins. Not only was the Posse tied for third place in the division going into the game, it would mark the final home game of 2009 as the team enters a Christmas break, and team captain Dan Hillman was honoured by the hockey organization for his incredible career as a Posse player. Hillman was dressed for his 150th regular season game in four seasons with the Posse and was sitting at a career total 117 points before the game started. Last year’s team captain Kyle L’Arrivee finished his Posse career with 110 points through 154 games in three seasons (regular and playoff games) for second overall and Jeremy Wagner collected 89 points over 146 regular and playoff games in three seasons (2005/06 to 2007/08) with the Posse to hold third place overall. Following a short presentation to Hillman by Posse Coach Dale ‘Duner’ Hladun and Assistant Coach/Trainer Peter McDonald where the team captain was presented with a plaque and his road jersey from last year in a shadow box frame, a hockey game broke out. The Posse scored first at 5:11 in the opening frame (Alex Whitfield from Brooks Christensen and Devon Grossler). By the time the first 20-minutes had passed Princeton had out-shot Grand Forks 14-1. The Posse continued their domination into the second period scoring their second goal at 18:46 (Lee Muir from Evan Stack and Spencer Kristensen).
Grand Forks turned a power play at 6:26 into a goal and had another waved off at 3:03 as the puck hit a Border Bruin in front of the Posse net and was disallowed as the player tried to redirect the puck with a forward motion of his arm. Princeton pulled netminder Mitch Sheridan with 2.1-seconds in the period and nearly scored again with players crowding the Grand Forks net and swinging at rebounds. The third period was owned by the Posse and ‘Mr. Posse’ Dan Hillman. Hillman scored at 18:16 with assists going to Spencer Kristensen and Evan Stack and added an assist to a goal scored by Spencer Kristensen at 15:46, and then Hillman added an unassisted (short handed) goal at 12:51. Final score: Princeton 5, Grand Forks 1. Shots on goal: Princeton 43, Grand Forks 11. Princeton’s next game is Saturday, January 2nd at home against Kamloops. 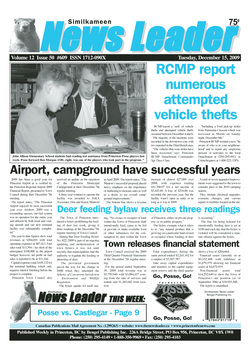 DEER FEEDING BYLAW RECEIVES THREE READINGS
The Town of Princeton introduced a bylaw prohibiting the feeding of deer last week, giving it three readings at the December 7th regular meeting of Town Council. Stating that Deer Feeding Bylaw No. 822, 2009 is part of an ongoing updating and modernization of town bylaws it was not until recently that municipalities had the authority to regulate the feeding or attracting of deer. The provincial government paved the way for the change in 2008 when they amended the Spheres of Concurrent Jurisdiction – Environment and Wildlife
Regulation. The bylaw speaks for itself stating, “No owner or occupier of land within the Town of Princeton shall intentionally feed, cause to be fed or provide or make available food or other substances for the consumption by deer within the Town of Princeton, either on private property or on public property.” The bylaw exempts what it refers to as “any natural product that is growing on a particular land owned or occupied where feeding of deer is occurring.” The fine for being ticketed for intentionally feeding deer is set at $100 and each day that the bylaw is violated will be considered a separate offense against the bylaw.

TOWN FORMS NEW FOREST CORPORATION
The Vermilion Forks Community Forest Corporation was formally formed at the December 7th regular
meeting of Town Council. The purpose of the formation was to provide legal consent for the Town of Princeton to enter into a joint venture with the Upper Similkameen Indian Band and Regional District Okanagan Similkameen for the purpose of holding a Community Forest Agreement/License. The joint venture is being incorporated to be a self-sustaining entity. The joint venture will hold a community forest license that will generate revenues through forestry operations. Revenues generated within the corporation will be used to cover operational costs with net profit being distributed to the three partners equally. 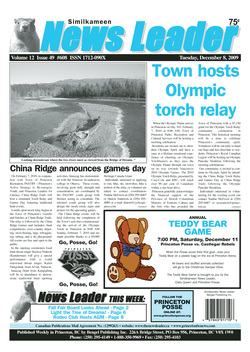 2010 FAIR BOARD LOOKS AHEAD
The entire slate of officers from 2009, with the addition of Char Smith, was elected at the annual general meeting of Princeton and District Fall Agricultural Fair Association held December 1. Keith Olsen returns as President, Lyn Melnechenko as Vice-President, Cheryl Ferguson is Treasurer and Dan Kastor is Secretary. Directors are Rose Flegel, Dawne Graves, Fran Murphy, Terry Inglis, Nicola Hodgson, Char Smith and Ruby Bey. John Bey, President of Princeton Exhibition Association (PXA), thanked the Fall Fair members for all they had done during the past year. “We had a great year,” Bey said. He encouraged the Fair Board to submit their “wish list” for things to be done by the PXA in 2010. Members came up with a couple of ideas on the spot. These will be written up for PXA consideration. Director Ruby Bey volunteered to be in charge of seeking sponsorships for the 2010 fair, which will last three days.
Sign promotes a lot
Director Terry Inglis has been preparing in advance for both the fair and Princeton’s 150th celebration. He brought a huge wooden sign, four feet by eight feet, to the meeting. The lettering on the sign is made of denim pine, giving the effect of bas relief. The sign advertises the dates of the fair (August 27, 28 & 29) as well as Princeton’s 150th anniversary. Members congratulated Inglis on his excellent work. He said he plans to make three more this winter.
Santa photos
The sign will be on display this Saturday at Princeton Plaza Mall, where the Fall Fair is hosting photos with Santa from 11:00 AM to 2:00 PM. Hot chocolate will be served.
Yard sale ahead
Director Fran Murphy received approval for another yard sale to be held in the spring. She collects and sells items on behalf of Junior Fair. The rest of the yard sale consists of renting spaces and tables to members of the community to sell their yard sale items. The last two Fall Fair yard sales were successful.
Scoring confusion
President Keith Olsen discussed how the fair was rated this year. Each year, the entire fair is judged by an experienced person appointed by the BC Fairs Association. He said the new scoring system created some confusion in his mind because there are differences in how scores are arrived at. He thought the fair judge had missed seeing some things, but overall, as near as he could tell, the fair rated better this year.
Christmas thank yous
A committee of three is working on sending thank you notes to everyone who helped with the 2009 fair in some way. These will be sent as Christmas greetings. The Fair Board will take a brief recess until January 26, 2010, when planning for the 2010 fair will begin in earnest. 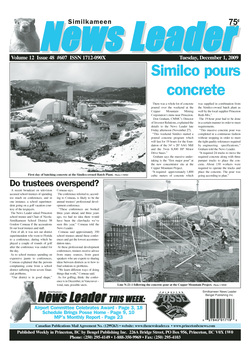 SIMILCO POURS CONCRETE
There was a whole lot of concrete poured over the weekend at the Copper Mountain Mining Corporation’s mine near Princeton. Don Graham, CMMC’s Director of Investor Relations, explained the details to the News Leader late Friday afternoon (November 27). “This weekend Similco started a poured concrete program which will last for 19 hours for the foundation of the 34’ x 20’ SAG Mill and the Twin 8,500 HP Motor Drive bases.” Graham says the massive undertaking is the “first major pour” at the new concentrator site at the Copper Mountain Project. “It required approximately 1,800 cubic meters of concrete which was supplied in combination from the Similco-owned batch plant as well by the local supplier Princeton Redi-Mix.” The 19-hour pour had to be done in a certain manner in order to meet requirements. “This massive concrete pour was completed in a continuous fashion without stopping in order to meet the tight quality tolerances required by engineering specifications,” Graham told the News Leader. “It required 24 trucks to move the required concrete along with three pumper trucks to place the concrete. About 130 workers were required to operate the trucks and place the concrete. The pour was going according to plan.”

DO TRUSTEES OVERSPEND?
A recent broadcast on television accused school trustees of spending too much on conferences, and in one instance, a school superintendent going on a golf vacation courtesy of the taxpayers. The News Leader asked Princeton school trustee and Chair of Nicola- Similkameen School District 58 Gordon Comeau if the accusations fit our local trustees and staff. First of all, it was not our district superintendent who went to Florida to a conference, during which he played a couple of rounds of golf after the conference was ended for the day. As to school trustees spending on expensive jaunts to conferences, Comeau explained that the persons complaining come from a school district suffering from severe financial problems. “Our district is in good shape,” Comeau says. The conference referred to, according to Comeau, is likely to be the annual trustees’ professional development conference. “These conferences are booked three years ahead, and three years ago, we had no idea there would have been the clawbacks we’ve seen this year,” Comeau told the News Leader. Comeau said approximately 350 school trustees attend these conferences and get the lowest accommodation rates. At these professional development conferences, trustees receive advice from many sources, from guest speakers who are experts to sharing ideas between districts as to how to find solutions to problems. “We learn different ways of doing things that work,” Comeau said. As for golfing, think: the conference is in December, in Vancouver – wind, rain, possible snow.