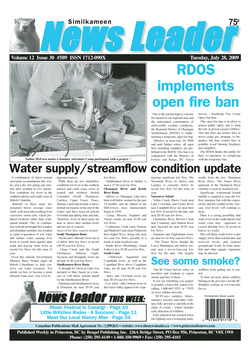 RDOS IMPLEMENTS OPEN FIRE BAN
Due to the current high to extreme fire hazard in our regional area and the anticipated continuation of unfavorable weather conditions, the Regional District of Okanagan Similkameen (RDOS) is implementing
a temporary open fire ban. Effective at noon July 24, 2009 and until further notice, all open fires including campfires are prohibited in the RDOS. This ban is in conjunction with the Ministry of Forests and Range, BC Forest Service - Kamloops Fire Centre Open Fire Ban. This open fire ban is in effect to protect public safety and to limit the risk of person-caused wildfires. This ban does not restrict fires in stoves using gas, propane, or briquettes, but does restrict fires in portable wood burning fireplaces and campfires. The RDOS thanks the public for their co-operation in complying with the temporary ban.

LIGHTNING SETS OFF SERIES OF FIRES
The Kamloops Fire Centre is feeling the effects of the series of thunderstorms that passed through the fire centre July 23rd. Gusty winds and most areas with little or no precipitation are accompanying the multiple hits of scattered lightning. Resources are being allocated according to priority, with interface fires being the highest priority. Approximately 70 spot fires, which are 10 meters by 10 meters in size, have been detected as a result of the lightning. The Kamloops Fire Centre expects this number to rise as the storm sweeps across the province. In anticipation of this lightning storm, fire officials have repositioned air and ground resources from quieter portions of the province to the more active areas such as the Thompson Okanagan area. As well, crews and individual resources from across Canada have begun arriving at the Nicola Fire Base in Merritt. Once they have received their safety briefings and equipment, they will join the ranks of the Kamloops fire suppression personnel on fires. As lightning becomes more common approaching the summer season, it’s crucial that crews are available to respond to naturally occurring wildfires. Person-caused wildfires divert critical resources away from managing these naturally occurring fires. The BC Forest Service asks that everyone be especially vigilant when enjoying outdoor activities this summer. As well, we wish to thank the public for their cooperation and continuing to report wildfires. Almost half of all fires in BC are reported by the public. If you see smoke or flames, please call 1-800-663-5555 or dial *5555 on most cellular networks. For further info, please call 1-888-3FOREST or visit the B.C. Wildfire Management program website at www.bcwildfire.ca. The News Leader also received reports of as many as ten new spot fires located around Princeton following the lightning storm last week, but were unable to confirm that number. “There’s no doubt there were some spot fires set as a result of the lightning,” says News Leader Owner/Publisher George Elliott. “At least one helicopter with a water bucket was in the area and spotter planes have been flying around for days.” 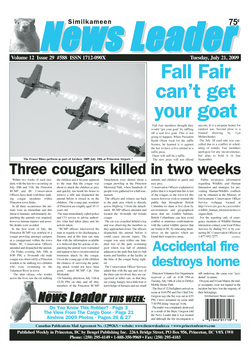 ACCIDENTAL FIRE DESTROYS HOME
Princeton Volunteer Fire Department received a call at 4:38 PM on Tuesday, July 14th of a fire in Deblyn Mobile Home Park. The first of 12 firefighters arrived on scene at 4:44 PM and Fire Chief Eric Gregson says the fire was out at 4:55 PM. Crews remained on scene until 7:30 PM doing ‘mop-up’ work. The trailer was completely destroyed as a result of the blaze. Gregson told the News Leader that it was insured and although the fire investigation is still underway, the cause was “accidental” in nature. Dwayne and Vivian Materi, the trailer occupants, were not injured in the incident but have lost the majority of their belongings.

ARTS COUNCIL BEGINS NEW YEAR
The annual general meeting of Princeton & District Community Arts Council saw a new Board of Directors elected to begin the coming year. Councillor Ray Jarvis, who has been Town Council’s liaison with them Arts Council, conducted the election. Del Hall is President, with Ed Staples as Vice-President. Joan Kelly is Secretary and Nick Mills is Treasurer. Directors are Joann Gabriel, Sue LePoidevin, Norma Kraetor and Derek Hodgson. A vote of thanks was given to Past President Rika Ruebsaat and Past Secretary Jon Bartlett for their hard work during their two years on the Board. Year-end reports were presented by most member groups, indicating another year of increased arts and cultural activities. The former Goldion Restaurant was made available by the Town for 12 art shows during the past year. The completion of the stage at Riverside Centre made performing arts so much easier, and a number of plays and a ballet were featured. The Traditional Music Society is hard at work on the festival for August 21, 22 and 23, the annual festival showing steady growth and increasing support from the community. Members decided to change the date of the annual general meeting, as everyone is so busy in summer. The next AGM will be held in March 2010. The newly elected President informed everyone there will be a “visioning” session in the fall to determine the direction the Arts Council will take in the future. A set of guidelines, called A Tool Kit for BC Arts Councils, will be used as a basis for changes. The next meeting of the Arts Council will be September 16. 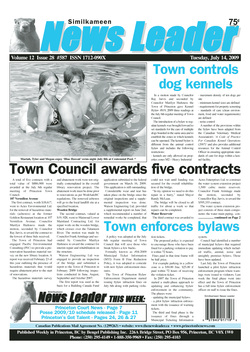 TOWN ENFORCES BYLAWS
A policy was adopted at the July 6th regular meeting of Town Council that will save those who break bylaws a few bucks. Formally known as #04-2009 Municipal Ticket Information (MTI) Form B Fine Reduction Policy, it was adopted to coincide with new bylaw enforcement measures. The Town of Princeton Bylaw Enforcement Department started issuing bylaw infraction fines on July 6th along with parking violation tickets. The proposed policy is expected to encourage those who have been fined for a parking violation to pay it within 72 hours. Fines paid in that time frame will be half price. For example parking in a yellow zone is a $50.00 fine. $25.00 if paid within 72 hours of receiving the violation ticket. In 2007 the Town of Princeton started a multi-phase approach to updating and enhancing bylaw enforcement in the community. The phases were: - updating the municipal bylaws - a pilot bylaw infraction enforcement with the issuance of warning tickets. The third and final phase is the issuance of fines through a Municipal Ticketing Information system. Council had identified a number of municipal bylaws that required immediate updating which included traffic, animal, noise and unsightly premises bylaws. Those have been updated. Last July the Town of Princeton launched a pilot bylaw infraction enforcement program where warnings were issued to violators. Last week the final phase went into effect and the Town of Princeton has a full time bylaw enforcement officer on staff to issue the fines.

TOWN CONTROLS DOG KENNELS
In a motion made by Councilor Ray Jarvis and seconded by Councilor Marilyn Harkness the Town of Princeton gave Kennel Bylaw #819, 2009 three readings at the July 6th regular meeting of Town Council. The introduction of a bylaw to regulate kennels was brought forward to set standards for the care of multiple dogs boarded in the same area and to establish the zones in which kennels can be operated. The kennel bylaw is different from the animal control bylaw and includes the following restrictions: - kennels are only allowed on properties zones M2 – Heavy Industrial - maximum density of ten dogs per site - minimum kennel sizes are defined - requirements for property screening - standards of care (clean environment, food and water requirements) are defined - noise control A number of the provisions within the bylaw have been adapted from the Canadian Veterinary Medical Association's ‘A Code of Practice For Canadian Kennel Operations (2007)’ and also provides additional resources for the Animal Control Officer in ensuring appropriate standards of care for dogs within a kennel facility. 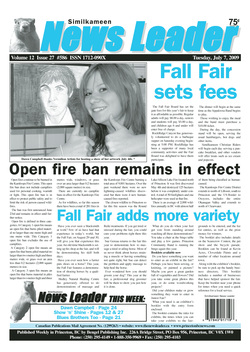 PRINCETON HOLDS LEAD IN CONTEST
Forty-four communities around B.C. have won prizes, ranging from Olympic and Paralympic tickets to athlete visits to prize packs through the Province’s GamesTown 2010 competition, Minister of State for the Olympics and ActNow BC Mary McNeil announced June 23rd. “B.C. communities are building their own legacy of active and healthy living as they compete for the title of GamesTown 2010 and the grand prize of $100,000,” said McNeil. “These prizes we’re awarding today will help each community engage its residents, give them a taste of what the 2010 Games will be like on a local level, and encourage people to go online, submit their stories and put their community at the front of the race for the title of GamesTown 2010.” GamesTown 2010 prize winners were announced last week during the first of four ActNow BC Free Skate events being offered at the Richmond Olympic Oval in the lead-up to the 2010 Winter Games. Winners include Penticton, New Westminster, Old Masset, Glen Vowell Band, Hazelton, Quesnel, Kamloops and Powell River, which have each won a visit by an Olympic or Paralympic athlete. Olympic swimmer Ryan Cochrane has already visited Houston, the March winner of an athlete visit. Thirteen communities have won tickets to the 2010 Winter Olympic Games and an additional three communities, including Princeton, have won tickets to the 2010 Winter Paralympic Games. “B.C. has set the goal of being the healthiest jurisdiction ever to host an Olympic and Paralympic Games,” said Healthy Living and Sport Minister Ida Chong. “From the stories, photos and videos that communities have posted to the GamesTown 2010 website, it’s obvious that British Columbians all over the province have already embraced the spirit of healthy living that this contest and the 2010 Winter Games represent.” In total, 77 communities have already entered the GamesTown 2010 competition, with Princeton, Powell River and Houston currently leading the way in the number of entries. Community entries will be judged on a variety of healthy living and environmental sustainability criteria, creativity and enthusiasm, the community’s participation in the World Healthy Living Challenge, and how active the community is in incorporating the Olympic and Paralympic theme in its current activities and plans for the year ahead. For more information, and to enter your community in the GamesTown 2010 contest, visit www.GamesTown2010.ca.