TOWN AWARDS EQUIPMENT CONTRACT
The Town of Princeton awarded a contract for the purchase of a Kubota Front Mount Tractor at the August 6th regular meeting of Town Council. "Town of Princeton Public Works department requires a tractor capable of both mowing grass in the summer and removing snow from sidewalks in the winter," explained Deputy Treasurer/Collector Shirley McMahon in her report to council. "Council has approved $32,500 for the purchase of this tractor as part of the 2013 budget; the additional amount can be funded through the small equipment budget." Currently the Town has a 2002 Kubota F2560 tractor in the fleet. The small tractor is a 2-wheel drive model and is equipped with a front mounted mower. "As equipped, this tractor's sole purpose is to mow grass." The replacement of the 2-wheel drive tractor with a 4-wheel drive model will allow the town to equip it with a cab, blade and broom, which will make it capable of being used in the winter months for snow removal. The contract was awarded to Gerard's Equipment of Oliver which had the lowest quote of the five received at $32,760.00 plus taxes, which will bring the final cost to $2,553.00 over budget.

CAMPS FILL ICE TIME AT ARENA
A total of sixteen skaters and three goalies participated in the joint Princeton Posse/Minor Hockey Camp last week at Princeton Arena. Posse Associate Coach Mark McNaughton says the three day camp was quite extensive. "The morning sessions were focused more on individual skills especially skating with the afternoon sessions focused on getting the players out of their typical comfort zones and introducing them to more advanced drills making them work in a more dynamic way on the ice." McNaughton says the camp was designed to make players "think and act in a more dynamic fashion" and that the ice sessions were to "provide the players with an edge going into their upcoming seasons as they now know that they are not limited to the basics as they move forward in their hockey pursuits." The Posse followed the Minor Hockey Camp with a Junior Prep Camp. McNaughton called it "a high tempo skating and skills camp that helped players shake off the last of their summer rust as they prepare for the up coming season."  He told the News Leader players were ³pushed to combine skills and increase their mental streams on the ice to give them some last minute preparation for their try out camps." The Posse Main Try Out Camp is this week which will be an intense and competitive event. "We have only invited a small number of players to attend and compete for a spot on our roster. There will be a large number of new faces as we try and move the program forward." 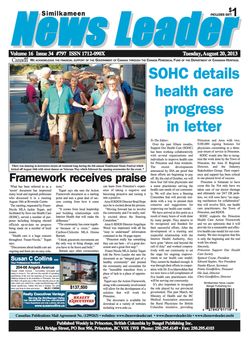 JUDGE OPTS FOR PROBATION
James Eisnor appeared in Provincial Court in Princeton on August 15 to plead guilty to charges of assault and mischief to property belonging to Weldon Scott Hassell.  Eisnor¹s lawyer told Judge G. Sinclair that Eisnor had been attending counseling to deal with anger issues. He asked for six months probation.  Judge Sinclair opted for nine months probation with several conditions, including no contact with Hassell  or Debra Lemottie, no firearms or other weapons, counseling as recommended by the probation officer, and to submit a DNA sample to be entered into the national data bank. In addition, Eisnor must pay $700 restitution to Hassell.

BREACH BRINGS BIG FINE
A 24 year old lower mainland resident, Colton Christopher Hudson, appeared in Provincial Court in Princeton on August 15 to plead guilty to a charge of breach of probation.  Hudson had been  convicted of possession of marijuana and had been given a conditional discharge.  One of the conditions was that he not consume alcohol. He was found lying on the street on Boucherie Road in Kelowna.  Police and Emergency Services were called to attend, and it was learned that Hudson had passed out on the sidewalk as a result of consuming alcohol.  Hudson was ordered to pay a $500 fine.

FAIR IS READY FOR YOU
The final meeting before the annual agricultural fair was held last week, and a brief review indicated everything is ready except the final preparations.  This week, workers will be at the grounds doing last minute set-up, displays and double checking.  Thursday, entries will be taken and Friday, more entries will be taken - 12 Noon to 7:00 PM.  Exhibits buildings will close at 7:00 PM and judging of exhibits will begin. Friday evening offers team roping, then the Little Britches Rodeo semi-finals begin on Saturday morning, and the exhibits buildings will open to the public.  Saturday and Sunday begin with a pancake breakfast. Bingo will be run daily. Saturday evening, there will be a special supper served. Then, at 6:00 PM, Dale Seaman and Highway 97 start the music and dance evening that runs to 10:00 PM. Admission to the fair is only $5 for adults and $2 for children age 6 - 12.  No admission is charged for the children¹s entertainment features, thanks to the generosity of local businesses. These sponsors are shown in the exhibitor¹s booklet. 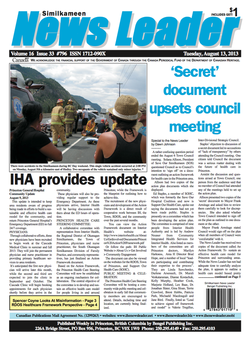 TOWN ISSUES FIRST DVP
The Town of Princeton will issue the first Development Variance Permit of the year as a result of a recommendation made by RDOS Planner Malcolm McNaughton. The matter was approved at the August 6th regular meeting of Town Council. According to McNaughton, in his report to Town Council, "The applicant has an existing manufactured home on the property. During the original placement of the structure a survey was requested but never provided." Eventually a survey was received, but not until after the home was placed on the property. "The survey provided shows that the structure is 1.7-metres from the property line on the south end and 1.8-metres from the property line on the north end." The side parcel setback required is 2-metres. McNaughton adds that although the encroachment into the setback varies from 0.2-metres to 0.3-metres, it does not appear to cause any problems with the use and enjoyment of the property or the neighbouring property. "It does not seem to impede the function or maintenance of the structure. Although the proposed reduced setback does not meet the bylaw it does not appear to defeat the intended purpose of the bylaw." McNaughton adds that had the applicant provided a survey plan prior to completing the installation of the home the problem would have been discovered and possibly rectified. Town of Princeton CAO Richard Zerr summed it up at the meeting with the statement, "It's basically an accidental thing," and Town Council approved the issuance of the Development Variance Permit for the property located on Angela Avenue.

TOWN COUNCIL ISSUES SECOND DVP
The Town of Princeton issued their second Development Variance Permit of the year following the August 6th regular meeting of Town Council. A Development Variance Permit application for a new home on Copperhead Road was received May 31st, 2013 and according to Town of Princeton CAO Richard Zerr the applicant hired a contractor to build a single family home and footings were poured. "Upon review the footings were poured in the wrong location and do not meet the side parcel lines setback," Zerr explained in his report to council. "Work has halted until this matter can be resolved." The location of the house for which the variances are requested could simply be remedied by removing and replacing the footings, Zerr says. "However, since these are simply footings and the foundation walls have not been yet poured; only a small variance to the interior parcel lines is needed to provide a cost effective, workable solution." Town Council approved the issuance of Development Variance Permit #DVP 02-13 which allows for the side parcel line setback be reduced from 2.5-metres to 2.0-metres and the interior side parcel line from 1.3-metres to 1.2-metres. 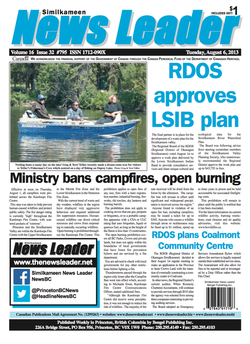 RDOS PLANS COALMONT COMMUNITY CENTRE
The RDOS (Regional District of Okanagan Similkameen)  decided at their August 1st regular meeting to make an application to the Province to lease Crown Land with the intention of eventually constructing a community centre in Coalmont.  In other news, the Regional District's current auditor, White Kennedy Chartered Accountants, will continue to provide services through 2015 after the agency was selected from among three companies interesting in providing auditing services.  The Board adopted an Emergency Services Amendment Bylaw which allows fire services to legally respond outside their established service areas. The Amendment will also allow for fires to be reported and or investigated by a Duty Officer rather than the Fire Chief.

RDOS CONSIDERS TRAIL ARRANGEMENT
From the August 1st regular meeting of the Regional District of Okanagan Similkameen: Regional Directors want more time to consider a tri-party arrangement to provide funding to maintain the Penticton Channel Trail. The trail is owned and operated by the Penticton Indian Band. With the three-party agreement, the Regional District would contribute $5,833 for the remainder of 2013 and $14,000 annually each of the following five years to assist with maintenance and enhancement of the trail. The Regional District, as part of its commitment to improving client and stakeholder experience, is working to develop the KVR Trail to link communities within the Okanagan and Similkameen valleys. The Penticton Channel Trail is part of this network. Since 2009, the Penticton Indian Band has solely funded the maintenance of the trail between the dam at the north end of the channel and the parking lot at the sound end.

Copyright 2013 Bengel Publishing Inc.
An outdoor concert featuring Canadian star of stage and screen Michael Burgess attracted over 700 to the field in front of a stage in Oliver, BC August 3, 2013. The event, heavily promoted in the Okanagan and Similkameen, saw a number of Princeton and area residents in attendance to hear the tenor sing songs from musicals he performed in as well as other favourites.

Feeding Time in the Similkameen! 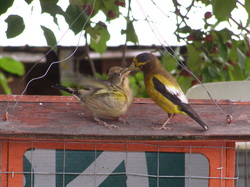 Copyright 2013 Bengel Publishing Inc.
With all the Spring chicks out and about it is not an unusual sight to see parents feeding young now that they are out of the nest. It's all part of the cycle that will see the young birds off on their own before too long. Here a young Evening Grosbeak (left) receives a serving of chewed up sunflower seeds from an adult male. This shot was snapped in the morning of August 3, 2013 in a backyard in South Princeton.