Female Boxer Can Use Your Help! 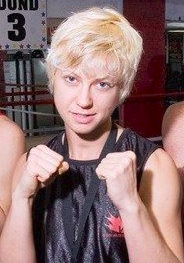 26-year old Tyme Hennenfent will be boxing in the National Championships in Cape Breton, Nova Scotia January 10, 2012. Formerly of Princeton and now living in Kamloops, BC with her two young daughters, the 5’ 7” stunner hopes to become a carded boxer by 2013 and compete in the 2016 Olympics.
The National Championships in Nova Scotia will be “the biggest fight of my career, so far,” says Hennenfent. “It will create opportunities for me to fight in the Pan Am Games and Worlds. This competition (the NC in Nova Scotia) is a massive part of my goal.” Hennenfent is looking for sponsorships from any business or individual who can provide funding to help cover some of the costs (plane fare, nine-day hotel accommodation and meals) associated with the Eastern Canada event.
Donations can be direct deposited to CIBC Account #7385633 (00460), can be sent to 369 Fortune Drive, Kamloops, BC V2B 2H9 or e-mailed to: tyme_h_06@hotmail.com. Hennenfent says any and all donations will be appreciated. 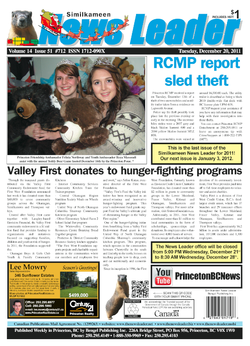 GROW-OP GOES BUST
On March 2011, RCMP received a tip about a possible marijuana grow operation. They began an investigation of a property that had a house, a shed and a barn. On March 31 police executed a search warrant and found 331 marijuana plants growing in the shed. A search of the barn revealed two rooms containing a further 216 and 245 plants, for a total of 790 plants. On December 15, Scott Desjarlais, a middle-aged Coquitlam resident, appeared in Provincial Court in Princeton to plead guilty to one of three charges against him. His defense counsel told the court Desjarlais had tried two crops. The first had failed and he was arrested when the second crop was discovered. He had been trying to make some extra money over and above the $6,000 to $8,000 he grosses from his Coquitlam flooring installation company. Instead, he lost a lot of money. Judge G. Sinclair sentenced Desjarlais to an 18 month conditional sentence with the first six months under house arrest, allowing him to go to work only. He is not permitted to have any illegal drugs in his possession and is not to consume alcohol. Desjarlais is prohibited from possessing any weapons for 10 years, and must give a DNA sample to be placed in the Canadian Registry.

REBELS HOST TOURNEY, ALUMNI GAME - by Adam Gullason
The Princeton Rebels hosted a number of teams - including Keremeos Sparks and the KVR Express - for a tournament on Wednesday and Thursday, December 14 and 15 at Princeton Secondary School. Both Girls and Boys teams were playing in this tournament. Princeton won both of the games on Wednesday and lost both games on Thursday. Team coaches indicated all of the games were close and both teams played well. Christmas break will see the return of former Rebel Girls Basketball team players for the second annual Alumni game. The game is set for December 22nd at 7:00 PM at PSS gym against the provincially ranked 2012 Rebel squad departing Boxing Day for an Arizona tournament.

Where Do The Bears Go? 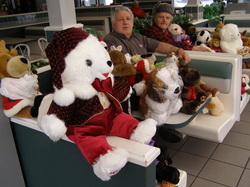 Copyright 2011 Bengel Publishing Inc.
Princeton Crisis Assistance Society President Alan Kovaltsenko, right, picks up Teddy Bears from Princeton Posse Club President John Babiak. The bears were tossed on the ice of Princeton Arena December 16th in the annual 'Teddy Bear Game' and are distributed to children in the area through Christmas Hampers. Some are given to RCMP Victim Services to present to children dealing with crisis and others go to senior residents at local long-term care facilities. 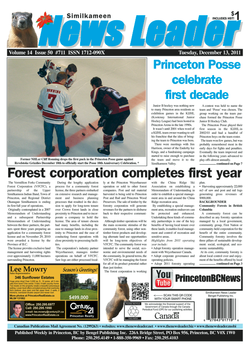 NEW BOARD SWEARS OATH
School District #58 Secretary Treasurer Kevin Black conducted the swearing in ceremony of the new Board of Education on December 7. Most of the School Trustees had served on the Board in years past. Leah Ward, Princeton area, was elected for the first time, along with David Laird and Tom Kroeker of Merritt area. Gordon Comeau was once again elected Chair with Richie Gage as Vice-Chair. The new Board got down to business immediately to consider a proposal for a child minding course for students at The Bridge, the alternate school in Princeton. Four of the students have infants and two are pregnant. The child minding addition would keep the young women in school. The proposal is partnered by Leaders for Literacy, with Princeton Child Care Services as consultants. The Board supported the proposal.

FOREST CORPORATION COMPLETES FIRST YEAR
The Vermillion Forks Community Forest Corporation (VFCFC), a partnership of the Upper Similkameen Indian Band, Town of Princeton, and Regional District
Okanagan Similkameen is ending its first full year of operations. Originally contemplated in a 2007 Memorandum of Understanding and a subsequent Partnership Memorandum of Understanding between the three partners, the partners spent three years preparing an application for a community forest license and on November 29, 2010 were awarded a license by the Province of B.C. The license provides exclusive land management and harvesting rights over approximately 11,000 hectares surrounding Princeton.
Highlights from 2011 operating year include:
• Adopt forestry operation management with Weyerhaeuser Canada.
• Adopt corporate governance and operating policies.
• Adopt 2011 forestry operating plan.
•  Harvesting approximately 22,000 m3 of saw and post and rail logs generating gross revenues of $900,000. 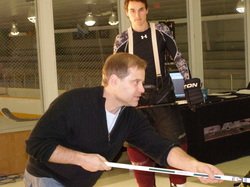 Copyright 2011 Bengel Publishing Inc.
Former NHLer Cliff Ronning came to Princeton last week to primarily be the Guest Speaker at the Posse 10th Anniversary Banquet December 10th at RockRidge Canyon. He ended up spending part of the week prior to that event in Princeton with his Base Hockey mobile analysis unit spending time with each member of the Posse to review shooting technique. For more information on the custom-built hockey stick company co-founded by Ronning visit www.basehockey.ca

Stop awhile along Highway 3 just west of Coral's Cabins and enjoy this Nativity Scene. The owners undoubtedly intend the viewer to turn their car off and get out of their vehicle: the nativity scene has a variety of music and the lights flash in time with whatever tune is playing. Watch for the 20-foot "Bouvettes" sign adorned with an oriental dragon:  that's where the nativity scene is. Filmed by: Arlene Arlow for Similkameen News Leader 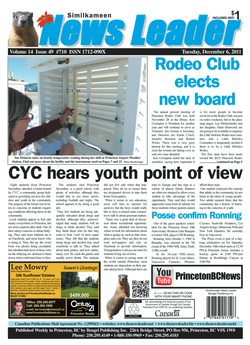 RODEO CLUB ELECTS NEW BOARD
The annual general meeting of Princeton Rodeo Club was held November 28 at the library. Ken Crompton is President for another year and will continue to serve as Treasurer. Sue Gereau is Secretary, and Directors are Karrie Crucil, Jennifer Bernard, and Robert Wicks. There was a very poor turnout for this meeting, and it is clear the women are taking over, as only two men
attended. Ken Crompton noted the lack of members, saying how important it is for more people to become involved in the Rodeo Club, not just on rodeo weekend, but in the planning stages. Lyn Melnechenko and her daughter, Dusti Henwood, are not going to be available to organize the Little Britches Rodeo next summer, and a Little Britches Committee is desperately needed if there is to be a Little Britches Rodeo. 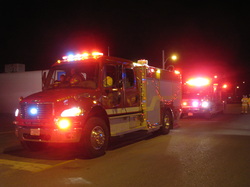 Photo: Arlene Arlow
Village of Keremeos celebrated the arrival of Winter with their annual Light-Up Celebration December 2 & 3. The event includes a Christmas Craft Fair, visits with Santa and the Light-Up Parade on Friday night. Here the Keremeos Volunteer Fire Department lights up the night sky with their impressive style of Christmas lights!

More Than Just Deer Around Here! 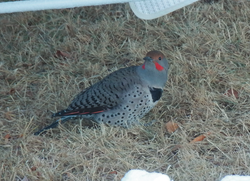 Copyright 2011 Bengel Publishing Inc.
Bird watchers keep a keen eye on winged visitors in and around their yards and have specially prepared bird seed mixes available to assist with Winter feeding. This male red-shafter Northern Flicker has been a frequent visitor to yards in the South Princeton area.