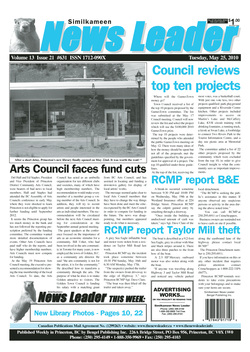 COUNCIL VOTES FOR WATER TAX BYLAW
Local residents living on Airport Road, Jaconson Road and in East Princeton face a water system parcel tax this year under new bylaws that received first, second and third readings at the May 17 Town Council meeting. Those residents affected have the option of paying the entire cost of the water supply or paying for it with an annual payment.

ARTS COUNCIL FACES FUND CUTS
Del Hall and Ed Staples, President and Vice President of Princeton District Community Arts Council, were bearers of bad news to local members. Hall and Staples had attended the BC Assembly of Arts Councils conference in early May where they were shocked to learn Princeton is not eligible to apply for further funding until September 2012.

GOLDCLIFF REPORTS NEW GOLD DRILL DISCOVERY
A new drill discovery of disseminated gold mineralization in the Thor zone on the Panorama Ridge Property near Hedley, BC was announced by Goldcliff Resources Corporation May 18. The Thor showing is centrally located between the York-Viking and Nordic gold zones on a southwest to northeast trend of gold mineralization along the crest of Panorama Ridge. 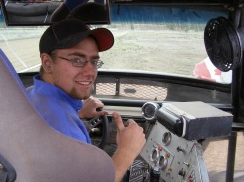 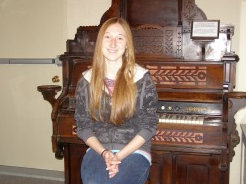 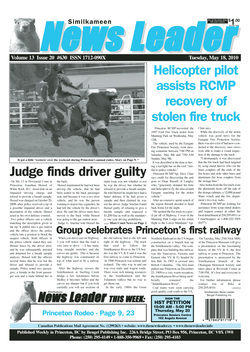 PUBLIC SELECTS PRIZE MONEY PLANS
A meeting held Wednesday, May 12th at the Skills Centre, offered local residents a lot of choices in how to spend the $100,000 GamesTown prize money. Large sheets of paper attached to one wall itemized the proposals put forward to the committee responsible for making a recommendation to Town Council as to which project to choose. The committee will review the choices and make a presentation to Town Council on Monday, May 17th.


PRINCETON'S MUSEUM SOCIETY LOOKS AHEAD
Lyle Thomas, Princeton's Recreation and Culture Director, attended the May 11th meeting of the Museum Society to show the new floor plan for the expanded museum. The pla features new washrooms, a boardroom for meetings, a new access to the basement, and an elevator, as well as an updated reception area. Members liked the plan.


GROUP CELEBRATES PRINCETON'S FIRST RAILWAY
When you drive east on Highway 3 you will notice the road is very easy to drive - it has many long straight stretches and the curves are gentle. This is because the highway was constructed on top of what used to be a railway bed. On Tuesday, May 25th Nick Mills of Princeton Museum will give a presentation on the fascinating history of the Vancouver, Victoria & Eastern (V V & E) Railway, the first railway to come to Princeton. The presentation will start at 7:00 PM and will take place at Riverside Centre. 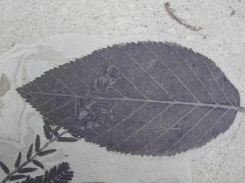 Copyright 2010 Bengel Publishing Inc.
Princeton Museum will open for the summer effective Saturday, May 22 and will remain open until Saturday, September 14th. Hours of operation will be 10:00 AM - 5:00 PM seven days a week (9:00 AM - 7:00 PM in July and August). As Princeton celebrates it's 150th birthday in 2010, the museum will have many historic displays ready for the season. One very popular part of the facility continues to be the extensive fossil and mineral collection in the Joe Pollard Wing. 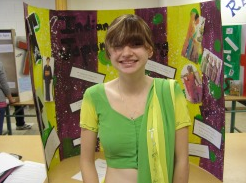 Copyright 2010 Bengel Publishing Inc.
Kendra Krenn wore a sari as part of her Social Studies project. A sari is a traditional garment wore by women in primarily Indian countries and cultures. Krenn's outfit enhanced her project's presentation and she had studied enough about it to answer many questions related to the garment, customs and designs. 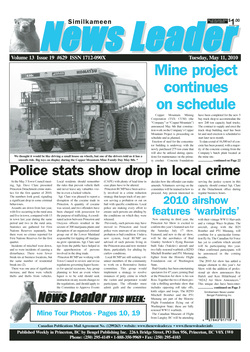 POLICE STATS SHOW CRIME DROP
At the May 3 Town Council meeting Sgt. Dave Clare presented Princeton Detachment crime statistics for the first quarter of 2010. The numbers look good, signaling a significant drop in some criminal behaviours. Assaults are down from last year, with five occurring in the rural area and five in town, compared with 13 in town last year during the same time period and two in the rural area.

PRINCETON TOWN COUNCIL NEWS
On April 26th Town Council met with representatives of the Overwaitea Foods Group to discuss plans for a new supermarket on Bridge Street. Construction is slated to begin in September with completion in June 2011. Councillor Marilyn Harkness told Council on May 3rd that the rural locum program has been extended to the end of the month. Council is hiring a private recruiter to help find physicians for Princeton.

FALL FAIR PLANS MORE YARD SALES
Fall Fair members hosted a community yard sale on May 1 at Princeton Fairgrounds and despite a bitter wind and cold temperatures, many of the people who rented tables asked if the Fall Fair would do it again. At the May 4 Fall Fair meeting members decided they would go ahead with monthly community yard sales, encouraging crafters and hobbyists to participate.

NEW POSSE EXECUTIVE MAKES CHANGES
The first regular meeting of the 2010/11 Princeton Posse Junior B Hockey Club took place May 4th at the Posse Lounge beside Princeton Arena. The Posse financial report showed the club had approximately $6,000 in outstanding bills on the books and additional expenses for ice rentals owing to Princeton Arena. The group is involved in a number of fundraising activities expected to increase cashflow before the start of the next hockey season. 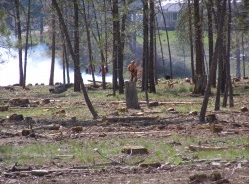 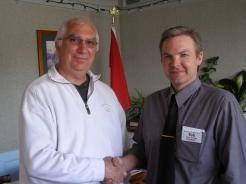 Copyright 2010 Bengel Publishing Inc.
Princeton Rotary Club President Randy Clark, left, welcomes Rob Bett to the Club. Bett, who worked in Princeton a few years ago at the local Overwaitea grocery store, returned to the community recently to assume the role of Manager at the very same store. Bett's application to Princeton Rotary Club was approved by members last month. 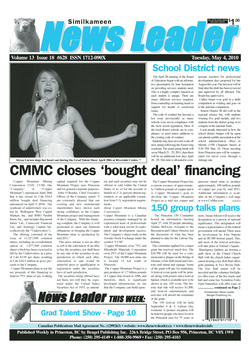 LOCAL GROUP RECEIVES HERITAGE GRANT
The Princeton 150 Society has been awarded a $16,700 Canadian Heritage grant from the Building Communities Through Arts & Heritage (BCAH) - Community Historical Anniversaries program to host Princeton's 150th Anniversary/Celebration throughout 2010. The funding will support small legacy projects and the Princeton 150 Festival being organized for September 4 & 5, 2010.

CMMC CLOSES BOUGHT DEAL FINANCING
Copper Mountain Mining Corporation announced April 26th that it had closed its $34.5-million (CDN) bought deal financing announced on April 5, 2010. The offering consisted of 11,327,500 common shares, including an overallotment option of 1,477,500 common shares. CMMC plans to use the net proceeds from this financing to fund its 75% share of any working capital required for the Copper Mountain Project near Princeton.

STATUE HONOURS KENNY McLEAN
On Saturday, May 8 fans, friends, family and dignitaries from across the country and the world of professional rodeo will gather to honour the memory of one of their beloved athletes, Kenny McLean. A statue, designed by artist Lois Hannah, will be unveiled at 11:00 AM in Centennial Park, Okanagan Falls. McLean, the only rodeo cowboy named to the Canadian and British Columbia Sports Hall of Fame, spent many years in Princeton. He and his wife, Paula lived on site at Sunflower Downs in the 1980s where he raised and trained paint horses. 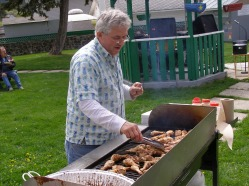 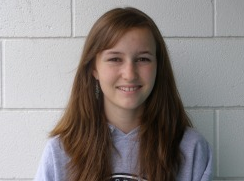 Copyright 2010 Bengel Publishing Inc.
Katelin Marshall is Princeton Secondary School Student of the Month. The Grade 11 student was nominated because, "she is very selfless with her time and does many things for others to benefit." PSS PAC sponsors the Student of the Month program.