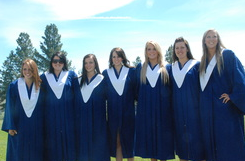 Photo: Dean Johnston
The First Annual Rebel Alumni game will be 7:00 PM Thursday December 23 at PSS Gym. This first event will feature the Lady Rebels squaring off with an Alumni team spread over the ages – currently there are 7 players confirmed with more to come. Anyone interested should contact Kirk at PSS or Dean – 250 295 0022.

December 23 is a perfect evening – people are home for the holidays and socializing is on everyone’s mind. If you were ever a Rebel, come celebrate Princeton basketball with those who have helped to again raise the Rebel banner high. Grab an old team mate and come to the gym. If you were not a Rebel why not just come on out and support local youth. Future plans include expanding format into both a Boy and Girl event. There will be door prizes and a half time shooting competition for any and all to participate. 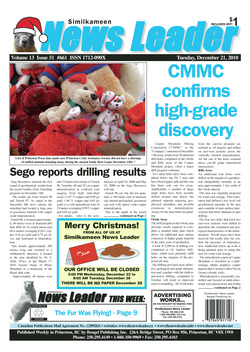 RCMP SEARCH FOR DRIVER AFTER POLICE CAR HIT
Keremeos RCMP report that at 10:38 PM on Thursday, December 16th an older two-toned (light colour over a black body) full-size extended cab pickup truck failed to negotiate the right hand curve at the bottom of the Keremeos hill adjacent to the Fire Hall on Highway 3. “The pickup truck side-swiped the marked police car driven by a South Okanagan Traffic Services member,” reports Cpl. B. Petersen of the SOTS Unit in Keremeos. “The in-car camera captured some details of the collision. The vehicle continued up the hill eastbound on the highway until it went out of sight.” Police say the pickup truck will have ‘substantial damage’ to the front driver’s side from the headlight back to the passenger cab. The SOTS member was shaken but not injured in the crash. “We have not been able to locate the vehicle at this time, and we are asking the public’s assistance to locate this vehicle,” Cpl. B. Petersen adds. If you have any information about the pickup truck or the collision, you are asked to contact your local RCMP Detachment, CrimeStoppers (1-800-222-8477) or South Okanagan Traffic Services at 250.499.2250.

HARKNESS WORKS ON HEALTH ISSUES
Councillor Marilyn Harkness reported to Town Council on December 6 regarding her portfolio, which covers health concerns in Princeton. Councillor Harkness described a meeting with a local citizen regarding the physician situation. She assured that person, and Council, that efforts to recruit more physicians is an ongoing project. Health Administrator Sheri Uribe will be retiring this month. The initiative called Communities for Kids, which runs the Family Centre on Veterans Avenue, has many excellent programs, but many of the low income parents do not attend due to transportation problems. Councillor Harkness told Council that transportation continues to be an issue for many elders, as well. Councillor Harkness said Princeton’s Communities for Kids group received praise from a visiting Director of the group, who said the local group is doing better than groups in many larger centers.

HARVEST STARTS IN JUNE
Mayor Randy McLean announced at the December 6 Town Council meeting that the Forest Corporation, in partnership with Upper Similkameen Indian Band, has been allocated 20,000 cubic meters of wood. Harvesting will not take place until June, 2011. Regarding the pine beetle situation, Mayor McLean learned the rate of infestation in the local forest area has dropped 50 percent, but is still very high. There are still spruce moth problems. He said the indications of a decline in infestation is positive news. 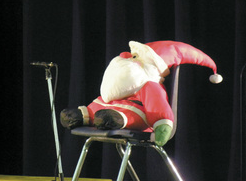 Photo: Desiree Cosman
The Staff and Management of Similkameen News Leader wish you a very Merry Christmas and Happy New Year. Our office will close for the Christmas Holiday at 5:00 PM on Wednesday, December 22nd and will re-open at 8:00 AM on Tuesday, December 28th. We will NOT be printing a paper on Monday, December 27th so we can all spend the holiday with family and friends. Thank you for your continued support throughout 2010! 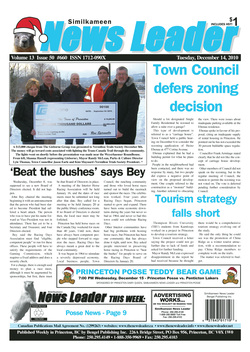 SPIRIT FESTIVAL PLANS CERAMIC MURAL
Robin Lowe and Ed Staples made a presentation to Town Council on December 6 to explain a request from the Arts Council to place a ceramic mural in the library foyer. This project is part of the Spirit Festival for which the Arts Council received a $10,000 grant. The Spirit Festival is a joint activity between the Arts Council and Upper Similkameen Indian Band. It has three components. First, art in a public place for the enjoyment of everyone. This would be the mural. Second, lessons about the history and traditions of the Similkameen Valley and its First Nations people. Third, a celebration for the community in the form of a powwow. The mural will embrace the theme through a collage of pictograph images on ceramic tiles. Ed Staples showed Town Council a few of the tiles he has prepared, using pictograph images found along Old Hedley Road. The tiles are very attractive, very earthy. The spirit of the tiles would honour First Nations people. Staples told Council the Indian Band is applying to make the original pictographs along Old Hedley Road a national historic site to be called the Spirit Trail. Mayor Randy McLean spoke enthusiastically about the concept and the project. He said it would be a celebration of the Town and the Upper Similkameen Band working together, as they have done for many years. He would like to see some sort of interpretive plaque alongside the mural when it is completed.

COUNCIL DEFERS MUSEUM FUNDING
Princeton & District Museum submitted a request to Town Council for a $24,000 operating fund. This money is used to pay the Operations Manager’s salary. The Museum Society has little funding of its own, and is currently facing a shortfall in funding for its renovations, as the Town borrowed $100,000 of the renovations fund to complete the library. The Town does not have sufficient funds to pay back the money borrowed. Town Council deferred a decision pending consideration during the budget process. Councillor Frank Armitage, who is liaison Councillor for the Museum Society, stated there will be a call for quotes on a scaled-down version of the renovation plans. The remaining improvements will be done as funds become available. 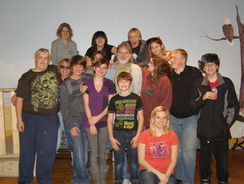 Copyright 2010 Bengel Publishing Inc.
Similkameen News Leader Owner/Publisher George Elliott turned 50 last week. He was the 'target' of a surprise party hosted in his honour by the youth members of Living Water Foursquare Church. Elliott was thrilled with the fact that over 20 people attended and celebrated the milestone with him dining on hot dogs and cupcakes. 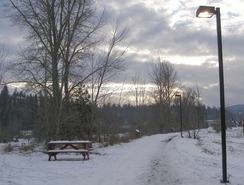 Copyright 2010 Bengel Publishing Inc.
The section of the Trans-Canada Trail that passes through the Town of Princeton (between the Bridge of Dreams and the Tunnel under Highway 3) now has lights along the path. Hayes Creek Electric handled most of the electrical work with trenching handled late in the year by Model Transfer. A $15,000 cheque from The Gisborne Group presented December 8th assisted in covering some of the costs associated with the project. 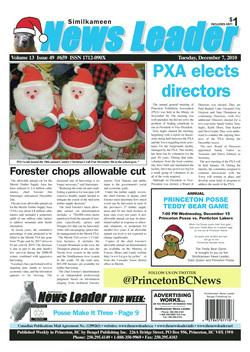 FORESTER CHOPS ALLOWABLE CUT
The allowable annual cut for the Merritt Timber Supply Area has been reduced to 2.4 million cubic metres, chief forester Jim Snetsinger announced December 2nd. The previous allowable annual cut for the Merritt Timber Supply Area (TSA) was about 2.8 million cubic metres and included a temporary uplift of one million cubic metres to address mountain pine beetle infestation. In recent years, the cumulative percentage of pine projected to be killed in the Merritt TSA has gone from 79 per cent by 2017 down to 65 per cent by 2019. The decrease is due in part to the pine beetle's low survival during the 2008-09 winter, combined with aggressive harvesting. "Licensees have performed well in targeting pine stands to recover economic value, and the infestation appears to be slowing. The increased rate of harvesting is no longer necessary," said Snetsinger. "Reducing the total cut and establishing a partition for non-pine will conserve healthy stands needed to mitigate the extent of the mid-term timber supply decrease." The chief forester's latest allowable annual cut determination includes a 720,000-cubic-metre partition to limit the amount of non-pine (specifically spruce and Douglas-fir) that can be harvested, while still encouraging spruce beetle management in the Merritt TSA. The Merritt TSA covers 1.13 million hectares. It includes the Cascade Mountains in the west, the Thompson plateau in the east, the Nicola river system in the north, and the Similkameen river system in the south. Of the total area, 803,558 hectares are available for timber harvesting.

PXA ELECTS DIRECTORS
The annual general meeting of Princeton Exhibition Association (PXA) was held at the library on November 30. The meeting was well-attended, but did not solve the problem of finding somebody to run as President or Vice-President.  Terry Inglis chaired the meeting, beginning with a report on discussions being held between the PXA and the Town regarding more assistance for the fairgrounds facility managed by the PXA. This facility has been run by volunteers for the past 50 years. During that time, volunteers from the local community have built and maintained the facility, but it has grown too big for a small group of volunteers to do all of the work required. Although no President or Vice-President was elected, a Board of Directors was elected. They are Paul Bedard, Luke Girouard, Eric Gregson and Stan Thompson as continuing Directors, with five additional Directors elected for a two-year term: Sandy Gabor, Terry Inglis, Keith Olsen, Dan Kastor and Dave Gould. They were authorized to conduct the ongoing business of the PXA during the December recess. The new Board of Directors appointed Sandy Gabor as Treasurer and Dawn Johnson as Secretary. The next meeting of the PXA will be held January 18. During the interim, the committee assigned to continue discussions with the Town will remain in place and develop some kind of program to address the needs of the PXA. 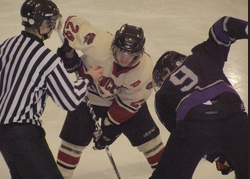 Copyright 2010 Bengel Publishing Inc.
Princeton Posse, the local Junior B hockey team in the KIJHL (Kootenay International Junior Hockey League) have out shot opponents in the past 13 games (up to December 3rd) and have only been out shot 3 times in their past 19 games. The boys showed the home crowd December 3rd that they mean business with a sound thrashing of North Okanagan Knights. The final score was 5-1 for Princeton. 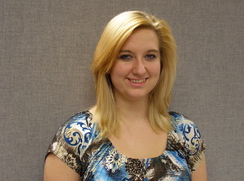 Copyright 2010 Bengel Publishing Inc.
Her name is Desiree Cosman and she's currently a Grade 12 student at Princeton Secondary School. Des is also the Similkameen News Leader's Youth Rep. She is working on providing news and information from PSS and will also be 'on the street' selling mail subscriptions to the Similkameen News Leader. Watch for her in your neighbourhood soon!