WATER, SEWER RATES INCREASETown Council has approved a hike in both water and sewer rates for 2010. The average home owner will pay $267 for water and $128 for sewer. Early payment will reduce the cost by 10 percent. Mayor Randy McLean justified the increase by describing the need
to keep a reserve fund to allow for proper maintenance of the water system. He noted many communities have been forced to go to an extremely costly ($millions) water filtration system due to their inability to provide clean water through ordinary measures. He added the same philosophy applies to the sewerage system. Town Council will not allow any
more septic tanks within municipal boundaries. In order to properly service waste water demands, a reserve fund is essential.

TOWN AGREES TO JUSTICE INITIATIVE
In 2009, Princeton RCMP received funding approval for a program called Restorative Justice (RJ). Start-up funding is $5,000, with annual grants of $2,500. The
problem for Princeton RCMP is that it is not permitted to administer the funds. On January 18, Town Council
agreed to administer the funds on behalf of the RJ program. Restorative Justice is program in which a person accused of a crime (not a major crime such as murder) is asked to meet with members of the community and any person or persons who suffered harm as the result of the crime. Many people do not believe the present criminal justice system and the court system do enough to meet the needs of the community, victims, or offenders.
In RJ, the offender hears the views of the community and the victim or victims, and then a settlement is negotiated. The offender has the opportunity to make amends. This process satisfies the needs of the community and is less costly than having the offender go through the court system. Supporters of RJ say it prevents the offender from repeating the crime. There are people in Princeton interested in participating in this process. With administration problems solved, the program can be established. 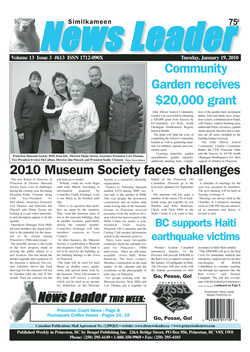 2010 MUSEUM SOCIETY FACES CHALLENGES
The new Board of Directors of Princeton & District Museum Society faces a lot of challenges during the coming year. Incoming President Kathy Clement, along with Vice-President Ev McCallum, Secretary/Treasurer Lori Thomas, and Directors Jim Pincock and Diane Sterne are looking at a year when uncertainty and disruption appear to be the agenda. Operations Manager Nick Mills advised members the major problem is the potential for the museum to be closed during Princeton's 150th anniversary. The possible closure is the result of the slow progress made in moving the public library to a new location. This has meant the needed upgrade and expansion of the museum is delayed. The current schedule shows the final drawings for the museum will not be finished until the end of this month. Then the contract for the job must go to tender. Nobody could see work begin until early March. According to information acquired by Councillor Frank Armitage, work is not likely to be finished until July. There is no question that members are upset by the situation. They want the museum open, if not in the museum building, then at another location, particularly during the summer months. Councillor Armitage will take members' concerns to Town Council. In other business, the Museum Society is establishing a Museum Development Fund. This fund is not to be used for the building, as the building belongs to the Town of Princeton. The fund will be used for such things as display cases, equipment, and special items used by the museum. Those who donate to this fund will receive a receipt which can be used as an income tax deduction, as the Museum Society is a registered charitable organization. Visitors to Princeton Museum totalled 5,074 during 2009, second only to the number in 2008. This was despite the downtown construction and an earlier than usual closing date of the museum. Groups in Princeton received assistance from the archives division which has been located in the Skills Centre for nearly a year. Vermilion Trails Society, Princeton 150 Committee and the Curling Club needed information stored in the museum archives. There were many favourable comments about the calendar created for Princeton's 150th anniversary. There are still many available (Town Hall, Home Hardware, The News Leader). Members commented on the high quality of the calendar and the excellence of the photographs of early days in Princeton. Two people working with the Museum Society, Nick Mills and Lori Thomas put it together on behalf of the Princeton 150 Committee. Proceeds go to the festivities planned for September 4. The museum still has quite a number of the music CD of traditional songs put together by Jon Bartlett and Rika Ruebsaat. Check with Nick Mills at the Skills Centre if you want to buy one. A schedule of meetings for the year was accepted by members. The next meeting will be held on Tuesday, February 9. Meetings are always held at the Chamber of Commerce meeting room at 2:00 PM Anyone interested in museums and history is invited to join. 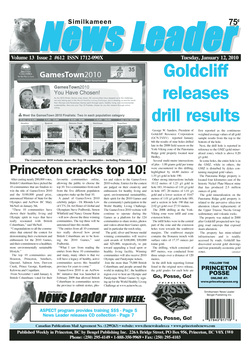 GOLDCLIFF RELEASES DRILL RESULTSGeorge W. Sanders, President of Goldcliff Resource Corporation
(GCN.TSXV) reported January 6th the results of nine holes drilled late in the 2008 field season on the York-Viking zone of the Panorama Ridge gold property located near Hedley. Several multi-metre intersections
of plus - 1.00 grams gold per tonne were encountered in this drilling, highlighted by 44.80 metres of 1.55 g/t gold in hole 190. Other strong intersections include
10.12 metres of 1.23 g/t gold in hole 183, 10 metres of 1.01 g/t gold in hole 187, 20 metres of 1.01 g/t gold and a lower section of 10.67 metres of 1.01 g/t gold in hole 189, and a section in hole 190 that ran 2.02 g/t gold over 27.53 metres. The 2008 drilling at the York-
Viking zone were infill and zone extension holes. The infill holes were in the central part of the zone and the extension holes were towards the southwest margins. The southwest margin contains the Bonanza trench with surface vales of 17.37 ounces per tonne gold.
The drilling, which consisted of 897 metres, was conducted from three setups over a distance of 120
metres. In the drill hole reporting format listed in the original news release, the gold grades for each hole are first reported as the continuous weighted average values of all gold sample results from the top to the bottom of the hole. Next, the drill hole is reported in reference to the GMZ (gold mineralized zone), which is above 0.20 g/t gold. In some holes, the entire hole is in the GMZ, while in others, the GMZ is disturbed by dykes containing marginal gold values. The Panorama Ridge property is located four kilometres east of the historic Nickel Plate-Mascot mine that has produced 2.5 million ounces of gold. The gold mineralization on the Panorama Ridge gold property is related to the pervasive silica-iron alteration (skarn replacement) of the Upper Triassic Nicola Group sedimentary and volcanic rocks. The property was staked in 2000 after Goldcliff prospected new logging road outcrops that exposed skarn alteration. The property has mine-related
infrastructure and is readily accessed by roads. 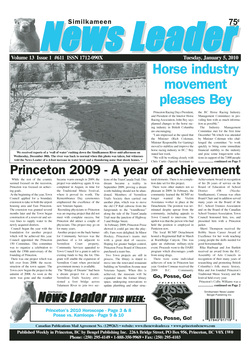 POSSE TAKE STORM IN OTThe first Princeton Posse home game of 2010 followed a two-week Christmas break and put the home team against Kamloops Storm. With only 18 players dressed, Kamloops would be faced with longer or more frequent shifts for the shorter bench, which assisted Princeton only slightly. Princeton scored first at 17:17 on the power play. Brendan Stephen took the puck from behind his own net and sent a forward pass to Lee Muir while crossing the Posse blue line. Muir picked up the pass at centre ice and dropped it back to Stephen once he crossed over the centre line. Stephen took the puck past the Kamloops blue line and fired a sharp angle shot from near the boards on the right side. It sailed across the front of the Kamloops net and bounced off of a Kamloops player and into the goal. Princeton’s second goal came on another power play at 11:49. Lee Muir fired a shot on goal and Evan Stack popped the rebound into the net. Kamloops scored with 1:18 left in
the period. Posse Assistant Coach Kevin Robillard described the play during the first intermission with this observation: “From my standpoint I think we’re really dictating the control of play. We have to be careful here that we’re not getting too offensively minded from our back line.” Robillard explained, “A couple of times we pinched down working to keep the puck in play and we didn’t have that support which gave them (Kamloops) two-on-ones or three-on-twos, so we’ve got to look at that.” The second period saw Kamloops tie the game with a short-handed goal at 16:30. Princeton took back the lead at 10:45 (Chad Brears from Spencer Kristensen and Jared Hidber). Kamloops tied the game again at 10:49 in the third period. Both teams battled hard to break the tie but could not, which put the game into overtime. With 2:40 left in the extra frame Princeton’s Devon Grossler took the puck into the Kamloops zone and tried to pass out front but the puck bounced off a Storm defender. Ben Morgan was in the right spot at the right time and took control of the puck and passed it out to Grossler from deep in the left corner. Grossler sent a short wrist shot on goal, which was kicked away. Lee Muir took the rebound from the right side and tucked it away for the winning goal. Final score: Princeton 4, Kamloops 3 OT. Shots on goal: Princeton 40, Kamloops 25. Penalties in minutes: Princeton 3 for 6-minutes, Kamloops 4 for 8- minutes. Princeton spends the majority of January on the road with their next home game not scheduled until January 29th – against Kamloops.