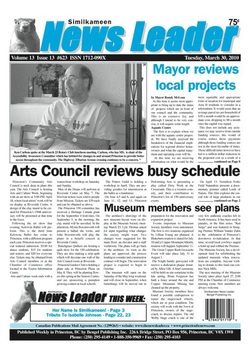 MUSEUM MEMBERS SEE PLANS
The architect's drawings of the new museum layout were on display at the Museum Society meeting March 23. Lyle Thomas asked for input regarding what changes the society might want. Two changes were suggested for the main floor: an elevator and a staff washroom. The plans will go back to the architect. As soon as the plans are approved, the process leading to a tender and construction contract will begin. The renovation project is expected to begin in October. The museum will open on the Saturday of the May long weekend, and will close in September, when furnishings will be moved out in preparation for the renovation and expansion project. Events important to Museum Society members were announced. The first is two reunions organized by Lillian Young are planned. A Blakeburn reunion is slated for July 10 and a Copper Mountain/Allenby reunion will happen September 11. The Great Copper Rush Geocache Event will take place July 31 to August 1. 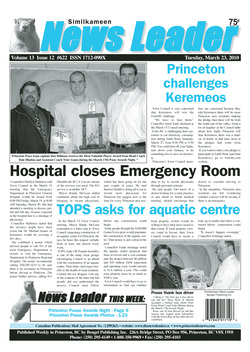 HOSPITAL CLOSES EMERGENCY ROOM
Councillor Marilyn Harkness told Town Council at the March 15 meeting that the Emergency Department at Princeton General Hospital would be closed from 8:00 PM Friday, March 19, to 8:00 AM Saturday, March 20. She had attended a meeting to discuss partial and full day closures expected at the hospital due to a shortage of physicians. Councillor Harkness stated that the closures might have been worse but Dr. Michael Jeanes of Keremeos would be covering a few days.
She exhibited a poster which advised people to call 911 if the local Emergency Department is closed, or visit the Emergency Department in Penticton Regional Hospital. The poster recommends calling 250.295.3233 to be sure there is no assistance in Princeton before driving to Penticton. The poster further advises calling 811 (HealthLink BC) if you are unsure of the services you need. The 811 service is available 24/7. Mayor Randy McLean added comments about the high cost of bringing in locum physicians, which has been going on for the past couple of years. He said Interior Health is doing all it can to recruit more physicians for Princeton but suggest now is the time for every Princeton area resident to try to recruit physicians through personal contacts. He said people who know of a doctor looking for a rural practice, or just about to finish medical training, should encourage that doctor to consider moving to Princeton. In the meantime, Princeton area residents are left wondering whether a doctor will be on duty if there is an emergency. 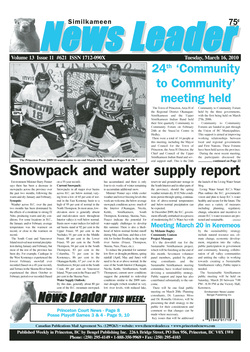 PXA LOOKS AT WORK AHEAD
Princeton Exhibition Association (PXA) met at Town Hall March 9 to review what has to be done this year. The money situation is very tight, but the need to continue upkeep of the fairgrounds does not stop. Wayne Hooper said he has the paint to redecorate the washrooms. He does not know if he will be able to do the concession. There is a lot of painting to be done.
The former owners of Princeton Paint and Decorating donated 25 gallons of paint to the PXA in appreciation for their business. Floodlights will be installed this spring. There is a lot of work to be done in general maintenance of the facility. The grandstand must have work done on it and the grounds always need a spring clean-up. As the work is done by volunteers working with a limited amount of money, it is difficult to get everything done that needs doing. Two new events were approved for the coming months. On May 1, the Fall Fair will hold a combination yard sale and flea market in which people with goods to sell can rent a table or space. This event has been successful in the past. The second event is the 150 Dewdney Trail Ride. This takes place August 20, 21 and 22. The participating riders will rent the horse facilities for the weekend. Other events taking place include Princeton Rodeo on May 15, horse racing on July 3, the ATV/BC get-together in mid-July, Fall Fair in late August and the bull riding finals in mid-September.
4-H is no longer active in Princeton and some concern was expressed about storage of the dog trial equipment. Another concern was storage of the spook house equipment, as the firemen no longer do this Halloween event for local children. PXA President John Bey said he is still looking for somebody to run the concession for the big events. Keith Olsen, President of Fall Fair, told Bey the Fall Fair will run its own concession. Vendor forms are being prepared for use by all of the groups who host events at the fairgrounds. There are many vendors who want to display goods for sale at all the major events. The PXA wants a single vendor rate for all events. Members agreed to change the date of the PXA meetings from the second Tuesday of the month to the third Tuesday, making the next PXA meeting on April 20. 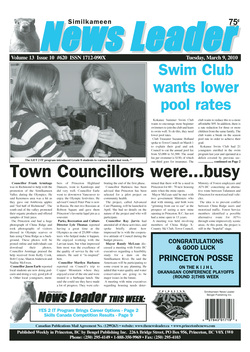 SWIM CLUB WANTS LOWER POOL RATES
Kokanee Summer Swim Club wants to encourage more beginner swimmers to join the club and learn to swim well. To do this, they need lower pool rates. Club Treasurer Suzanne Holland spoke to Town Council on March 1 to explain their goal and ask Council to cut the annual pool fee from $3,000 to $1,500. The usual fee per swimmer is $150, of which one-third goes for insurance. The club wants to reduce this to a more affordable $95. In addition, there is a rate reduction for three or more children from the same family. The club wants a break on the season pool rate in order to achieve their goal. Kokanee Swim Club had 21 youngsters enrolled in the swim program last year and operated at a deficit covered by previous savings. As the treasurer pointed out, the club cannot fund from savings indefinitely. They must have more beginner swimmers, as well as some new equipment. The club has hired a swim coach much of whose pay will be covered by a summer employment grant. This coach has been very successful with his swimmers going to provincials, and he is prepared to stay with Kokanee Swim Club for two or three summers. The club believes the new coach will encourage older swimmers to stay in training and encourage younger swimmers to develop their skills. The local swim club program focuses on endurance and strength training, and promotes competitive swimming as swimmers improve their skills. Swimmers from the club can go on to learn life saving and coaching skills which can lead to employment opportunities as they qualify. Council asked some questions then referred the matter to budget. 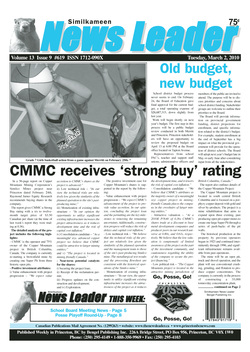 NERVOUS ENERGY NETS PLAYOFF WIN
Princeton Posse entered the second round of KIJHL playoffs February 27th hosting Sicamous Eagles in the first game of a best of seven series. Having finished the regular season in second place in their division, the Posse earned a bye, which allowed them to rest and heal sitting out of the first round. Okanagan/Shuswap Division Vice President Jim Harrington presented Posse team captain Dan Hillman with the Top Scorer Award just prior to the opening face off.  Hillman finished the season in fifth place overall in the league with 70 points (18 goals and 52 assists) collected over 48 games played but his stats gave him the top spot in the division. The game itself saw the Posse full of energy. Nervous energy (in the words of Assistant Coach Kevin Robillard) which kept the boys on their toes and also cost them a few times. Princeton scored first at 15:19 when Ben Reinbolt popped a rebound into the Eagle goal. Assists went to Dayton Shaw and Brendan Stephen. Sicamous snatched control of the game and scored three unanswered goals in 5-minutes and 19-seconds which sent a message to the home team and saw Princeton shift into gear and add three goals of their own in only 5-minutes and 27-seconds (5:39  Chard Brears from Ben Morgan, 3:05  Spencer Kristensen from Brendan Stephen and Dan Hillman and on the power play with 12.5-seconds left  Spencer Kristensen from Brendan Stephen and Lee Muir). "The two teams took advantage of the intermission to tighten the defense systems," Robillard stated on the Posse website (www.princetonposse.org). "Both teams looked to reduce the scoring chances that dominated the first period." Princeton scored twice in the second. The first goal, at 9:52 (Brooks Christensen from Lee Muir and Chad Brears) was on the power play and the second at 1:16 (Chard Brears from Brooks Christensen) was short handed. The third period saw Sicamous rally back with three goals of their own to tie the game at 6-all. At 8:27 Princeton's Brendan Stephen chipped a puck away from the Sicamous defense in the neutral zone and created a 2-on-1 once past the defensemen. "Using the Posse forward as a decoy Stephen sniped a wrist shot over the Eagle goalie to give the Posse a 7-6 lead," Robillard described the play online.  Final score: Princeton 7, Sicamous 6. Shots on goal: Princeton 27, Sicamous 23. Penalties in minutes: Sicamous 6 for 12-minutes, Princeton 5 for 10-minutes.