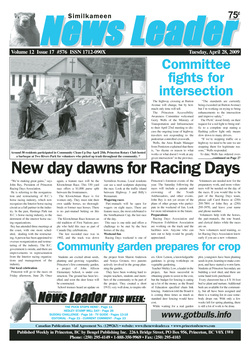 COMMUNITY GARDEN PREPARES FOR CROP
Students are excited about seeds, planting and growing vegetables. Princeton’s first community garden, a project of John Allison Elementary School, is under construction. The ground has been levelled, and soon the deer fence will be constructed. School trustees heard an update on the project from Sharon Anderson and Sonya Gronen, two parents actively involved in the group planning the garden. They have been working hard to inspire teachers, students and members of the community to be part of the project. They created a short DVD, very well done, to inspire others. Glow Lemon, a knowledgeable gardener, is giving workshops on vegetable gardening. Teacher Shirley Low, a leader in the project, has been successful in obtaining grants to assist in the cost, but the budget for fencing is eating up a lot of the money as the Board of Education specified chain link fencing. Anderson told the Board it is costing three times as much as standard deer fencing would have cost. While waiting for a real garden plot, youngsters have been planting seeds in pots, learning to make compost, and have started a worm farm. Students at Princeton Secondary are building a tool shed, and there are some hand tools purchased. Every classroom has a 4 X 16 foot bed to plant and nurture. Additional beds are available for the community, but all have been assigned and there is a waiting list in case somebody drops out. With only a few weeks left for spring planting, there is still a lot of work to be done.

COUNCIL ADOPTS PRIORITY STRATEGY
Town Council has taken a step toward more efficient planning and budgeting. A set of priority guidelines and priorities chart will be created for next year’s budget work. Members of Town Council have attended training sessions during the past two months on how to set priorities and work with the guidelines. The guidelines include a timetable. Current priorities are listed under headings of Council’s areas of responsibility, such as public works, administration, and so on. Council has a long list of things to do, and as one item on the priority list is achieved, another item can move onto the list. Councillor Marilyn Harkness likened it to her personal “to do” list. Priorities and progress will be reviewed at intervals throughout the year. 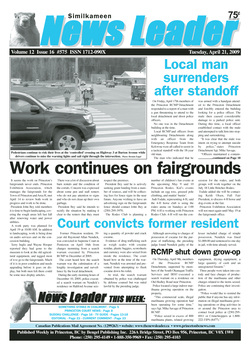 COURT CONVICTS FORMER RESIDENT
Former Princeton resident, 39-year old Raymond Allan Nendick, was convicted in Supreme Court in Penticton on April 16th from charges stemming from a search warrant executed by Princeton RCMP in December of 2005. The court heard how the search warrant was the culmination of a lengthy investigation and surveillance by the local detachment. During the early morning hours of December 10, 2005, police executed a search warrant on Nendick’s residence on Haliford Avenue seizing a quantity of powder and crack cocaine. Evidence of drug trafficking such as weigh scales with cocaine residue, plastic baggies, scoresheets and currency were also seized from inside the residence. The court heard how at the time of the warrant, Nendick was arrested and prevented from attempting to flush cocaine down his toilet. At trial, the search warrant obtained by police was challenged by defense counsel but was ruled lawful by the presiding judge. Although answering to charges of possession of cocaine for the purpose of trafficking, the presiding judge found Nendick guilty of the lesser included charge of simple possession. Nendick was fined $1,000.00 and sentenced to one day in jail, with time already served.

CHAMBER ELECTS NEW EXECUTIVE
The Princeton and District Chamber of Commerce welcomed their new Board at their AGM on April 9th. President Olsen thanked the outgoing and the new Directors for their commitment and their time. With a new Board in place they will divide the Chamber operation into portfolios and each new Director will be assigned a portfolio suitable to their interests, experience and talents. John Singleton has been contacted to facilitate a strategic plan that will build the Chamber into a viable organization that will fulfill the needs of Princeton’s business community and attract new businesses. Councillor Armitage said he was pleased with the new Board and the new portfolio approach. He sees the new Board as a mature Board who bring great backgrounds and benefits to the Chamber and looks forward to working closely with them. The Chamber is looking forward to involvement with all of the business in the Community. If you are interested in being part of one of their Committees drop in and see them or join them at one of their meetings at 5:30 PM on the last Thursday of the month. 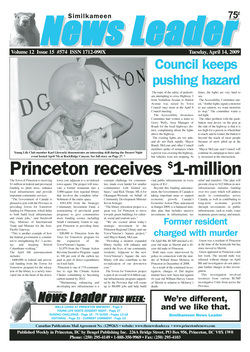 COUNCIL KEEPS PUSHING HAZARD
The topic of the safety of pedestrians attempting to cross Highway 3 from Vermilion Avenue to Burton
Avenue was raised by Town Council once more at the April 6 Council meeting. The Accessibility Awareness Committee had written a letter to Gerry Wells, Area Manager of Roads for the local highways district, complaining about the lights above the highway. The existing lights are too pale, and do not flash rapidly. Mayor Randy McLean and other Council members spoke of instances when a person was crossing the highway, but vehicles were not stopping. At times, the lights are very hard to see. The Accessibility Committee stated, “Amber lights signal a motorist to use caution, we want motorists to stop.” The committee wants a red light. The other problem with the pushbutton stop device on the post at the side of the highway is that it is too high for a person in wheelchair to reach, and in winter, the button is beyond the reach of most people because of snow piled up at the curb. Mayor McLean said Council will continue its campaign to have safety increased at the intersection.

FORMER RESIDENT CHARGED WITH MURDER
On April 8th, RCMP arrested a 41-year old male in Merritt and a 45-year old male in Princeton. Both men were interviewed by police in connection with the murder of Willard Bruce McInroy in Princeton in December of 2008. As a result of the continued investigation, charges of 2nd degree murder have now been laid against 41-year old William Harvey Green of Merritt in relation to McInroy’s death. Green was a resident of Princeton at the time of the homicide but has since moved to Merritt. Green appeared in Penticton court last week. The second male was released without charge on April 8th and investigators do not anticipate further charges in this investigation. This investigation involved resources from various RCMP investigative Units from across the Province. 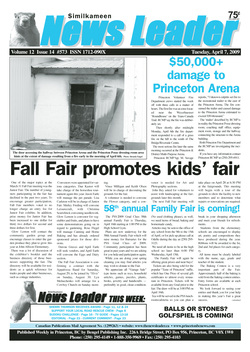 $50,000+ DAMAGE TO PRINCETON ARENA
Princeton Volunteer Fire Department crews started the week off with three calls in a matter of hours. The first fire was at a tree located near the Weyerhaeuser ‘Roundhouse’ on the Trans-Canada Trail. RCMP say the fire was deliberately set. Then shortly after midnight Monday, April 6th the fire department responded to a call of a grass fire on the hill to the south of The Bridge/Riverside Centre. The most serious fire later the same morning occurred at the Princeton & District Multi-Purpose Arena. Princeton RCMP Sgt. M. Savage reports, “Unknown culprits set fire to the recreational trailer to the east of the Princeton Arena. The fire consumed the trailer and caused damage to the Princeton Arena estimated to exceed $50-thousand.” The ‘trailer’ described by RCMP is in reality the Princeton Posse dressing room, coaching staff office, equipment room, storage and the hallway connecting the structure to the Arena building. Both Princeton Fire Department and the RCMP are investigating the incidents. If you have any information contact Princeton RCMP at (250) 295-6911.

THOMSON RECEIVES AWARD
On Tuesday, March 24th, ProMOTION Plus honoured Sherri Thomson and Amber Zirnhelt, this year’s Bobbie Steen Award of Excellence recipients at the annual ceremony, held in conjunction with Sport BC President’s Awards at the River Rock Casino in Richmond, BC. Congratulations to everyone who was nominated for the phenomenal work that you do for women and girls in sport. The Career Achievement Award recognizes outstanding role models who have, over the course of their career championed women in sport and physical activity. 2009 CAREER ACHIEVEMENT AWARD: SHERRI THOMSON Sherri was drawn to the grace and power of horses early in her life. Over the course of her extensive career as an athlete, coach and trainer, Sherri has become a magnet for young female riders and loves to share her knowledge and passion for the sport of Reining with these young competitors. Sherri’s phenomenal work ethic makes her an amazing role model who has had a profound impact on the lives of her young protégés. This is evidenced by the love and dedication of her students to Reining, and by the fact that they spend most of their free time working with Sherri and the horses.  The Bobbie Steen Awards of Excellence are presented annually by the following partners: BC Games Society, BC Sport and Recreation Branch, Sport BC and ProMOTION Plus. The Bobbie Steen Awards of Excellence were created to recognize outstanding individuals or organizations who demonstrate exemplary leadership in sport and recreation, promoting access and opportunity for girls and women in the province of British Columbia. The next nomination deadline will be February 2010.