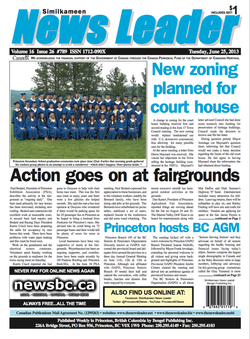 LETTERS OBJECT TO ZONING CHANGE
A hearing was held June 17 regarding a request by owners of a building on Burton Avenue to have a change in the use of the building.  The new building was constructed to feature commercial occupants on the ground floor and residential occupants on the second floor.  The request by the owner was to allow residential occupancy in what was originally planned as commercial space. Town Council received two letters from those objecting to the request. The first was from a resident in the area who had requested, several years ago, to have zoning changed so he could have a commercial enterprise offering overnight accommodation. His request was denied on the grounds it was not suitable in a residential area.  He objected to changing the original plan for the building. The second letter objected on the grounds that adding more rental units to the already glutted rental unit market was not in the best interest of those who already own rental units.  He did not want the original plan changed. Council has not made a decision about the request. 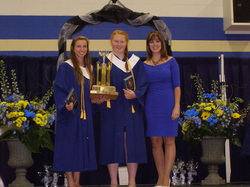 MAN FINED FOR BREACH
David C.E. Thomas, of Princeton, appeared in Provincial Court in Princeton on June 13 to plead guilty to a charge of breach of a probation order.  He had been placed on probation in July 2010 and one of the conditions was that he pay $333 restitution.  By the end of his probation, he had not done so. Thomas has since paid the restitution amount, but not according to the conditions of probation.  As he had a history of breaching probation orders, Judge Shaw ordered him to pay a $500 fine.

BIG FINE FOR NO LICENCE
Matthew Bill Ens, a Merritt resident, appeared in Provincial Court in Princeton on June 13 to plead guilty to a charge of driving without a driver's licence.  He was stopped for speeding in November 2012 and could
not produce a driver's licence. It had been suspended and he was originally charged with driving while prohibited but  entered a guilty plea to a lesser charge.  He was ordered to pay a $750 fine plus $112.50 in a victim fine surcharge.

BOARD PRAISES LITERACY PROGRESS
Principal Barry Clarke, teacher Raeleen Campana and Literacy Leader Dierra Maynard made a combined presentation to the Board of Education on June 12 about the progress being made toward improving reading skills of students. Dierra Maynard reviewed the success of The Amazing Literacy Race which was a day-long project held last month in downtown Princeton.  Ninety-seven students and 40 volunteers participated.  There were many sponsors and contributors from local businesses and service groups.  Maynard said students learned literacy is more than reading and writing. Trustee Leah Ward was generous in her praise of the work Maynard had done to make the race day a success.  Board Chair Gordon Comeau added the Board's commendation of Maynard's effort. Principal Clark introduced the concept of 'literacy intervention',  a program designed to assess why some students continue to have difficulty either reading or comprehending what they read. He introduced teacher Raeleen Campana, who explained how some students need extra individual assistance.  She then introduced several students who explained to the Board how they had learned better reading skills. As each student presented his or her experience, their success was applauded. 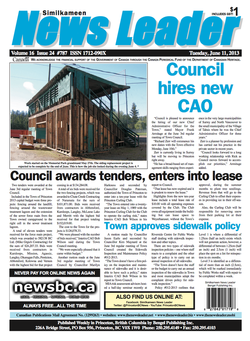 KOOPMANS CHARGED WITH MURDER
John Koopmans, age 49, of Princeton, appeared in court in Penticton on June 5, charged with two counts of murder and one count of attempted murder related to shootings that occurred in Princeton in April this year. Koopmans lawyer told the court he had just received the particulars of the case and had not had time to read them.  The next court appearance will be on June 19.

COUNCIL AUTORIZES FIRE PROTECTION AGREEMENT
The Town of Princeton was authorized to execute a Fire Protection and Suppression Agreement with Area H following a motion made by Councilor Jason Earle and seconded by Councillor Douglas Pateman at the June 3rd regular meeting of Town Council. Council entered into an agreement in 2004 with the RDOS for the Town to provide fire protection and suppression services to a small part of Area H that surrounds the Town. That agreement expired in 2007. "Since that time, the Town has continued to provide the service and the RDOS has paid for that service," states Interim CAO Bob Wilson in his report to Council. "It is wise to document that service in a new agreement." Wilson says he, the Mayor, Area H Director, Fire Chief and Deputy recently reviewed the agreement and that few changes were made.,About a third of the fire calls received by the Princeton Fire Department are from Area H and the RDOS pays a third of the operating and capital costs.

PXA COMPLETES UPGRADE
Thanks to the efforts of Area H Director Brad Hope,  Princeton Exhibition Association (PXA) has been able to access a $30,000 grant to upgrade electrical systems and energy saving lighting throughout the fairgrounds. With the cooperation of the Town of Princeton, owner of the fairgrounds property, the application was successful. Funding comes through the provincial government fuel tax rebate.  The PXA is also eligible for FortisBC energy saving rebates after the upgrade is assessed. Hayes Creek Electric was contracted in April to work with PXA members to develop a plan for the upgrades, and has been doing the work according to plan.  A major part of the project was the new lighting fixtures in the agricultural barn, a building which accommodates horse stalls and an exercise arena.  Those who use the barn are thrilled with the new lighting. Other buildings have received new lighting and changes have been made to electrical services in the concession building and grandstand. Area H Director Hope and Mayor Frank Armitage met with PXA President Paul Bedard and Vice-President Dan Kastor, along with Hayes Creek Electric employees Greg Palmer and Jim Barnes on June 4 to review the upgrades in the Ag barn. Both Director Hope and Mayor Armitage congratulated Bedard, Kastor and the PXA membership for their proactive efforts to modernize the fairgrounds facility.  Bedard and Kastor said they are working with an excellent Board of Directors who want to get things done and who get along well with each other.  They outlined some of the other projects being done this year, which includes upgrades of the other barns and the grandstand. 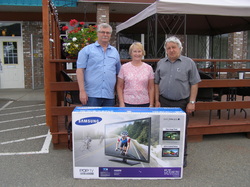 Copyright 2013 Bengel Publishing Inc.
Two of the five Princeton participants in an upcoming Journey of Compassion Missions Trip to Nicaragua hosted their second fundraising dinner June 7th. Brenda Engel and Sylvia Bailey were pleased to have 30 people attend the lasagna dinner which included a loonie auction, live music and an unexpected hostage taking and arrest of a masked man who burst into the dinner - which was all staged by the organizers. The event raised about $800.00.

FRIENDS OF OSPREY LAKE STRIKE AGAIN!
by Terry Tellier
Coordinator Roadside Cleanup
Friends of Osprey Lake
For the sixth year in a row 'The Friends of Osprey Lake' conducted their annual roadside cleanup.  The weather was perfect for 23 participants including our youngest that was 7 years old. Volunteers covered a total of 9 sections including the Princeton-Summerland Road, Trans-Canada Trail, two forestry campsites, several public boat-launches and community side-roads. This year they extended the cleanup to include Shinish Road to Jellicoe Road. The trash included but was not limited to; beverage bottles/cans, metal, wood products, cardboard, plastic bottles/bags, tobacco related litter, glass, auto parts and other landfill items.  The load filled the box of a pickup truck and weighed approximately 800 pounds. Our workday wrapped up at Tellier¹s for a pot-luck supper,  relaxing campfire and tales about the most unusual items collected. Many thanks go out to all the volunteer champions who help keep our area clean, safe and pleasant for all to enjoy.  Special appreciation goes to Norm Christman, Jill Pelland and Lynne Adams who transport, sort and dispose of the items for us. We are proud of our community and the Osprey Lake Association which posts cleanup information for us. Finally, we thank the town council of Princeton for waiving the landfill fees once again and helping make our event such a success.

PRINCETON RANCH HOSTS DOG EVENT
Jura Stock Ranch near Princeton hosted two interesting events this past weekend. On Friday, May 31st the BC All Breed Pointer Club presented the Canadian National Chukar Championship and on Saturday and Sunday June 1st and 2nd the club hosted their annual Spring Trial. A field trial is a competitive event at which hunting dogs compete against each other. In the Chukar Championship a live Chukar Partridge is used as the item for a dog to locate. The sleeping bird gently hidden in a location in a grass field. The dog and a handler then search for the bird, which is not harmed. The prize for Canadian Chukar Champion at Jura Stock Ranch was $1,000 plus a Rosette, a Perpetual Trophy and dog food provided by a sponsor. The Runner-Up received a Rosette and dog food. There were different categories of competition in the Saturday and Sunday events including Open Puppy, Amateur Shooting Dog, Open Derby and Open Shooting Dog. Susan Russell, CKC Pointing Breeds Rep for this region, told the News Leader last week that the events held in Princeton would not have been
possible without the assistance of the Crimmon Family (Jura Stock Ranch), Parker's Penticton and Eukanuba Dog Foods. A total of 12 dogs participated in the Chukar Championship and 52 were registered for the Saturday and Sunday events.

PSS Student of the Month! 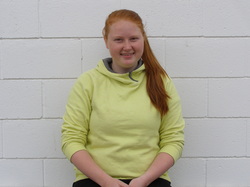 Copyright 2013 Bengel Publishing Inc
Ally Myers was selected PSS Student of the Month for May. She was nominated for her generous assistance to various causes setting a good example for all in the community that giving back as a volunteer brings rewards.

Ranch Goes To The Dogs! 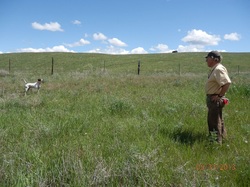 Photo: Brenda Engel
Jura Stock Ranch hosted the BC All Breed Pointer Club Canadian National Chukar Championship May 31st and a Spring Trail June 1st and 2nd. Handler Rick Steen of Vernon shows how to locate Chukar with his Pointer Strut's Rambling Man (Cole) on May 31st. Cole came to town as a two-time champion.