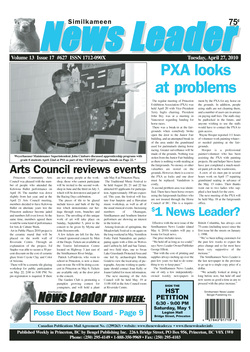 COUNCIL HATES TOWN HALL
At the April 19th regular meeting of Town Council, Councillor Frank Armitage began complaining about the inadequate space in Town Hall. He said there is no proper space for the staff to do their work, or for people using Town Hall for municipal woek such as the building inspector, bylaw officer and others doing business with the Town.

LIBRARY CLOSES FOR MOVE
The Princeton Branch of the Okanagan Regional Library located at 167 Vermilion Avenue will be closing at 1:00 PM on Saturday, May 1 to prepare for the move to its new location one block down the street. The new branch will be open to the public on Saturday, May 8 at 10:00 AM.

POSSE ELECT NEW EXECUTIVE
The Princeton Posse Junior B Hockey Club hosted their annual general meeting April 20th at Riverside Centre. A lot has happened to the community-owned hockey team in the past year including construction of a new players lounge, the purchase of a team bus, a bookkeeper and accountant handling financial duties, a newly-designed website and a team that set a franchise record for wins and went further in the playoffs than any Posse team before it.

ARTS & CULTURE WEEK WAS A SUCCESS
Arts & Culture Week in Princeton began April 18 and ended April 25. Mayor Randy McLean, attending his first ever ballet performance, opened the event with high praise for the Arts Council for their efforts to enhance the cultural aspects of the community.

YES 2 IT Wraps Up 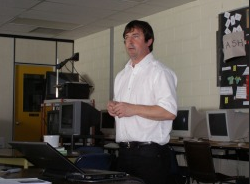 Copyright 2010 Bengel Publishing Inc.
Princeton Secondary School teacher John Kitts addresses Grade 8 students prior to the final presentation of the YES 2 IT program on April 22nd. This past month a total of 42 Grade 8 students learned about trades available in the community ranging from meat cutting and carpentry to hairdressing and electrical and plumbing careers. 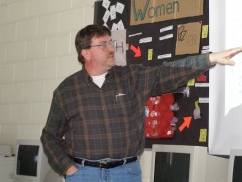 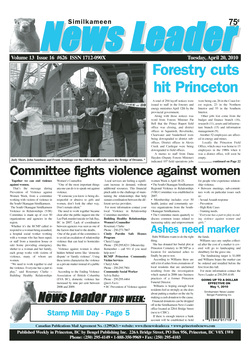 FORESTRY CUTS HIT PRINCETON
A total of 294 layoff notices were issued to staff in the forestry and energy ministries April 12th by the provincial government. Locally, the Princeton Field Office, which once was home to 15 employees in the 1980s, will soon be empty.

ASHES NEED MARKER
Babs Williams wants to do the right thing. She has donated her burial plot at Princeton Cemetery to RCMP as a location for unclaimed ashes to finally be put to rest. She is hoping enough local residents feel as strongly as she does by making a financial contribution to the cause.

GARDEN CLUB GEARS UP FOR SPRING
The Garden Club is planning a pumpkin growing contest for school children. Members are also busy starting plants to fill the planter boxes in front of the Seniors Centre on Angela Avenue. The group meets the third Thursday of the month at 1:00 PM at the Seniors Centre.

POTTERS GUILD HOSTS WORKSHOP
The weekend of April 10 & 11 saw potters from the Similkameen area gather at Riverside Centre to learn clay-working techniques demonstrated by Pat Webber. For more information on the Potters' Guild contact Sue at 250.295.0527 or Marjorie at 250.295.6718. 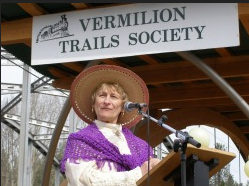 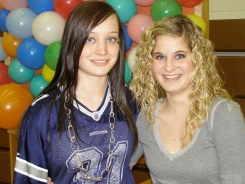 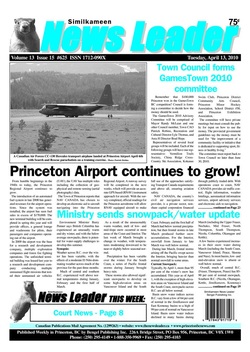 TOWN COUNCIL FORMS GAMESTOWN 2010 COMMITTEE
Remember that $100,000 Princeton won in the GamesTown BC competition? Council is forming a committee to decide how the money should be used.
The GamesTown 2010 Advisory Committee will be comprised of Mayor Randy McLean and one other Council member, Town CAO Patrick Robins, Recreation and Cultural Director Lyle Thomas, and Area H Director Brad Hope. Representatives of several local groups will be included. Each of the following groups will have one representative: Vermilion Trails Society, China Ridge Cross-Country Ski Association, Kokanee Swim Club, Princeton District Community Arts Council, Princeton Minor Hockey Association, School District #58, and Princeton Exhibition Association. The committee will have private meetings but must consult the public for input on how to use the money. The provincial government guidelines say the money must be used for “the improvement of a community facility or initiative that is dedicated to supporting sport, fitness or healthy living.” The committee must report back to Town Council no later than June 30, 2010. 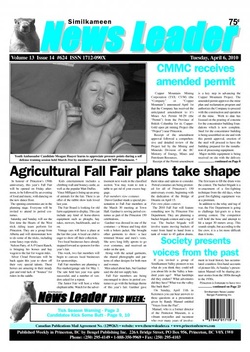 FALL FAIR PLANS TAKE SHAPE
In honour of Princeton’s 150th anniversary, this year’s Fall Fair will be opened on Friday afternoon, to be followed by an evening of food and music, with dancing on the new dance floor. The opening ceremonies are in the planning stage. Everyone will be invited to attend in period costumes. Saturday and Sunday will see the
first time the Hearts of the West trick riding team perform for Princeton. They are a group from Alberta and will demonstrate how to do some of the tricks, including some fancy rope tricks. Nelson Patry, of A-P Guest Ranch, is bringing his horses and hay wagon to the fair for wagon rides. Silver Cloud Peruvians will be
back again this year to show off their very special talents. These horses are amazing in their steady gait and total lack of “bounce” for riders in the saddle.
Kids entertainment includes a climbing wall and bouncy castle, as well as the popular Matt Duffus. Vince Milligan is lining up an array of animals for the fair. There is an offer of the rabbit show kids loved last year.
The Fair Board is looking for old farm equipment to display. This can include any kind of horse-drawn
equipment such as ploughs, hay rakes, mowers, buckboards, and so on. Vintage cars will have a place at the fair this year. Alocal car club is eager to show off their collection. Two local businesses have already stepped forward as sponsors for this year’s fair. This week, two fair members will begin to canvass local businesses for sponsorships. Fall Fair members are planning a flea market/garage sale for May 1. The sale held last year was quite successful, and a number of vendors asked for a repeat. The Junior Fair will host a white elephant table. Watch for the advertisement next week in the classified section. You may want to rent a
table to get rid of your excess baggage.