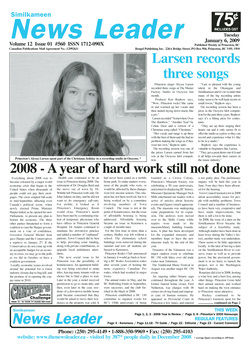 LARSEN RECORDS THREE SONGSPrinceton singer Alyssa Larsen recorded three songs at The Master Factory Studio in Osoyoos last month. Producer Ken Repkow says, “Wow, Princeton rocks! She came in and warmed up her vocals and then started laying down tracks like a pro.” Larsen recorded “Somewhere Over The Rainbow,” “Another Year” by
Celine Dion and a version of a Christmas song called “Chestnuts.” “Her vocals and range is up there with the best of them and she had no problem making the songs as if they were her own,” Repkow adds. The recording session was one of the prizes Larsen earned from her win at the Osoyoos Idol competition. “I am so pleased with the young talent in the Okanagan and
Similkameen and it’s no wonder that many of the big recording artists today seem to be well kept secrets in
small towns,” Repkow says. The recording session has been a prize in the Osoyoos Idol competition for the past three years. Repkow says it’s a fitting prize for contestants. “They are up there singing their hearts out and it only seems fit to offer the studio as a prize so they can record and experience what it’s like to be in a studio.” Repkow says the experience is valuable to beginners like Larsen. “They get a great demo out of it and it all helps towards their careers in the music industry.” 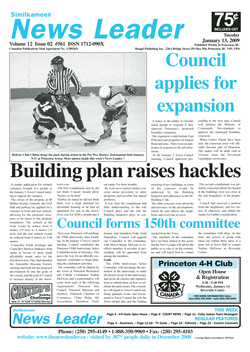 COUNCIL APPLIES FOR EXPANSIONA notice to the public in October asked people to respond if they opposed Princeton’s proposed boundary expansion. The expansion would include East
Princeton and properties on Airport Road and area. There were no petitioners in response to the advertisements. At the January 5 Town Council meeting, Council approved proceeding to the next step. Council will petition the Ministry of Community Development to approve the municipal boundary
extension. When Letters Patent have been sent, the extension areas will officially become part of Princeton.
The matter will be dealt with in Victoria when the Provincial Legislature reconvenes 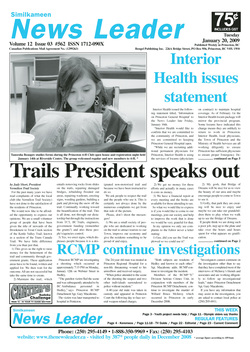 RCMP CONTINUE INVESTIGATIONSPrinceton RCMP are investigating a shooting which occurred at approximately 7:15 PM on Monday, January 12th on Webster Street in Hedley. “The gunshot victim fled the scene and was subsequently attended to by BC Ambulance personnel in Hedley,” says Princeton RCMP Detachment Sgt. Gary Macahonic. The victim was later transported to hospital in Penticton. The 24-year old man was treated at
Princeton Regional Hospital for a non-life threatening wound to his arm/elbow and received surgery. “When police attended to the scene of the shooting the suspect and two other individuals surrendered to police without incident.” A40-year old male was taken in
custody and appeared in Penticton Court the following day to face several weapon-related charges. “Both subjects are residents of Hedley and known to each other,” Sgt. Macahonic adds. RCMP continue to investigate the incident. Members of the RCMP “E”
Division Serious Crimes Unit, in conjunction with members of the Princeton RCMP Detachment, continue
to investigate the murder of Willard Bruce McInroy which occurred in Princeton in early December 2008.
“Investigators cannot comment on the investigation other than to say that they have completed most of the interviews of McInroy’s friends and associates and are working diligently to follow up investigational leads,” states Princeton Detachment Sgt. Gary Macahonic. If you have any information that may assist in the investigation, you are asked to contact local police at (250) 295-6911. 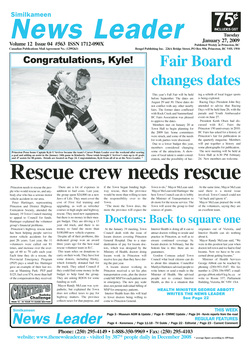 FAIR BOARD CHANGES DATESThis year’s Fall Fair will be held before September. The dates are August 29 and 30. These dates do
not conflict with any other nearby fairs. The former dates conflicted with Rock Creek and Summerland. BC Fairs Association was pleased to approve the dates. Members met on January 20 at
Town Hall to begin planning for the 2009 fair. Some committees were struck, and some of the needs for work parties were discussed. Due to a lower budget this year, members considered changing some of the attractions. A showcase of local talent is under consideration, and the possibility of having a rebirth of local logger sports is being explored. Racing Days President John Bey attended to advise that Racing Days will be held June 26, with the parade and Youth Ambassador event on June 27. President Keith Olsen had discussed with B.C. Fairs the Princeton 150 anniversary in 2010. BC Fairs has asked for a history of Princeton’s fair for publication in the quarterly magazine. Members will put together a history and some photographs for publication.
The next meeting will be held at Town Hall at 6:30 PM February 24. New members are welcome.