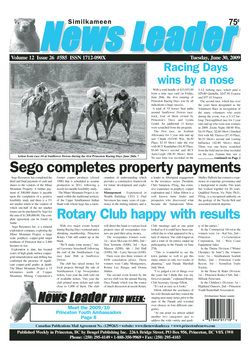 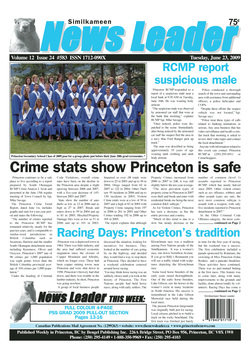 PROGRAMS CONTINUE TO SUCCEED
Nadine McEwen presented a Community Recreation and Culture Programming update at the June 15th regular meeting of Town Council. The Movie Theatre program at Riverside Theatre, where recently released movies are shown for a nominal fee, has attracted anywhere from 50 to 100 during the winter and early spring months. “As soon as June 1st hit and the warm weather our numbers dropped,” McEwen noted, but added the program will only be altered slightly as there is still interest being shown. There will only be one movie featured per month in July and August with that to increase in September. As for other programs, McEwen reported the winter and spring programs were successful. “The Recreation Department offered a variety of programs for preschoolers, children, youth and adults.” A total of 28 programs were offered between January and June with only six cancelled due to low registration figures. Summer Program registration has started and a variety of day camps for children and youth are being offered. McEwen says the day camp format has proven to be far more successful than two-day, weekend or weeklong programs although the schedule does include a 4-week dance program for pre-teens and youth. Other programs include the traditional Adventure Camp, a Professional Soccer Camp and the 11th annual Aaron Heuser Memorial Basketball Camp as well as many other programs of interest to all ages. 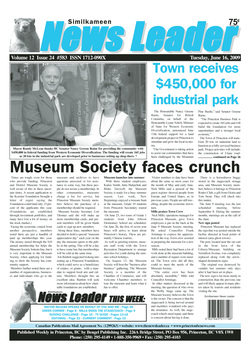 MUSEUM GAINS PUBLICITY
Princeton’s museum will benefit from publicity from more than one source. John Mitchell will be in Princeton this week to continue work on a piece on Princeton museum and Princeton’s 150th anniversary of founding. The museum will be featured on YouTube. Jan Bozenilek, a film maker, is interested in making a film about Princeton’s 150 celebration next year, and will be working with Nick Mills and staff at the museum. Two of the Museum Society Directors, Jon Bartlett and Rika Ruebsaat, attended the annual conference of the BC Historical Society in Nelson. They gave a presentation about the activities of Princeton’s Museum Society, told about the Similkameen Historical Society resuming active status, and talked about their own work with traditional music. They are preparing a book of songs and poems found in Princeton’s newspapers (more than 100 years’ worth). Bartlett said they were warmly received by members of the BC Historic Society. Many had fond memories of Margaret Stoneberg, longstanding Princeton archivist, who attended most of these annual conferences. Travel writers are coming to Princeton and will be taken to many locations in the area. Their guide will be Kelley Cook, who always does a great job of promoting the area. Every little bit of publicity helps the museum, and will attract people to Princeton, thereby benefiting the town.

PXA PLANS FENCE PROJECT
The continuous upgrading of Princeton’s fairgrounds/horse racing/ rodeo facility includes replacement of the front fence this year. John Bey, President of Princeton Exhibition Association, the volunteer facility management group, says the front fence is all they can afford now. More than $100,000 has been spent during the past couple of years on upgrades to the facility. The grounds and concession buildings are ready for the ATV/BC weekend of fun beginning this Friday. An ATV parade is planned for Friday afternoon. A barbecue is the focus of fun on Saturday evening, with a celebrity dunk tank featuring Councillor Jason Earle as the “dunkee” to raise funds for a local charity. The ATV buffs will spend the rest of their time following trails in the area and learning about local terrain. The race track is ready for the big race meet on June 26, and the rodeo grounds will be ready for Little Britches Rodeo on July 18. Bey says everything is running smoothly. 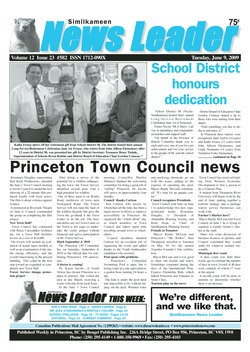 COUNCIL NIXES GARDEN GRANT
Town Council had been approached by the group building the community garden. The group asked for “in kind” donations if possible, and for a $2,000 grant. On June 2, Council reviewed the request. There was a lot of discussion about whether just materials should be given, or whether the $2,000 grant should be included. Councillor Jason Earle was opposed to giving the grant, and Councillor Marilyn Harkness agreed with him. Councillor Ray Jarvis and Mayor Randy McLean were in favour of giving the $2,000 as well as the materials. Both the mayor and Councillor Jarvis noted that the previous Town Council, of which they were members, had encouraged the development of a community garden. When it came to a vote, Council was willing to let the group have materials stored in the works yard. These materials included interlocking sidewalk bricks, some lumber, and 45 gallon drums for garbage cans. Council agreed to give them a composter. However, the motion to approve said the donation would be limited to these materials. Councillors Frank Armitage, Jason Earle and Marilyn Harkness voted in favour, with the mayor and Councillor Jarvis opposed. Mayor McLean asked that his negative vote be recorded.

SCHOOL DISTRICT HONOURS DEDICATION
School District 58 (Nicola-Similkameen) hosted their annual Long-Service/Retirement Celebration June 1st in Princeton. Fraser-Nicola MLA Harry Lali was in attendance and congratulated teachers and support staff. “On behalf of the Province of British Columbia thank you to each and every one of you for your achievement and for your service to the people of BC and the school district.” District Board of Education Chair Gordon Comeau shared a tip to those who were retiring from their duties. “Find something you like to do, dig in and enjoy it.” In Princeton three retirees were recognized. Janet Taylor (14 years) and Kathy Froese (13 years) from John Allison Elementary, and Linda Neumann (14 years) from Vermilion Forks Elementary. Other Long-Service honours were presented to: 30 Year Pin : Hank Rabe (Maintenance). 25 Year Pin: Mary Masiel (Board Office TOC). 20 Year Pin: Mary Bell (Princeton Secondary), Deborah Barth (John Allison Elementary), Kathi Koller (Vermilion Forks Elementary). 10 Year Pin: Carol MacDonald (Princeton Secondary School - Noon Hour Supervisor). 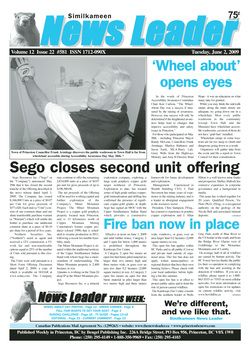 WHEEL ABOUT OPENS EYES
In the words of Princeton Accessibility Awareness Committee Chair Ken Carlson, “The Wheel-About Day was a success if measured by the raising of awareness. However, true success will only be determined if the heightened awareness helps lead to changes that improve accessibility and safety issues in Princeton.” For those who participated on May 28th - including Princeton Mayor Randy McLean, Councillors Frank Armitage, Marilyn Harkness and Jason Earle, MLA Harry Lali, Gerry Wells from the Highways Ministry and Area H Director Brad Hope - it was an education on what many take for granted. While you may think the sidewalk ramps along the main streets are adequate, try going down one in a wheelchair. Most every public washroom in the community (except Town Hall and the Museum) have wheelchair accessible washrooms, yet most of those do not have ‘grab bars’ installed. Wheelchair ramps in some locations are far too steep to climb and dangerous going down as a result. Organizers will gather data from the event and file a report to Town Council for their consideration.